ExplainSpeaking: How should public sector banks be privatised? 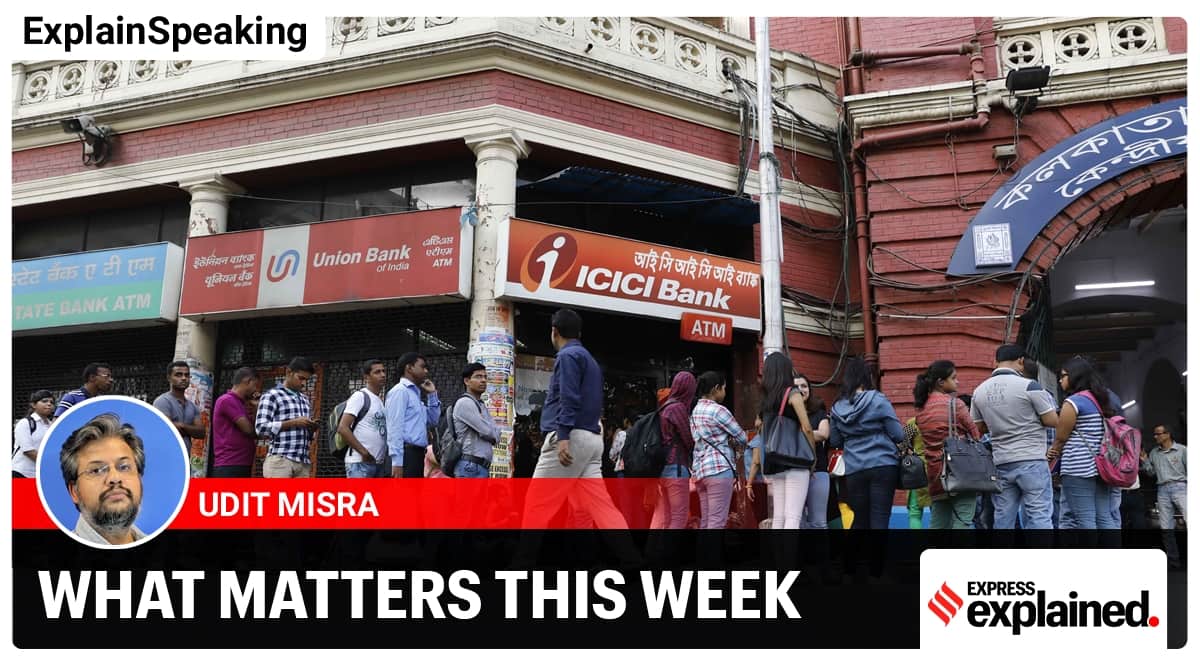 Research shows that it is best to focus on achieving a mix of public and private banks that serve the needs of a diverse economy such as India. (Express File Photo by Partha Paul)

This week, we will approach the same topic albeit by using a more contemporary concern: The privatisation of public sector banks. That’s because — for better or worse — bank nationalisation has already happened in the past. What matters now is to assess if it needs to be addressed by a summary reversal — overnight turning over all PSBs to the private sector — or some other alternative, which might either involve privatising some while keeping others in the public sector fold and might also involve stretching out the process of privatisation.

The answer, as usual, depends on the policy goal one is trying to achieve.

Over the past decade, India’s public sector banks have struggled with high levels of non-performing assets (NPAs). Simply put, NPAs are loans that the borrower fails to pay back to the bank. Predictably, high levels of NPAs erode a bank’s profitability. In the case of many a PSBs, it even meant that the RBI, which is the banking sector regulator, had to restrict the normal functioning of the banks — this is referred to as the banks being put under Prompt Corrective Action (or PCA) — and forced them to improve their financial performance metrics before being allowed to resume normal banking activities.

High levels of NPAs, and the ensuing actions, meant that PSBs struggled to finance India’s growth needs. The government even had to recapitalise many PSBs to ensure that they stayed in business.

Understandably, there were growing demands that instead of wasting taxpayers’ money to recapitalise PSBs, the government should simply sell them off to the private sector. Doing so would reduce the financial burden on the government while also ensuring that PSBs become more efficient and profit-making entities under private ownership.

By 2021, the government had reached a point that, in the Union Budget 2021-22, it announced its decision to start by privatising two PSBs.

The case for rapid and wholesale privatisation of PSBs

A recent paper by Poonam Gupta of NCAER and Arvind Panagariya of Columbia University, titled “Privatization of Public Sector Banks in India Why, How and How Far?”, argues that “the government should move as rapidly as politically feasible”.

According to Gupta and Panagariya, all PSBs should be privatised. But they also realise that this might be a tad too drastic for any government in India to do. As such, they suggest privatising all except the State Bank of India.

“In principle, the case for privatization we have made applies to all PSBs including SBI. But we recognize that within the Indian economic framework and political ethos, in the foreseeable future, no government will want to be without a single PSB in its portfolio,” they state.

In their paper, Gupta and Panagariya point to several metrics to show that private sector banks (PVBs) are far more efficient, far more productive and far less corrupt than the PSBs.

For instance, as Chart 1 shows, PVBs (shown by the red line) have lower gross NPAs. Chart 2 shows that between 2014-15 and 2020-21, PVBs had a greater contribution towards extending loans. They also had a higher percentage of contribution to getting deposits from savers. 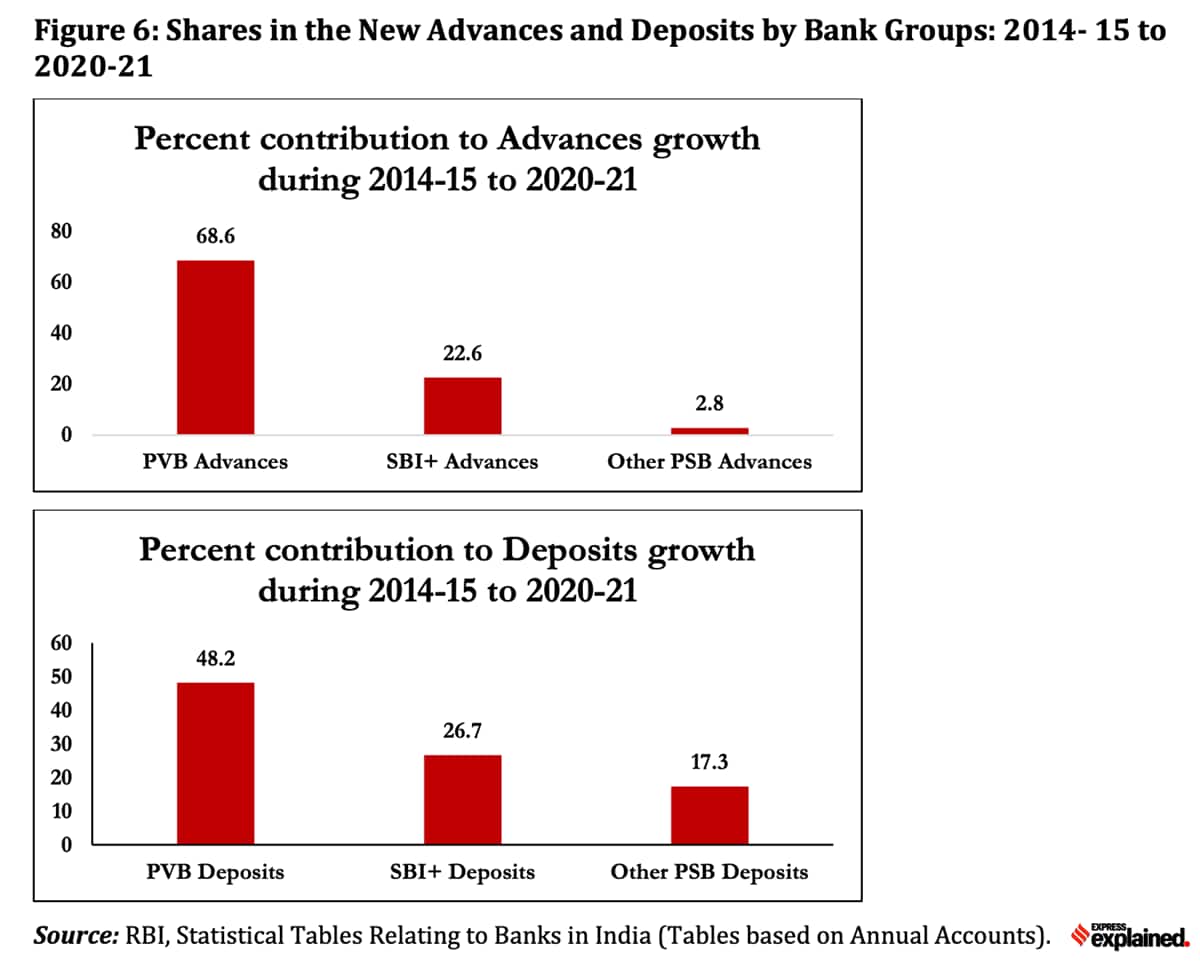 Chart 4 shows that more often than not public sector banks have been disproportionately guilty of fraud. 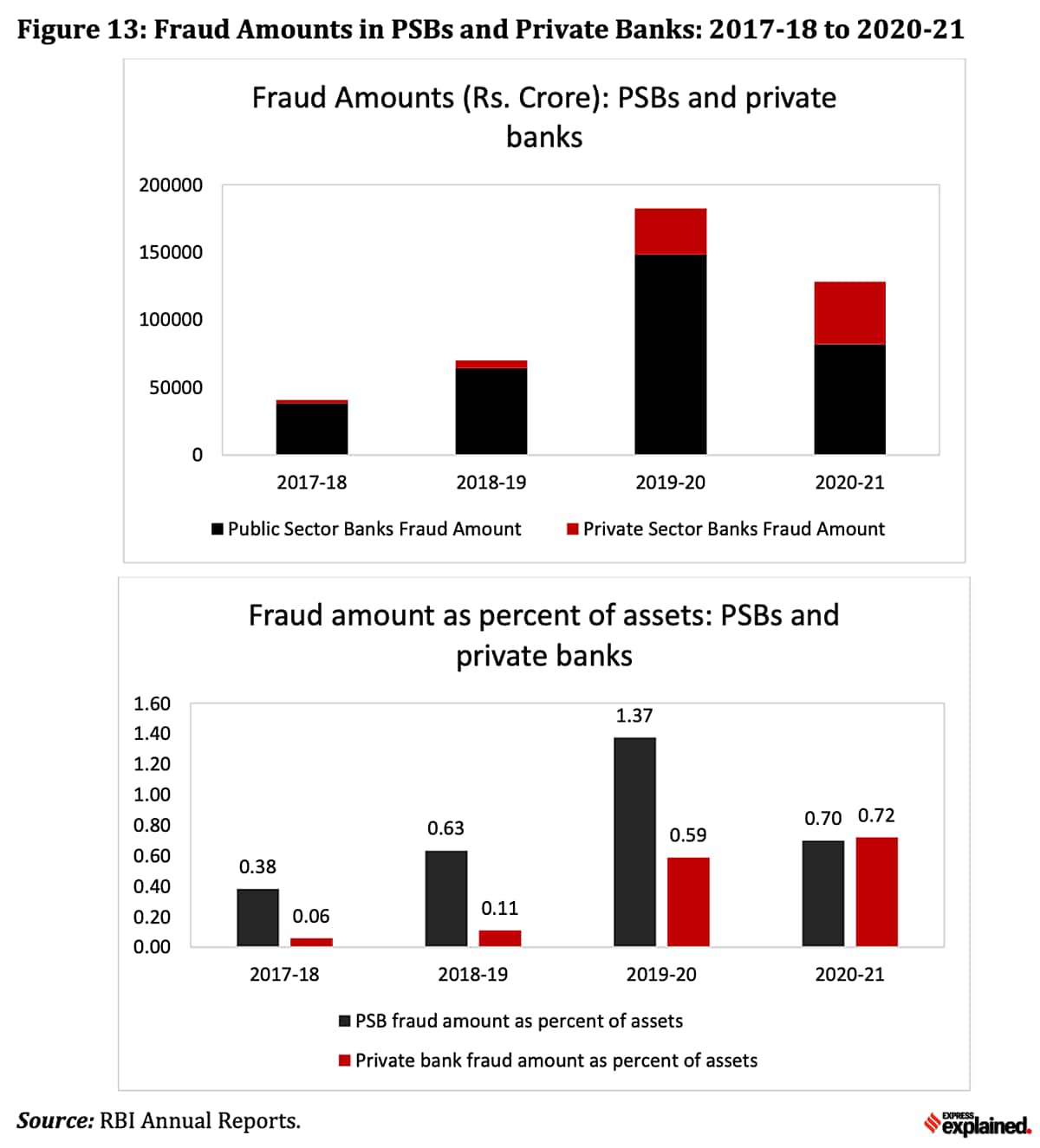 And lastly, Chart 5 shows that all of this shows up in the stark difference in the market capitalisation of the PSB and PVBs. This is why Gupta and Panagariya argue that the government should not just privatise one or two but all and do so as quickly as possible.

“The reason is that private banks are now clearly outperforming PSBs. It is quite unlikely that this trend will reverse in the coming years. The implication is that privatization of the banking sector as opposed to PSBs themselves is well under way and therefore the latter face a real threat of value destruction over time as has been the case with public carriers in telecom and airline sectors. Going by the past history, there also remains a strong possibility that the longer the government holds on to PSBs that it eventually plans to privatize, the more taxpayer money it would end up sinking into yet more rounds of recapitalization. On the other hand, the sooner the government places PSBs in the private hands, the sooner will they reach their true potential market value and the larger will be the recovery from them,” they state.

The case for a cautious and gradual approach to privatisation

The data provided by Gupta and Panagariya provides a compelling case for rapid and wholesale privatisation. But is it such an open and shut case?

In a paper titled “Privatisation of Public Sector Banks: An Alternate Perspective”, members of RBI’s Banking Research Division warn against the conventional perspective of viewing privatisation as a panacea for all ills. The paper, which was released last week as part of the RBI’s August Bulletin, urges people to employ a more “nuanced approach”.

In fact, in their view, “a big bang approach of privatization of these (public sector or government-owned) banks may do more harm than good”.

To buttress their claim, RBI’s researchers compare and contrast the performance of PSBs and PVBs over different metrics. They look at data since 2010 — evidently, the time when PSBs have been at their weakest.

The metrics can be summarised in three broad categories:

1. Who between PSB and PVBs is socially more relevant in India?

Readers may recall that the whole point of nationalising banks, to begin with, was to reach out to those sections of the society and economy which are typically ignored by private sector banks. Chart 7: The distribution of ATMs of private and public sector banks across rural, semi-urban, urban and metro centres

Another way to track social relevance is to look at who is better at bringing about financial inclusion. Table 1 provides the details of the beneficiaries in the Jan Dhan Yojana. Pradhan Mantri Jan Dhan Yojana (PMJDY), envisages universal access to banking facilities with at least one basic banking account for every household. Private sector banks accounted for just 1.3 crores of the total of almost 46 crore beneficiaries. 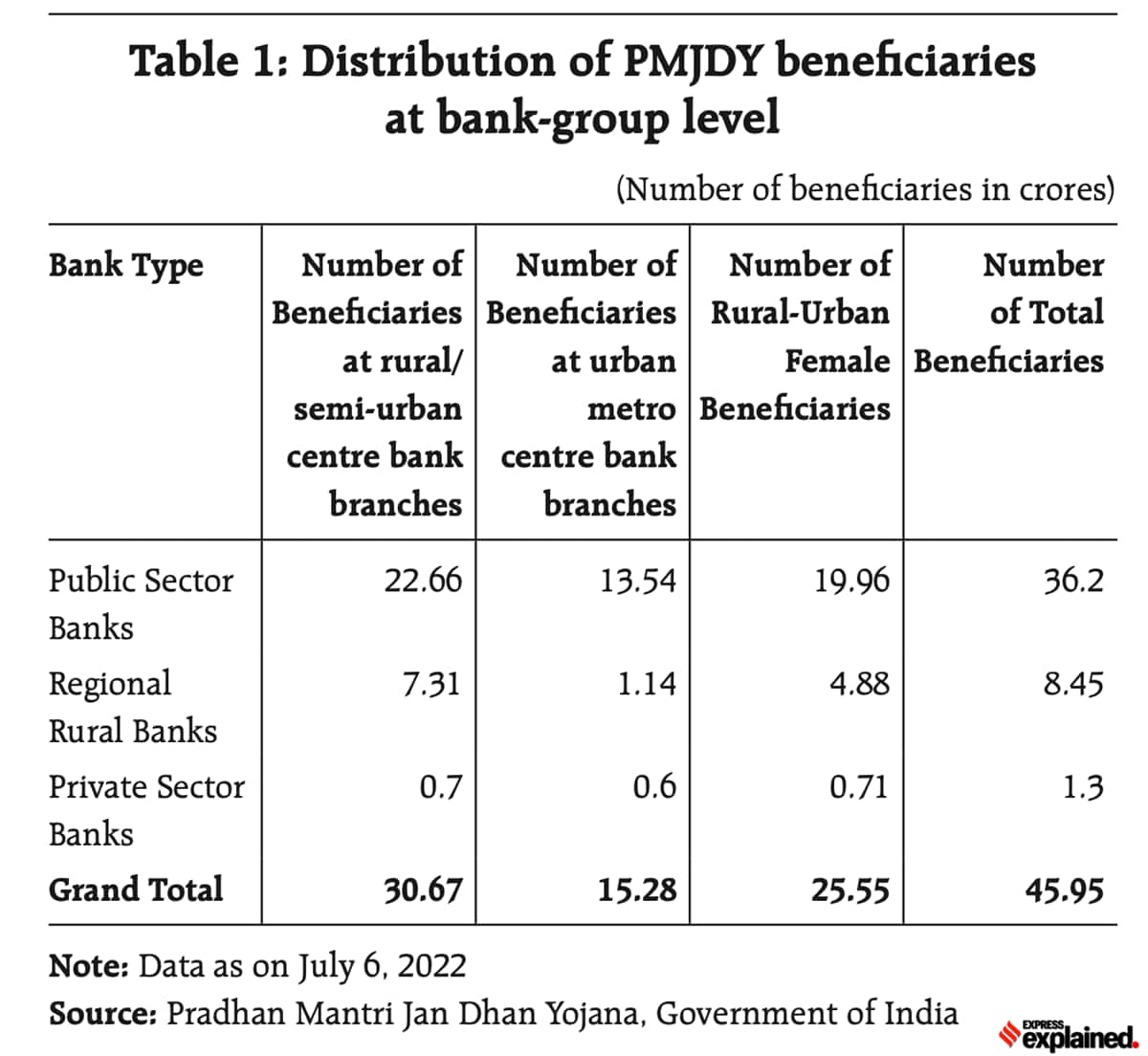 2. Who is more efficient?

This is possibly the most surprising result. RBI researchers have shown that contrary to public perception, PSBs are more efficient than PVB, provided one is looking at the metrics for which PSBs were created.

Chart 8 maps the efficiency scores of PVBs (blue bars) and PSBs (orange bars). In the top panel, PVBs outscore PSBs because the intended output is to have higher incomes. But in the next two panels, the story changes completely. Chart 8: In the first panel, PVBs outscore PSBs because the intended output is to have higher incomes

“The results suggest that when profit maximisation is the sole motive, efficiency of the PVBs has always surpassed that of their public sector counterparts (top panel). However, when the objective function is changed to include financial inclusion—like total branches, agricultural advances and PSL advances— PSBs prove to be more efficient than PVBs (middle and bottom panel),” state the RBI researchers.

3. Who is more relevant to the economy?

When the times are good, any bank will extend fresh loans. The crucial test of banking comes when it can extend loans in a counter-cyclical manner— that is when the economy is down. Similarly, if one is asking for a loan for an established industry, it is much easier to get a loan. But few banks will extend a loan if one wants a loan for some new-age low-carbon industry or even for an infrastructure project because perhaps there is a greater chance of failure or the gestation period is too long. But from the perspective of the economy, the relevance of banking lies in knowing whether banks lend when borrowers need the money the most and whether they lend the money for initiatives that are attempting to break new ground.

“Infrastructure finance has been a bottleneck in the country’s development and growth. PSBs have a lion’s share in these lendings and their role has been especially crucial against the backdrop of withering away of erstwhile development financial institutions (Chart 9),” they state. Similarly, RBI researchers found that PSBs are also more effective in monetary policy transmission, aiding the countercyclical monetary policy actions to gain traction. “During the last easing cycle for example, their reduction in lending rates was substantially higher than that of PVBs (Chart 10). At the same time, their deposit rates were relatively stickier as compared with PVBs,” they state. 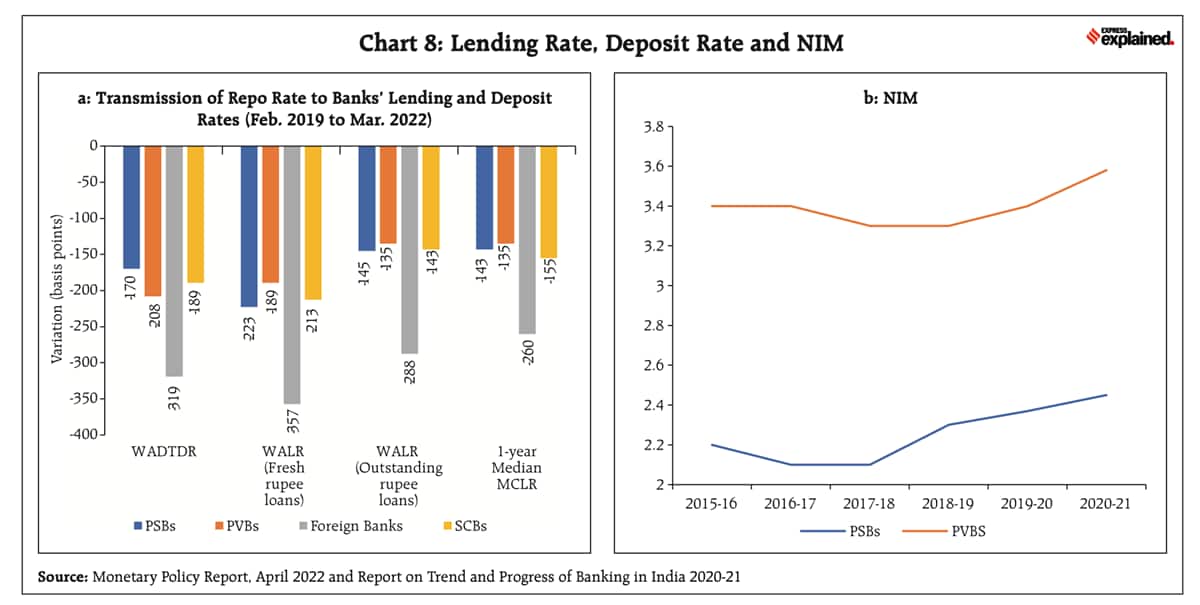 The resultant higher Net Interest Margins (NIMs) of PVBs is an indication of their profit maximization objective (Chart 10 above). “On the other hand, by playing a crucial role in monetary transmission, the PSBs have contributed to larger social goals,” find the RBI staff.

As a result, RBI’s research paper concludes: “In line with recent research, which suggests that ‘private ownership alone does not automatically generate economic gains in developing economies’ and ‘a more cautious and nuanced evaluation of privatization is required’… this article also recommends gradual approach to privatization”.

The decision to overnight nationalise all private banks of any consequence was driven by ideology. A monopoly of public sector banks had its pitfalls. Since 1991, as India moved away from that ideological stance, every section of the economy has benefited from the rise of the private sector in banking.

However, what the RBI researchers have shown is that mirroring the same haste in privatising all PSBs will also be sub-optimal. It is best to steer clear of an ideologically-driven stance and instead focus on achieving a mix of public and private banks that best serves the needs of a diverse economy such as India.

And I hope you caught the last two episodes of The Express Economist. One was a discussion on freebies and the other on why India is no country for working women.