What the dry, cold winter (so far) indicates for the rabi crop

Conditions this winter have so far been ideal for wheat, but not that good for mustard. It is comforting that rice stocks are currently adequate and global wheat prices are low. The wheat that was sown before mid-November is now in the “boot” stage, where the earheads are forming at the top of the plants. (Express/File Photo)
Listen to this article
What the dry, cold winter (so far) indicates for the rabi crop
x
00:00
1x 1.5x 1.8x

2021-22 was the Year of Climate Change for Indian agriculture. Every single month from September 2021 to January 2022 recorded excess rain, which significantly damaged the post-monsoon kharif crop at the time of harvesting. This was followed by the hottest March in 122 years. The sudden mercury surge after mid-March took a heavy toll on the standing wheat that was in the final ripening and maturity stage.

2022-23 has been quite different. Rainfall was 37.4% below the all-India average in November, with the corresponding deficits at 14.5% for December and 57.5% during January 1-22. The shortfalls have been greater in northern, central, and western India, where much of the rabi winter-spring crops — especially wheat, mustard, chana (chickpea), and masur (red lentil), as also maize, potato and onion — are grown.

Also Read |The International Year of Millets: how India’s govt can promote the cereals in 2023

The India Meteorological Department has forecast “scattered to fairly widespread rainfall accompanied by thunderstorm activity” over Punjab, Haryana, Delhi and Uttar Pradesh during January 24-26, besides “light isolated” rain over north Rajasthan and Madhya Pradesh. A fresh western disturbance is expected to bring more rain over northwest India from January 27.

But overall, it’s been a cold and dry winter so far, unlike the last time.

How will this impact the rabi crops?

Farmers have sown wheat on 341.13 lakh hectares (lh) this time, as against 339.87 lh in 2021-22, and a normal area of 304.47 lh. That should ordinarily translate into bumper production — required particularly in the context of annual retail cereal inflation hitting 13.79% in December and wheat stocks in government warehouses on January 1 at a six-year-low. (See chart) Wheat and rice stock in government warehouses on January 1.

But given that harvesting is more than two months away — and knowing the havoc untimely heavy rain and hailstorms (as in March 2015) or early onset of summer (March 2022) can wreak — making any output predictions based on crop acreages is fraught with risk.

For now, policymakers can take comfort from two things.

The first is the more-than-adequate public stocks of rice to meet the public distribution system’s requirements, before the new wheat crop arrives from April. The second is international wheat prices, which have eased considerably from their March-May highs immediately after Russia’s invasion of Ukraine. Prices at the Chicago Board of Trade futures exchange are ruling at their lowest since September-October 2021. (See chart) 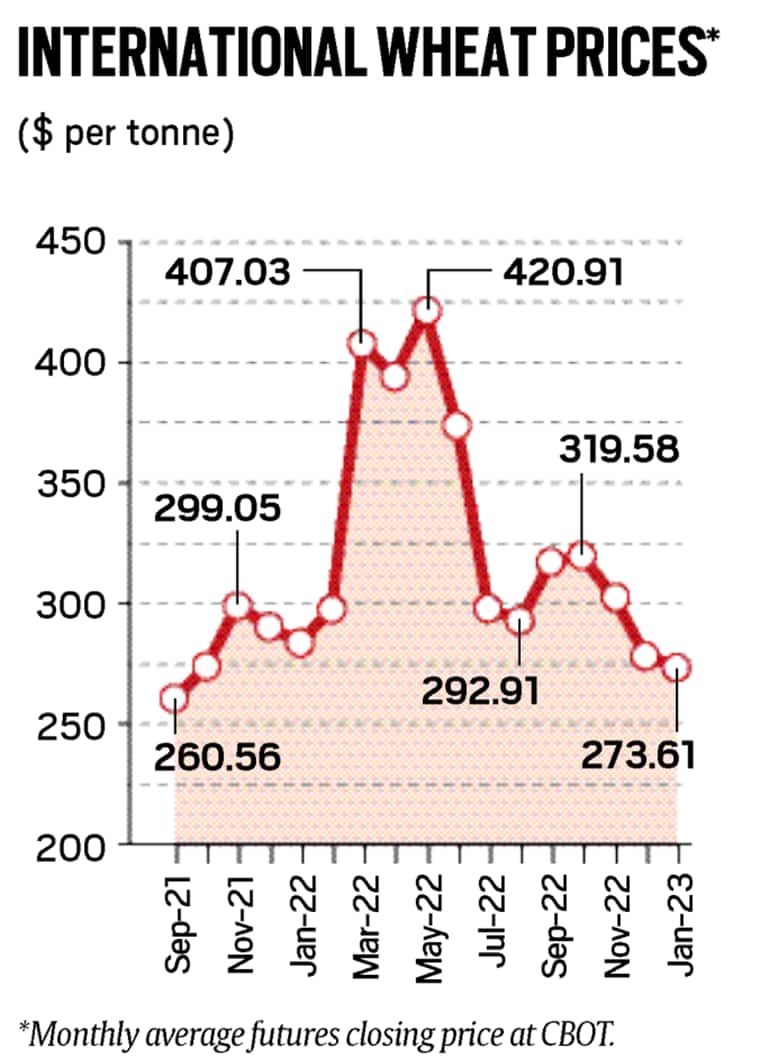 These comfort factors may not, however, suffice in the event of a crop failure similar to last year’s — which led to wheat procurement by government agencies plunging to 187.92 lakh tonnes (lt), from 433.44 lt during the preceding marketing season (April-June). A second consecutive poor crop, forcing India to import, could well drive up global prices again.

What is the current crop condition?

The wheat that was sown before mid-November is now in the “boot” stage, where the earheads (which bear the flowers and eventually grain) are forming at the top of the plants. Heading (when the earheads fully emerge from the stem) and flowering (pollination) happens within 90-100 days from sowing, which is followed by about 25 days of early kernel formation (“milk” stage) and another 15 days or more of grain-filling (“dough”).

“The crop is looking very good. The combination of sunny skies and low night temperatures that we are having is just right for wheat,” Rajbir Yadav, principal scientist at the New Delhi-based Indian Agricultural Research Institute (IARI), said.

Advertisement
In Express Explained |Why has wheat flour become so expensive in Pakistan?

However, he added that rain would be welcome at this time: “It will provide growth momentum to the crop by cooling the canopy and enabling natural nitrogen fixation.”

Pritam Singh, a farmer from Urlana Khurd village in Haryana’s Panipat district, claimed that light showers along with thunderstorms now would be equivalent to applying 15 kg of urea per acre. Rainwater will also wash away the dust and pollutants deposited on leaves; it is also purer than groundwater that may contain salts and other contaminants.

Further, it will save irrigation costs. Wheat needs around four irrigations, and up to five or six if there is no rain. “Irrigating one acre takes 5 hours and 1-1.5 litres of diesel per hour. So, for every extra irrigation, you burn an additional 5-7.5 litres at Rs 90/litre,” Singh pointed out.

What is the situation with mustard?

Farmers have planted an all-time-high area of 91.56 lh under mustard, compared to 84.47 lh in 2021-22, and the normal average of 63.46 lh. Unlike with wheat though, the dry and cold winter has not been beneficial for mustard.

The reason: Mustard, which is generally sown by October-end, starts flowering after 50-60 days and forming siliqua (pods containing seeds) over the next 35-40 days. The severe cold wave conditions prevailing over Rajasthan, Haryana, Punjab, Delhi, Uttar Pradesh and northern Madhya Pradesh during January 15-18 is believed to have caused frost damage to the crop in many areas.

Advertisement
Also Read |Under what emergency powers has the BBC documentary on Modi been blocked?

Mustard was vulnerable because siliqua/ pod development has been advanced in its case — as opposed to wheat, where even flowering is yet to commence.

While clear sunshine in the morning and a sharp dip in night temperatures to near freezing point isn’t bad for wheat in the tillering/ booting stages, it can be disastrous for mustard. The extent of injury or rupture of the pods due to cold shock and frost — ice crystals forming inside the plant tissues — is still not known.

“We are getting reports from the ground and assessing how much damage has been done. Thankfully, the cold wave has abated after January 19, and there have been no further frost attacks. One must also pray for only light rain and no hail or strong winds that could lead to lodging (bending) of the crop,” Pramod Kumar Rai, head of the Directorate of Rapeseed-Mustard Research at Bharatpur (Rajasthan), told The Indian Express.

Mustard is harvested by March-end, with seed-filling and ripening taking place in the last 45-50 days.

Has chana been affected too?

Chana is the second biggest rabi crop by area, with farmers sowing 110.91 lh. That’s down from last year’s 112.65 lh, but higher than the normal area of 98.86 lh. Sowing stretches from end-September (in Karnataka and Andhra Pradesh) to October (Maharashtra, Madhya Pradesh, Rajasthan, and Gujarat) and the first fortnight of November (Uttar Pradesh, Haryana, and Punjab), with the crop duration also extending from 100-110 days to 120-130 and 130-140 days in these three regions.

“There has been no loss from frost, as flowering will start only towards end-January/early-February and pod-setting 25-30 days after that. The crop condition is good, but rain will be helpful at this point,” Shailesh Tripathi, principal scientist and chana breeder at IARI, said.

Draft amendments to IT rules: A looming censor