Daijosai ritual: Why Japanese Emperor Naruhito spent a night with the sun goddess

Sensationalised headlines surrounding the ritual were published days before and after the ceremony claiming the Emperor was “spending the night” with a goddess, but there is little known about what actually occurs during the ritual. 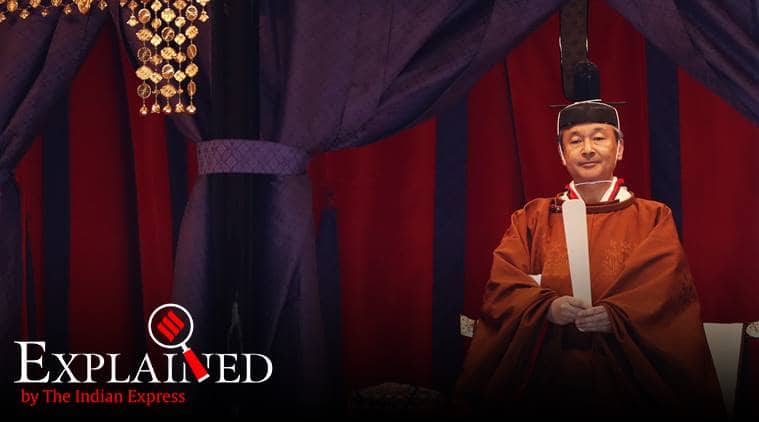 Emperor Naruhito attends a ceremony to proclaim his enthronement to the world, called Sokuirei-Seiden-no-gi, at the Imperial Palace in Tokyo, Japan, Tuesday, October 22, 2019. (Issei Kato/Pool Photo via AP)

Last weekend, Japan’s Emperor Naruhito underwent the last remaining steps to complete his rituals of accession. As part of his enthronement ceremony that began on October 22, Naruhito took part in the ‘Daijosai’ ritual, a highly controversial and secret religious ceremony. Conservatives in Japan believe the Japanese Royal Family are descendants of the sun goddess and the Daijosai ritual involved Naruhito spending a symbolic night with the goddess.

Little information surrounding the Daijosai ritual and what occurs behind closed doors during the ritual is available in the public domain, but critics have claimed that the ritual involves the emperor having conjugal relations with the goddess. The ritual, conducted late into the night, before dawn breaks, has been a part of the enthronement ceremony of Japanese emperors for generations. 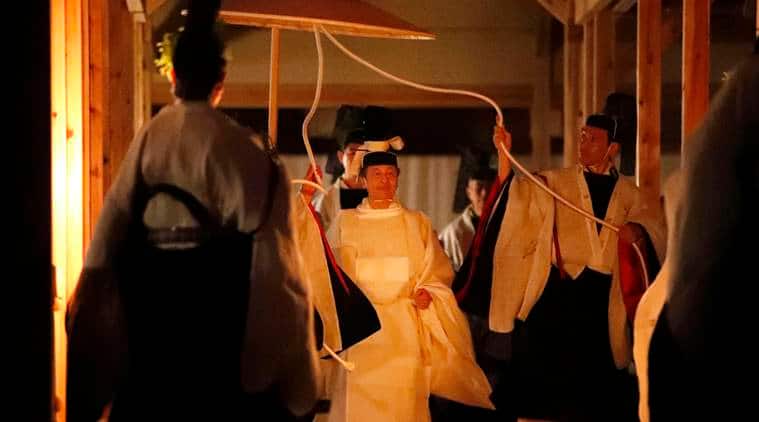 Japan’s Emperor Naruhito, center, walks toward Yukiden, one of two main halls of the shrine for Daijosai, or great thanksgiving festival, at the Imperial Palace in Tokyo Thursday, Nov. 14, 2019. (Kyodo News via AP)

Explained: What is Japan’s Daijosai ritual?

The Daijosai is a Shinto religious ritual in the Japanese enthronement ceremony of the Japanese emperor. According to Fabio Rambelli, Professor of Religious Studies & East Asian Cultures and the International Shinto Foundation Chair in Shinto Studies at the University of California Santa Barbara, the ritual is perhaps the “most symbolically important, ceremony in the enthronement of a Japanese emperor”. “The Daijosai is a highly contested topic, with a very long history,” says Rambelli in an interview with indianexpress.com.

The enthronement ceremony of the Japanese emperor occurs in three stages. In the first stage, the new emperor receives the three imperial regalia — a replica of an ancient sword, the original of which lies in a Shinto shrine in the city of Nagoya; an archaic jewel, and a mirror, which, according to Rambelli, is considered the physical support of the Shinto supreme goddess Amaterasu, the divine ancestor of the Japanese imperial family. This mirror is preserved at the Grand Shrine of Ise in central Japan. In the second stage of the enthronement ceremony, the emperor announces his ascent to the throne.

The last stage occurs in November, when the new emperor performs the Daijosai, says Rambelli. The ceremony is also a thanksgiving ritual and according to Rambelli is translated as Great Thanksgiving Ceremony, the literal translation being “great tasting ceremony”. During the ceremony, the new emperor offers specially selected first fruits that are grown in special fields and subjected to numerous rules of purity, collected from the new harvest in these fields located in eastern Japan and western Japan, to his divine ancestors (the sun goddess Amaterasu and others) and all the gods of heaven and earth to secure peace and prosperity for the country and its citizens, explains Rambelli. Japan’s Empress Masako attends ‘Daijosai’, the most overtly religious ceremony of the emperor’s accession rituals, at the Imperial Palace in Tokyo, Japan, November 14, 2019, in this photo released by Kyodo.

After making the offerings, the emperor also partakes of the food, where he is ideally expected to do so together with the deities. “It is a very old ritual, first mentioned in 712 and probably dating back even further. Daijosai is performed only once in each emperor’s reign. However, a smaller-scale version of it is performed every year, in November, as a harvest festival, called Niiname-sai, tasting of the new harvest,” says Rambelli.

“This is complicated. The Daijosai is a highly secret ritual, in which only the emperor, and perhaps a few female attendants, know what happens. It is performed according to ritual procedures established in the 17th century, in turn based on much older older documents, ultimately dating back to the seventh century or earlier,” explains Rambelli.

Ancient Shinto texts only describe ritual procedures but not their meaning, and according to some academics is also a reason why the Daijosai ritual is so controversial. Sensationalised headlines surrounding the ritual were published days before and after the ceremony claiming the Emperor was “spending the night” with a goddess, but there is little known about what actually occurs during the ritual.

“We know that the emperor is supposed to spend the night alone in a special chamber with a special “sleeping place”, shinza, in it, but the ritual texts from centuries ago, at least, those that are available, do not say what it is for,” says Rambelli. “The idea that the emperor was sleeping with a goddess—in fact, not any goddess, but his divine ancestor Amaterasu, was circulated in the late 1920s-early 1930s by Shinto scholars and Shinto priests in an attempt to explain the ritual in the context of the emperor’s divinity as it was promoted by the Japanese government at the time.” Japan’s Emperor Naruhito, second from right, walks toward Yukiden, one of two main halls of the shrine for Daijosai, or great thanksgiving festival, at the Imperial Palace in Tokyo Thursday, Nov. 14, 2019. (Kyodo News via AP)

According to Rambelli, this line of thinking was more elaborately discussed by Shinto scholar Orikuchi Shinobu and “became incredibly influential”. Rambelli emphasises that several Shinto texts concerning religious rituals do not describe the meaning of the rituals, thus leaving it open for priests, scholars and politicians to attribute meaning and context that they find suitable and appropriate. “We should emphasise, however, that it has no clear historical or doctrinal ground,” says Rameblli.

The controversial nature of this ritual and the criticism that it has evoked as a consequence has prompted the Imperial Household Agency, the branch of the Japanese government that deals with the emperor and imperial matters, to downplay several aspects of the ceremony. The criticism and controversy surrounding the ritual is not new and according to Rambelli, the agency has also tried to downplay “the divine implications of the Daijosai since its performance by the previous emperor, Akihito, in 1990”.

Prior to the enthronement ceremony of Naruhito, the Japan government issued a statement only stating that the Daijosai originates in an ancient harvest festival and the emperor offers food to the gods and partakes in it to pray for peace and prosperity of his country and people. The use of public funds for the Daijosai ritual has also received criticism from several fronts in Japan.

Some critics claim Daijosai and other enthronement rituals violate women’s rights. Is this accurate?

Given the lack of information about what occurs behind closed doors during the Daijosai ritual in particular, it is difficult to state whether it violates any women’s rights. In the enthronement ceremony, women don’t play a significant role at all. The most they can do is to contribute in the role of assistant priestess. Some scholars have stated that there is disdain for women’s rights in Japanese religious tradition and that the Daijosai ritual is a reflection of that.

However, according to Rambelli, all major religious traditions show disdain for women. “Traditionally, different religious traditions in Japan—Shinto, Buddhism, Confucianism—did emphasise women’s inferiority to men, even though that was not always the case. Some authors did stress the fundamental equality, or even superiority, of women, and when they did so, they did it for different reasons.”

Less well-known today, according to Rambelli, is the fact that women have equal rights in many Buddhist organisations and Shinto shrines. “Specifically, women can become Buddhist priests, not nuns, with the same prerogatives and duties as male priests, and they can also become Shinto priests and even head priests of Shinto shrines,” explains Rambelli.

Despite the perception, few Shinto shrines in Japan have traditionally kept some sacred spaces off-limits to women, says Rambelli. Sayako Kuroda, formerly known as Princess Nori, the only daughter of former Emperor Akihito and sister to present Emperor Naruhito, is an imperial Shinto priestess of the Ise Grand Shrine, currently serving as the Supreme Priestess. According to Imperial laws in Japan, upon her marriage in 2005 to Yoshiki Kuroda, a commoner, the princess had to give up her Imperial title of princess and had to leave the Japanese Imperial Family.

“Overall, I think that Japanese religions today no longer show discrimination towards women, as based on ancient texts.”. 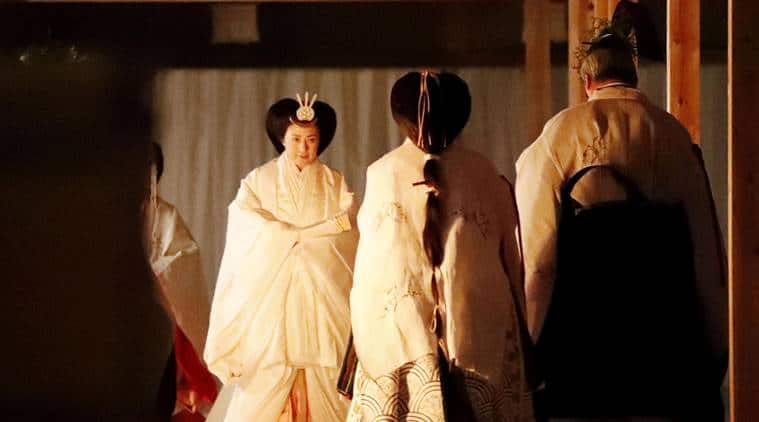 Japan’s Empress Masako walks to Yukiden to attend ‘Daijosai’, the most overtly religious ceremony of the Emperor Naruhito’s accession rituals, at the Imperial Palace in Tokyo, Japan, November 14, 2019, in this photo released by Kyodo.  (Kyodo/via REUTERS)

Why is the Japanese Emperor considered divine?

According to Kazuo Kawai, who has conducted extensive research on the divinity of the Japanese emperor over the reigns, the belief of the emperor as being divine has been a historical tradition, where it is believed that the emperor is descended from the sun goddess and the belief that all Japanese people are descended from the same line. This belief plays into the constructs of patriarchy in Japan where the belief is that the Japanese belong to one big patriarchal family, with the emperor at its head, as the “father” and the subjects as his “children”. In his paper titled ‘The Divinity of the Japanese Emperor’, Kawai says this myth embodies “concepts such as a divine ruler, a chosen people, and a hierarchical relationship between ruler and ruled fixed by indissoluble hereditary ties.”

The Meiji Constitution of 1889 states that the “Emperor is sacred and inviolable”. However, after the Second World War, the scenario changed for the Emperor of Japan and the Imperial Family at large. Although the Japanese Imperial Family is still deeply respected and holds significance for Japan and its people, the War and Japan’s losses changed the situation.

Under pressure from the Allied Powers, on January 1, 1946, Emperor Hirohito was forced to formally renounce his divinity. Changes brought on by the Allied Powers were also reflected in the Constitution of 1947, also known as the MacArthur Constitution after American military general Douglas MacArthur, declared the Emperor to be a mere figurehead, a “symbol of the State…deriving his position from the will of the people in whom resides sovereign power.” This constitutional change stripped the Emperor of even nominal powers and assumed the position of the head of state without much involvement in the running of the government. The late Emperor Hirohito of Japan, seen in this April 12, 1986 file photo. Emperor Hirohito, in whose name Japanese soldiers fought in World War Two, was reluctant to start a war with China in 1937 and had believed in stopping it earlier, media reported on Friday, citing a diary by his former chamberlain. (Reuters)

Rambelli, a long-time researcher on Japan who has lived in the country for close to two decades, says: “I have met very, very few Japanese for whom the emperor is a divine figure. Many may say that the emperor plays an important symbolic and affective role, pretty much what Europeans living in monarchic countries would say. The divinity of the emperor is stressed today only by some Shinto priests and a few right-wing fanatics, and these two groups are not necessarily the same; it is not the official position of any religious institutions or government agency.”