What is anti-Semitism and why is it finding a new voice across the globe?

With the rise of the right in Europe, the escalation of ethnic tensions in the Middle East, and the increasing anonymity provided by social media platforms, anti-Semitism is once again a pressing matter of concern. 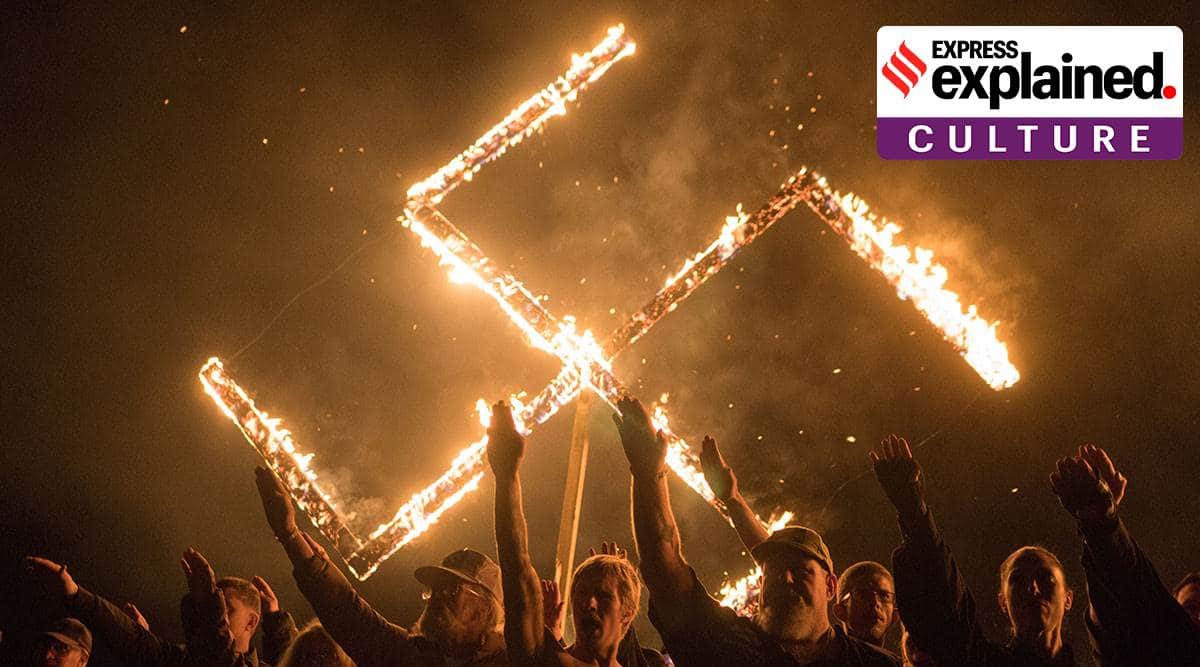 Racial anti-Semitism, most commonly associated with the Nazis, stems from a belief that Jews are a distinct, inferior race with inherent genetic traits. (Source: ushmm.org)

Clothing giant Adidas recently announced that it would be cutting all ties with Kanye West, now known as Ye, following a series of concerning comments made by the rapper. Over the last few years, Ye’s behaviour has become increasingly erratic, causing him to lose lucrative partnerships with brands like Balenciaga and Gap. However, for Adidas, the breaking point was a series of tweets by Ye that were widely deemed to be anti-Semitic.

Although there has been much backlash in response to Ye’s comments, many point out that he is not the only public figure to seemingly hold a prejudice against Jews. While anti-Semitism has existed for centuries, following the Holocaust many governments enacted laws limiting the practice in public forums. Now, with the rise of the right in Europe, the escalation of ethnic tensions in the Middle East, and the increasing anonymity provided by social media platforms, anti-Semitism is once again a pressing matter of concern.

Plainly, anti-Semitism refers to any form of prejudice against the Jewish people. However, the term itself is a misnomer as Semitic designates a language group, not a race. Though anti-Semitism can linguistically be used to describe a prejudice against speakers of the Semitic languages (including Arabs and Ethiopians,) in practical terms, it is commonly used specifically to pertain to Jews.

According to the International Holocaust Remembrance Alliance, an intergovernmental organisation formed in 1998, the following should be used as a working definition of anti-Semitism:

“Antisemitism is a certain perception of Jews, which may be expressed as hatred toward Jews. Rhetorical and physical manifestations of antisemitism are directed toward Jewish or non-Jewish individuals and/or their property, toward Jewish community institutions and religious facilities.”

Michael Berenbaum, a professor and Rabbi who is the former project director of the US Holocaust Memorial Museum, expands upon that definition, citing five distinct categories of anti-Semitism, namely, racial, religious, social, economic and political.

Racial anti-Semitism, most commonly associated with the Nazis, stems from a belief that Jews are a distinct, inferior race with inherent genetic traits. This form usually manifests in the belief that Jews need to be exterminated altogether.

Religious anti-Semitism traces its roots to the early days of Christianity and is accompanied by a notion that Jews should be converted to other faiths.

Social anti-Semitism is a form of exclusion of Jews from social situations. An example of the practice was reported in an article in The New York Times from 1959 that claimed that Jews in America were routinely excluded from golf and sports clubs.

Also Read |‘The idea of me wearing it was funny’: Kanye West defends his ‘White Lives Matter’ t-shirt

Economic anti-Semitism, the most prevalent amongst the biases, posits that Jews have a disproportionate degree of control over global and national financial institutions, and that their stronghold over those institutions ought to be diminished.

Lastly, political anti-Semitism is the attempt to keep Jews out of power. It is often conflated with anti-Zionism, a movement that denies the Jewish right to a national homeland. As the Jewish Virtual Library notes, often anti-Semitism is masked behind a façade of criticism towards Israel. However, it is also important to differentiate legitimate criticism of the actions of the Israeli state from accusations of prejudice against Jews. 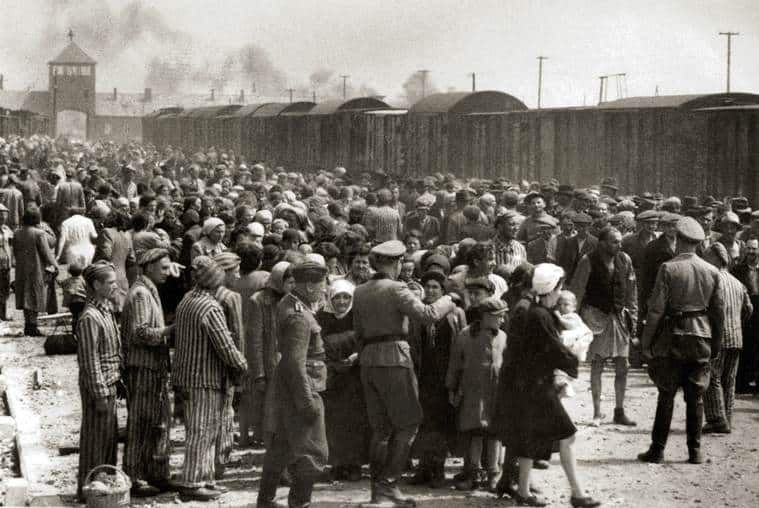 Jews at a Auschwitz came in German-occupied Poland, around May 1944. Jews were sent here either to work or to the gas chamber. The photograph is part of the collection known as the Auschwitz Album. (Source: Auschwitz Album, Yad Vashem)

Modern anti-Semitism exists within the context of a historical prejudice against Jews by Christians. According to Christian doctrine, Jews were responsible for the death of Jesus, and thus deserved to be punished. Adding to that belief was a fear that early Christian converts would continue to abide by Jewish practices, conflating the two faiths over time.

According to some historians, the Adversus Judaeos (arguments against the Jews) tradition was established in 140 AD when the Christian apologist Justin Martyr engaged in a debate with Trypho the Jew. As per his own report of the conversation, he told Trypho, “you ought to understand that (the gifts of God’s favour) formerly amongst your nation have been transferred to us.”

This argument was wildly popular amongst Catholic leaders at the time and continued to hold relevance for centuries to follow. As the American historian David Nirenberg explains, “anti-Judaism was a tool that could usefully be deployed to almost any problem, a weapon that could be deployed on almost every front.”

From the Protestant reformer Martin Luther in 1543 to the French philosopher Edmund Burke in 1790, social and political leaders have positioned Jews as scapegoats for several societal ills. Throughout early, middle and late history, Jews have systematically been driven out of countries including England, Yemen, Brazil, Portugal, Spain, Hungary, and Egypt.

During the 1870s, this political and religious anti-Semitism was compounded by racial anti-Semitism, largely due to the works of Charles Darwin. Interpreting Darwin’s theory of evolution to mean that race was inherent and unchangeable, anti-Semites argued that Jews were genetically inferior on an evolutionary scale. This argument was also used to justify discrimination against colonial subjects and blacks in America.

Other examples of anti-Semitism from that period include the 1890 Dreyfus Affair in France in which a Jewish army officer was falsely accused of treason, igniting a fierce debate about the loyalties of Jews to their home countries. Additionally, between 1880 and 1910, 2.5 million Jews fled from Russia to the US after anti-Semitism became the official government policy under the rule of the Czars. This exodus was not without precedent – until 1772, Jews were banned from living in the Russian Empire altogether.

Advertisement
Explained |What is the future of Twitter under Elon Musk?

Controversially, there is also a theory known as positive anti-Semitism, which claims that in certain instances, Jews benefitted from the prejudices associated with them. In an article for the Israel Journal of Foreign Affairs, authors Yehuda Bauer, a historian, and Moshe Fox, a former Israeli diplomat, explain how this theory could be applied. They argue that the belief that Jews are influential or wealthy can result in “positive anti-Semitism,” because people then misconstrue their prominence in world affairs.

The Balfour Declaration, the British Government’s 1917 statement of support for the creation of a Jewish state, is one example of the phenomenon. The Declaration, Fox and Bauer write, “was at least partly rooted in the antisemitic view that Jews were a powerful group, the ‘positive’ conclusion being that they were worth luring to the British side.”

However, while there may be some basis to that theory, there can be no doubt that the negative aspects of anti-Semitism far outweigh the positive. For many, the most famous historical stain to that effect is represented by the Holocaust. The notion of Jewish inferiority in Germany that led to the Holocaust can be traced back to the Völkisch movement in the late 19th century. Völkisch nationalists believed that the German race, defined very narrowly in this regard, held a natural supremacy over all other races. They considered Jews to be an alien people, who belonged to a different Volk (or race) from the Germans, and who were to be blamed for undermining the German way of life.

By the early 1900s, several anti-Semitic parties sprung up in Germany, bolstered further by Germany’s loss in World War One. That in turn catalysed the rise of the Nazi party and culminated in the death of over 6 million Jews by the end of the Second World War.

After witnessing the magnitude of this genocide, world leaders committed to tackling the problem of anti-Semitism, their efforts immortalised by the sombre vow, “Never Again.” Anti-Semitic thought was so greatly weakened by the Nazis that even the Catholic Pope deemed the practice to be a sin. Governments began enacting laws protecting the rights of Jews, and memorials and museums emerged across the world, documenting the horrors of the Holocaust.

However, as time goes by, and survivors of the War slowly give way to a new generation, the dangers of anti-Semitism are becoming less apparent. As Jeffery Goldberg, the editor of the Atlantic Magazine, points out, what we are seeing today is an ancient and deeply embedded hostility towards the Jews as the events of the Second World War recede from our collective memory.

From far-right demonstrators in the US, attacks on synagogues in Sweden, arson attacks on kosher restaurants in France and an increase in crimes against Jews in the UK, globally, anti-Semitism is exploding once again.

According to the Anti-Defamation League (ADL), an annual audit of anti-Semitic incidents in the US showed a 34 per cent increase from 2020 to 2021. In Germany, the number of violent antisemitic attacks surged by more than 60 per cent in 2018 from the year before, while anti-Semitic acts in France that year increased by more than 70 per cent. Reports from Australia and Canada reflect a similar trend.

In Eastern Europe, right-wing parties have taken control, rewriting Holocaust history and adopting Nazi slogans and agendas. In Western Europe, anti-Semitism is prevalent amongst political parties on the left and within Muslim communities.

Worryingly, the problem seems to be exacerbated by social media. In a journal article titled, A Quantitative Approach to Understanding Online Anti-Semitism, a collection of authors searched through hundreds of millions of comments on popular sites like 4Chan and Gab for mentions of Jews. They found that “racial and ethnic slurs are increasing on fringe web communities,” normalising anti-Semitic language and potentially fuelling attacks against Jewish communities.

Explained Books |Rise of the right around the world: the lessons that history offers

Surveys by the ADL also supports the notion that anti-Semitic sentiments are on the rise. In a survey of 53,000 people across 101 countries, they found that 26 per cent of them harboured anti-Semitic attitudes. While 49 per cent of Muslims expressed such beliefs, concerningly, so too did 24 per cent of Christians and 19 per cent Hindus. Overall, only 54 per cent of respondents were aware of the Holocaust, with that figure dropping to 24 per cent in Sub-Saharan Africa and 38 per cent in the Middle East and North Africa (MENA.)

In the MENA region in particular, 74 per cent of respondents surveyed held anti-Semitic views. In Asia that number drops to 22 per cent, in Western Europe, 24 per cent, in Eastern Europe, 34 per cent, and in the Americas, 19 per cent. Asked why people felt this way, the majority of respondents (75 per cent) said they hated Jews because of the way they behaved while 74 per cent said that they thought Jews were more loyal to Israel than their home countries.

Among people familiar with all the religions tested in the survey, more are unfavourable towards Jews than towards people of any other religion.