During the third wave, the positivity rate is being considered a much better indicator of the spread of the disease than the daily case count. 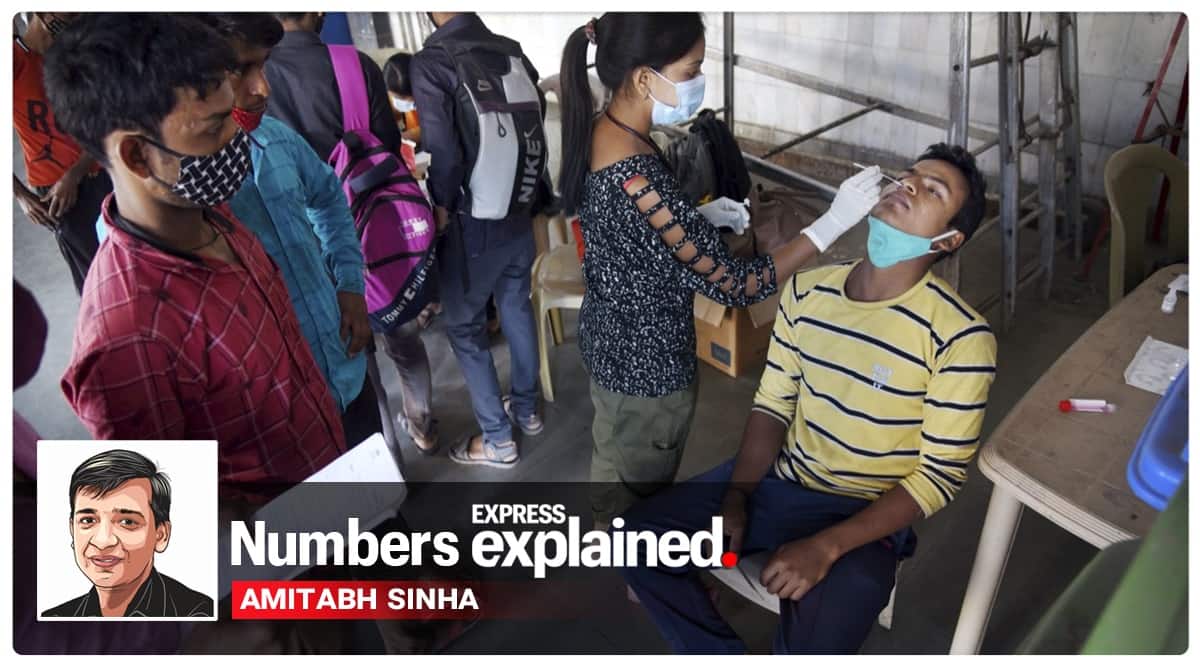 A medic from NMMC Health Department collects swab sample of a man for Covid-19 test, at Nerul railway station in Navi Mumbai on Saturday. (PTI)

After 10 days of almost steady decline in the detection of new coronavirus cases, the positivity rate has begun to fall too, indicating that the third wave in India could really have begun its downward journey.

This is the first time in more than a month that the weekly positivity rate has gone down.

During the third wave, the positivity rate is being considered a much better indicator of the spread of the disease than the daily case count. This is because a vast majority of the cases remain undetected, and lots of people, even with symptoms, are not getting themselves tested because of the mild nature of the disease caused by Omicron variant and relatively quicker recovery time. In addition, a significant proportion of people have been using home-testing kits whose results often do not get included in the official case counts.

The weekly positivity rate in India had fallen below half a percent in the third week of December before it began to rise amidst an increasing number of infections caused by the Omicron variant. It had risen continuously after that, till this Friday, when a dip was observed for the first time.

A positivity rate of more than 15 per cent, however, is still very high. If the entire duration of the pandemic in India is considered, taking into account all the positive cases detected so far and the number of tests conducted, the positivity rate is lower than six per cent. For a brief period during the second wave, however, the weekly positivity rate had risen as high as 22 per cent.

Kerala has been reporting more than 50,000 new cases for the last five days now, its contribution to the national case count now exceeding 20 per cent. Amongst the major states, it is the only one which is not yet showing any signs of decline in the daily case numbers. Andhra Pradesh has also not going down, but there the case count is around 12,000. Karnataka and Tamil Nadu, two other states reporting over 25,000 cases every day, seem to have reached their peaks in the third wave and are on their downward journey now.