How pollution, insects are threatening Taj Mahal, and what Supreme Court has said

The apex court has repeatedly called attention to the failures in protecting the Taj Mahal, even saying that the government could 'demolish it if you like'. 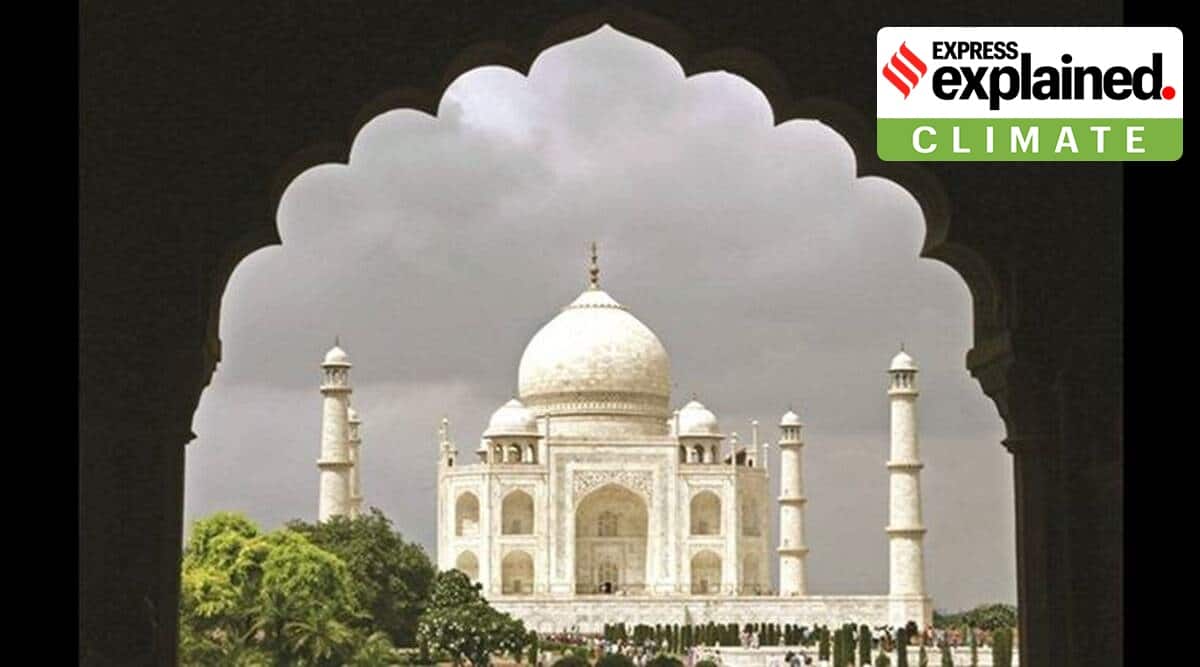 Earlier in 2018, the court had expressed concern over the changing colour of Taj Mahal’s marble — from white, to yellowish, to brownish-green. (File)

The Supreme Court on Monday (September 26) directed the Agra Development Authority to stop all commercial activities within a 500-metre radius of the Taj Mahal, a UNESCO World Heritage Site.

Advocate MC Dhingra, representing the applicants — a group of shopkeepers allotted space outside the 500 metre radius — stated that illegal businesses were thriving near the western gate of the monument, which is a gross violation of previous orders issued by the court. He asked the court to issue orders to curb all such activities and direct authorities to make sure the directions are followed.

The apex court has repeatedly called attention to the failures in protecting the Taj Mahal from various forms of pollution. In 2018, it had reprimanded the Centre and the UP government for its “apathy” and stated that the preserving of the Mughal-era structure was a “hopeless cause.”

Since the 1970s, there have been growing concerns that emissions from industries near the Taj Mahal are causing its once-gleaming white marble surface to discolour, turning it yellow and black in some places. In order to protect the monument from pollution, the central government had demarcated an area of 10,400 sq km around the Taj, called the Taj Trapezium Zone (TTZ).

Advocate and environmentalist M C Mehta had filed a petition before the Supreme Court in 1984, claiming that industries, foundries, vehicles and the nearby Mathura petroleum refinery were releasing toxic gases like sulphur dioxide, which were harmful to both the monument and the people in its vicinity. He therefore asked the court to take immediate measures to stop air pollution within the TTZ to protect the Taj Mahal.

In 1996, the top court in a landmark judgement (M.C. Mehta vs Union Of India & Ors), stated that “the atmospheric pollution in TTZ has to be eliminated at any cost.” It found that the nearby coke/coal consuming industries were damaging the monument and the people living in the TTZ. It also directed the 292 industries operating in the zone to switch to natural gas as industrial-fuel, or relocate from their area.

In 2010, a report submitted by the National Environmental Engineering Research Institute (NEERI) found that despite various government schemes to reduce pollution in the TTZ area, the iconic Taj Mahal continued to face a threat from water and air pollution.

Although, between 1998 and 2000, the government had launched projects costing more than Rs 200 crore, the survey found that pollution levels in Agra continued to grow. While the creation of a bypass, improvements to the power supply and reduction of diesel generators had a positive impact, the study found that emissions of nitrogen oxide and particulates had reached higher levels than a decade prior, The Guardian reported in 2010. Furthermore, the NEERI report found that the Yamuna water, contaminated with industrial discharge, sewage and solid waste, was also damaging the monument as well.

Scathing criticisms by the Supreme Court

In July 2018, the top court condemned the “lethargy” shown by authorities in protecting the Taj Mahal. The bench, composed of Justices Madan B Lokur and Deepak Gupta, told the Ministry of Environment and Forests (MoEF) in court: “Uttar Pradesh (government) is not bothered. No action plan or vision document has come yet. Either you demolish it (Taj) or you restore it.”

The court had been hearing another plea, filed by Mehta more than three decades after his first petition on the Taj Mahal in 1984, seeking the monument’s protection from pollution once again.

The Supreme Court had criticised the UP government for not producing a vision document that would outline the steps it would take to protect the monument, despite asking that it do so in December 2017. It had also questioned how the TTZ authorities were considering proposals by several industrialists to expand their units in the demarcated area, despite an “ad hoc Moratorium” imposed by the court.

Earlier in 2018, the court had expressed concern over the changing colour of the Taj Mahal’s marble — from white, to yellowish, to brownish-green. Blaming the Archeological Survey of India (ASI) for its inability to protect the monument, the Supreme Court said that the ASI “will have to be thrown out of the picture” if the Taj Mahal was to be saved.

Apart from harmful emissions from industries and vehicles, the Taj Mahal has also become discoloured due to contamination of the Yamuna, which has resulted in a loss of aquatic life, leading to insect and algae infestation of monuments situated on the river-bank.

In an interview given to The Indian Express in 2018, Mehta had said that insects breed in the polluted matter in the river, and then attack the Taj Mahal in the evening.

“Earlier, there were fish in the river, which ate the insects and their larvae, but now, due to the serious water pollution, there is no sign of any aquatic species in the river,” he had said.

Referencing the ASI’s, ‘A Report on Insect Activities at Taj Mahal And Other Monuments of Agra’, Mehta had stated that green and black patches had developed on the marble facade due to the presence of a specific type of insects, mainly on the northern side of the Taj Mahal.

One of the last brooches worn by Queen Elizabeth II goes on display; know more about it