The violence in the murder of Najibullah and his brother shocked the world, and was condemned as un-Islamic by even Saudi Arabia, a friend of the Taliban. 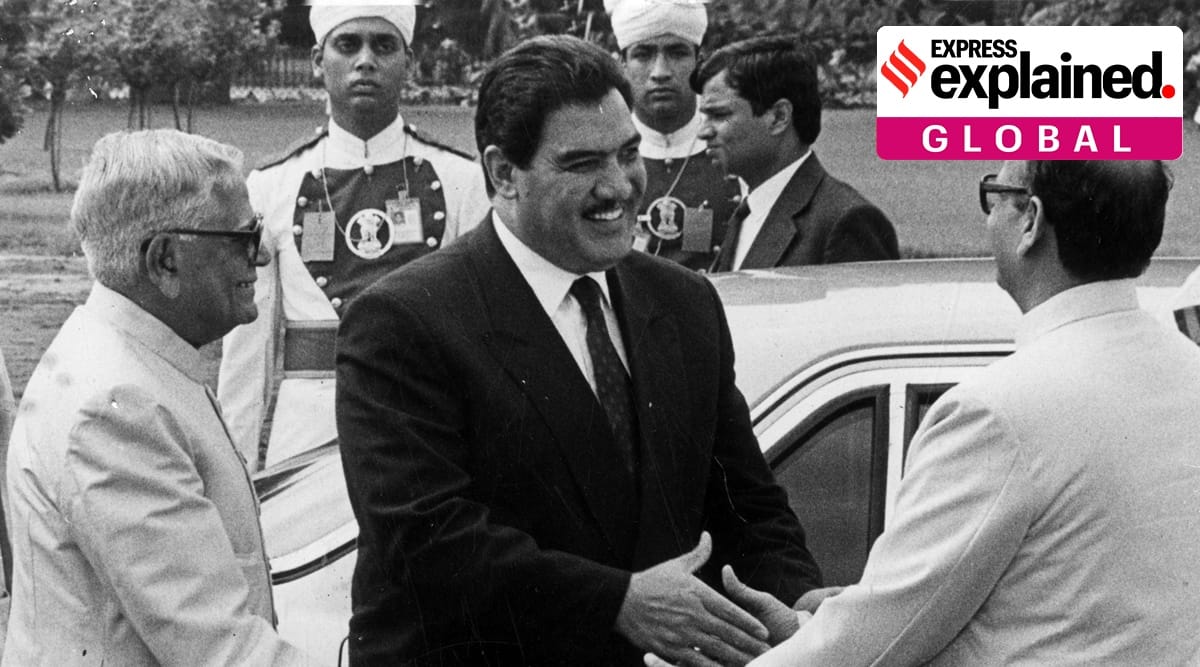 Kabul, the ultimate prize in every Afghanistan war, fell to the Taliban Sunday, completing their takeover of the country in a lightning offensive that saw provinces and warlords give up without a fight, days after the hasty withdrawal of US troops.

Hours after Pakistan-backed Taliban fighters showed up on the outskirts of Kabul and their chiefs demanded transfer of power to avoid violence, President Ashraf Ghani fled the country to an undisclosed location, and wrote on his Facebook page: “To avoid bloodshed, I thought it would be better to leave”.

In 1992, when the mujahideen closed in on Kabul the last time, another Afghan President had tried to flee the country, but tragically failed, unlike Ghani. That leader was Mohammed Najibullah, Afghanistan’s USSR-backed ruler since 1987, who was intending to escape to friendly India.

Who was Mohammed Najibullah?

A Pashtun who began his political career while he was a medical student in Kabul University, Najibullah started out as a member of the communist People’s Democratic Party of Afghanistan. The PDPA seized power in the 1978 Saur revolution, but it was only with the Soviet invasion of Afghanistan in 1979 that Najibullah’s rise began.

He was first the security boss of Afghanistan as the head of KHAD, the Afghan secret service that was for all purposes run by the KGB. Over the course of the next 14 years, Najibullah would travel the political spectrum from Marxist to Afghan nationalist.

From 1987, when Moscow installed him as President, Najibullah initiated steps for a return to peace, known as the National Reconciliation Policy (NRP). Glasnost was sweeping through the Soviet Union, and the Red Army’s continued presence in Afghanistan looked untenable. Najibullah realised it would not be long before he would be on his own.

Under the NRP, Najib reverted to the country’s old pre-communist name of Republic of Afghanistan (from 1978 to 1987 it was known as the Democratic Republic of Afghanistan), Islam was declared the state religion, and the PDPA itself became the Hezb-e-Watan Party, in a bid to appeal to the Islamist mujahideen victors of the war.

But his efforts were in vain.

How did Najibullah’s plan to escape fail?

As the mujahideen began taking over Kabul in 1992, Najibullah resigned. India tried to evacuate him from Afghanistan that April in an operation that went wrong badly. The car in which he was being taken to the airport (by some accounts, the Indian ambassador’s car) was stopped outside the airport gates by guards owing allegiance to Abdul Rashid Dostum, a warlord who had been bankrolled by Najibullah, but who had switched sides when the payments stopped, after the Afghan government’s tap went dry following the break-up of the Soviet Union in 1991.

Najibullah’s family escaped to India months before he was deposed in 1992, and has lived in Delhi ever since.

Also Read |‘Religious persecution and social exclusion are strong motivators… there is only so much a community can tolerate’: Najibullah's daughter

The plane that was to fly Najibullah to Delhi was waiting on the runway, with the United Nations envoy to Kabul sitting inside. Najibullah had a heated argument with the guards, but failed to get them to let him pass. Nor could he go back to the President’s palace. So the car took him to the UN compound where he would live for the next four-and-a-half years in self-imprisonment.

The Taliban took over Afghanistan from the warring factions of the mujahideen after a four-year long civil war. In 1996, they captured Kabul from the retreating forces of Ahmad Shah Massoud, the ethnic Tajik leader of the anti-Taliban Northern Alliance. Najibullah, his brother and two other companions, sheltered in the UN compound, were left to fend for themselves.

Also Read |The shift in India position on Taliban: from rejection to unofficial talks

Massoud did offer to give Najibullah safe passage to the north, but he turned down the offer, as he was still counting on his Pashtun ethnicity to make a deal with the Taliban, which he believed would be more complicated if he escaped with a Tajik to the north.

With no UN officials left in the compound, a small team of the Taliban, including, according to some accounts, an ISI officer in disguise, stormed in. Najibullah and his brother were beaten, dragged behind a jeep, castrated, shot, and then strung up from a traffic light pole outside the Presidential palace.

It was a chilling message to the people of Kabul and Afghanistan. The violence shocked the world, and was condemned as un-Islamic by even Saudi Arabia, a friend of the Taliban.