Supreme Court flags ‘sealed cover’ again, says it is vague, opaque. What is this practice frequently seen in courts?

CJI Chandrachud has criticised sealed covers earlier too — as has former CJI N V Ramana. However, it is also the Supreme Court itself that has given legitimacy to the practice. 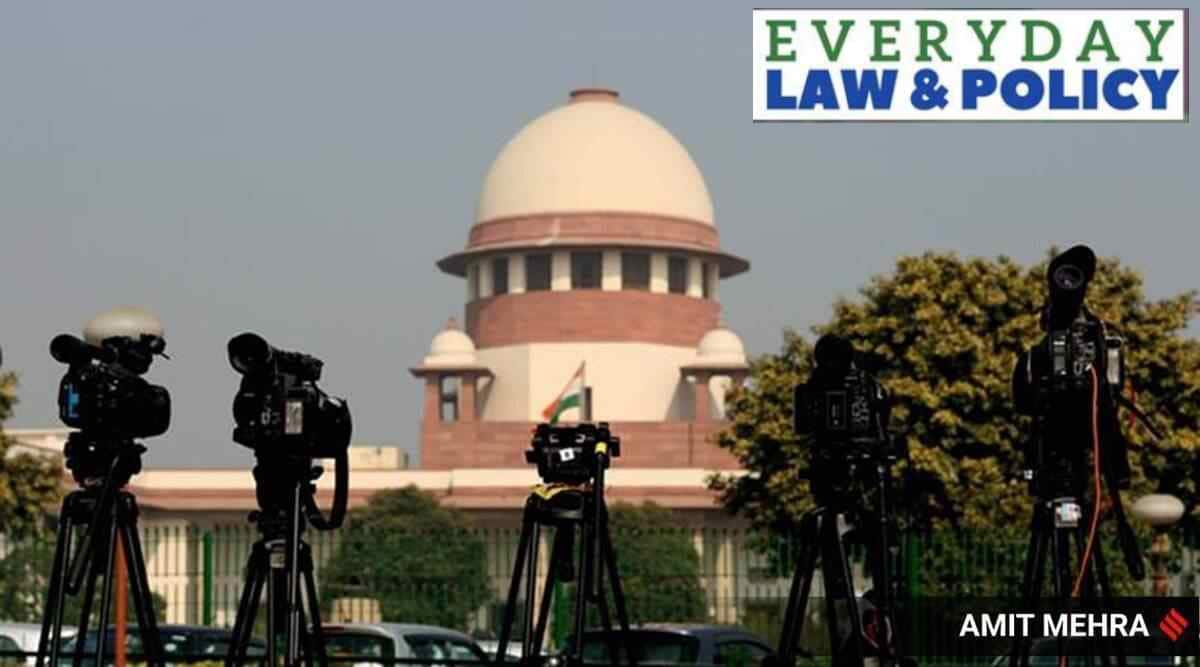 A Bench led by (now) Chief Justice of India D Y Chandrachud last month criticised the practice of “sealed cover” jurisprudence as setting a “dangerous precedent”, which makes “the process of adjudication vague and opaque”. CJI Chandrachud has criticised sealed covers earlier too — as has former CJI N V Ramana. However, it is also the Supreme Court itself that has given legitimacy to the practice.

What does the expression “sealed cover jurisprudence” mean?

It is the controversial practice followed by the Supreme Court (and sometimes lower courts as well) of seeking and accepting information from government agencies in sealed envelopes that can only be perused by the judges.

Rule 7 of Order XIII (“Copying”) of the Supreme Court Rules, 2013 (notified in May 2014), says: “Notwithstanding anything contained in this order, no party or person shall be entitled as of right to receive copies of or extracts from any minutes, letter or document of any confidential nature or any paper sent, filed or produced, which the Chief Justice or the Court directs to keep in sealed cover or considers to be of confidential nature or the publication of which is considered to be not in the interest of the public, except under and in accordance with an order specially made by the Chief Justice or by the Court.”

When can the court ask for information in a sealed cover?

So what is the problem with this procedure?

Essentially that (i) it prevents parties from having a full overview of the charges against them, and (ii) it is not compatible with the idea of an open court and a transparent system of justice. Courts are bound to set out reasons for their decisions, and legal experts argue that not disclosing them leaves scope for arbitrariness in judicial decisions. It also takes away the opportunity to analyse judicial decisions, and to appreciate the rationale behind them.

In its order issued in ‘Cdr Amit Kumar Sharma v Union of India’ on October 20, 2022, the Supreme Court Bench of Justices Chandrachud and Hima Kohli said “the non-disclosure of relevant material to the affected party and its disclosure in a sealed-cover to the adjudicating authority…sets a dangerous precedent. The disclosure of relevant material to the adjudicating authority in a sealed cover makes the process of adjudication vague and opaque”.

“Firstly, it denies the aggrieved party their legal right to effectively challenge an order since the adjudication of issues has proceeded on the basis of unshared material provided in a sealed cover…

“Secondly, it perpetuates a culture of opaqueness and secrecy. It bestows absolute power in the hands of the adjudicating authority. It also tilts the balance of power in a litigation in favour of a dominant party which has control over information. Most often than not this is the state. A judicial order accompanied by reasons is the hallmark of the justice system… The sealed cover procedure affects the functioning of the justice delivery system both at an individual case- to case level and at an institutional level.”

Does this mean all information must be disclosed to everyone?

No, it does not. The Supreme Court clarified that “this is not to say that all information must be disclosed in the public”, giving the example of “sensitive information affecting the privacy of individuals such as the identity of a sexual harassment victim”. But it underlined that “the measure of nondisclosure of sensitive information in exceptional circumstances must be proportionate to the purpose that the non-disclosure seeks to serve”, and that “the exceptions should not…become the norm”.

Has the Supreme Court said something like this earlier too?

* In March this year, in a case involving the Bihar government, a three-judge Bench headed by then CJI Ramana made it clear that it wanted all arguments to be presented in open court. “Please don’t give us a sealed cover, we don’t want it here,” Ramana told the Patna High Court counsel.

* Later that same day, Justice Chandrachud, during the hearing on an appeal against the Centre’s ban on the Malayalam TV channel MediaOne, said, “We are averse to sealed cover jurisprudence. Do you have issues if we go through the record now?” The channel had gone off air on February 8 after the Kerala High Court upheld the ban by relying on documents submitted by the Centre in a sealed envelope. But the SC declined to allow the same practice, and subsequently stayed the ban.

* In December 2019, while granting bail to P Chidambaram in the INX media case, a Supreme Court Bench of Justices R Banumathi, A S Bopanna, and Hrishikesh Roy censured the Delhi High Court for relying on material submitted by the Enforcement Directorate (ED) in a sealed cover.

“It would be against the concept of fair trial if in every case the prosecution presents documents in sealed cover and the findings on the same are recorded as if the offence is committed and the same is treated as having a bearing for denial or grant of bail,” the SC said.

How did this practice gain ground, then?

The Supreme Court itself has encouraged the practice of seeking public-interest related information in sealed envelopes, most recently under former CJI and now Rajya Sabha member Justice Ranjan Gogoi.

* In the Rafale aircraft case, the court accepted the government’s argument that the matter pertained to the Official Secrets Act.

* While refusing to stay the arrest of activists held in the Bhima-Koregaon case, it relied on “evidence” submitted by the Maharashtra police in a sealed envelope.

* In the NRC exercise in Assam — which led to about 19 lakh citizens being excluded from the list — the apex court sought details from the NRC coordinator in a sealed cover with neither the government nor the affected parties being allowed to look at them.

* In the case involving corruption allegations against former CBI director Alok Varma, the court insisted that the Central Vigilance Commission submit its report in a sealed cover, ostensibly to maintain public confidence in the agency.

* In the 2G case, in which it had cancelled a large number of licences, the court had relied on sealed covers.

* During the hearing in the Chidambaram case, while trying to persuade the court to refer to information in the sealed cover, Solicitor General Tushar Mehta had referred to a case from 1997, involving P V Prabhakar Rao, the son of former Prim Minister P V Narasimha Rao.

Himachal Pradesh elections: In run-up to 2024, much is at stake in hill state