Explained: Why is the Black Sea crucial to Russia, and the loss of ‘Moskva’ a significant blow?

The sinking of the warship Moskva, the 600-foot, 12,500-tonne flagship of the Russian Black Sea Fleet — whether due to a Ukrainian missile strike or, as Russia claims, a fire on board — is a serious setback for Russia. 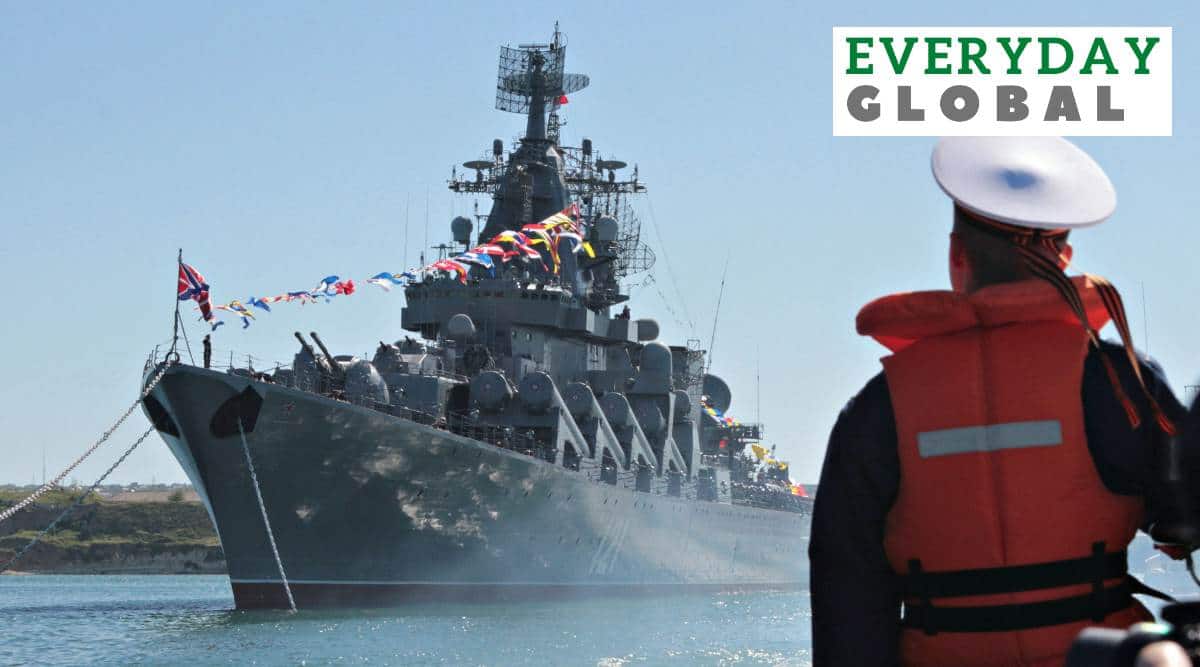 Russian news outlets have described the Moskva as one of the Russian Navy’s biggest ships. In pic: A sailor looks at the Russian missile cruiser Moskva moored in the Ukrainian Black Sea port of Sevastopol, Ukraine 10, 2013. (REUTERS/Stringer/File Photo)

The sinking of the warship Moskva, the 600-foot, 12,500-tonne flagship of the Russian Black Sea Fleet — whether due to a Ukrainian missile strike or, as Russia claims, a fire on board — is a serious setback for Russia.

The reversal is both military and symbolic, proof that its vessels can no longer operate with impunity, and a damaging blow to morale. On the other hand, it lifts Ukrainian hopes, demonstrating the defenders’ homegrown technological capacity, and exposing a weakness in the Russian navy’s anti-missile defences.

It also puts a question mark on Russian plans for an offensive on the city of Odessa through amphibious means.

Russia and the Black Sea

The famed water body bound by Ukraine to the north and northwest, Russia and Georgia to the east, Turkey to the south, and Bulgaria and Romania to the west, which links to the Sea of Marmara through the Bosphorus and then to the Aegean through the Dardanelles, has traditionally been Russia’s warm water gateway to Europe.

The Black Sea Fleet has a long history, and is considered to have been founded back in 1783. It comprises warships of the Russian Navy in the Black Sea, Sea of Azov, and the eastern Mediterranean, and is headquartered at Sevastopol, the major port on the Crimean peninsula.

Although Crimea became part of Ukraine after the USSR collapsed, the Russian Navy continued to have its base in Sevastopol as part of an agreement between the two countries. In 2014, Russia annexed Crimea.

In a paper titled ‘The Naval Power Shift in the Black Sea’ written for War on the Rocks, an online platform for analysis and debate on strategy, defence, and foreign affairs, Michael B Petersen, director of the Russia Maritime Studies Institute at the US Naval War College, said: “Moscow’s objectives in the region are not only merely limited to the Black Sea basin.

“While the Black Sea Fleet assists with the defence of southern maritime approaches to Russia, it also allows Moscow to use the Black Sea as a jumping off point into the eastern and central Mediterranean. From Moscow’s perspective, these activities enable its diplomacy and power projection into areas where Russia previously had limited influence, and they retard what Russia believes are US and NATO efforts to destablise its partners in places like Syria.” 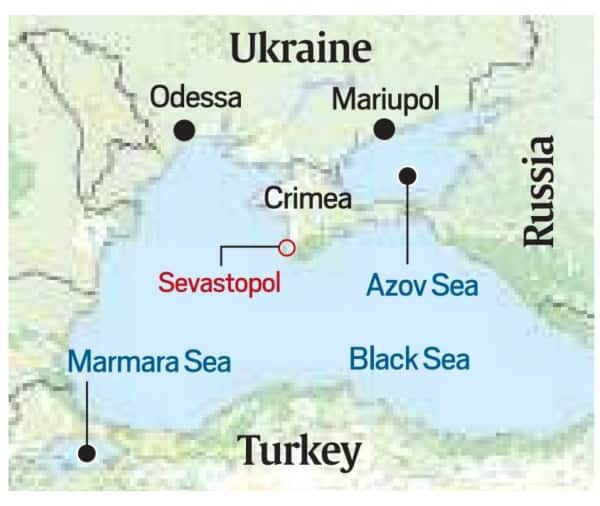 Black Sea in the Ukraine war

Russia has been making efforts to gain complete control over the Black Sea since the Crimean crisis of 2014.

During the ongoing invasion, the domination of the Black Sea has been a major Russian objective, along with the land bridge to connect Russia and Crimea. As such, there have been intense efforts to capture Mariupol, the Sea of Azov port in the breakaway eastern Ukrainian oblast of Donetsk. On Friday (April 15), Mariupol appeared close to falling to the Russians.

Gen Sir Richard Barrons, a former commander of the UK Joint Forces Command, has been quoted as saying that the capture of Mariupol will complete Russia’s land bridge to Crimea, give it control over more than 80 per cent of the Ukrainian Black Sea coastline, and cut off its maritime trade.

Russia was also expected to focus its military efforts on Odessa, to the west of Crimea. If the Odessa region were to fall as well, Ukraine would lose access to its entire Black Sea coastline and would in effect be reduced to a landlocked country. That would be a devastating blow to the Ukrainian economy.

The Odessa oblast has a muti-ethnic population wherein the Russians form the second largest group. It is also the largest region in Ukraine which serves as an important energy and transport corridor with abundant natural resources. The Rhine-Main-Danube canal connects the Black Sea to the Atlantic Ocean and the North Sea and the port of Odessa serves as a vital link between Ukraine and the outside world.

The loss of the Moskva is, however, expected to put brakes on an anticipated amphibious assault on Odessa. But the tempo of its attack on all points along the Black Sea which are still under Ukrainian control will likely increase. This may be through rocket forces, aerial bombardment, or offshore ships launching cruise missiles.

Sinking of the Moskva

Russian news outlets have described the Moskva as one of the Russian Navy’s biggest ships. It had been deployed by Moscow to the coast of Georgia during the 12-day war over South Ossetia and Abkhazia in August 2008, and to support Russian troops and equipment in Syria in 2015. After Russia invaded Ukraine in February, ships of the Black Sea Fleet, including the Moskva, fired a barrage of missiles into Ukraine, and blocked the country’s access to the Black Sea.

The sinking of the Moskva is believed to be the worst loss in the history of naval warfare since the sinking of the Argentine naval cruiser General Belgrano by a British submarine on May 2, 1982, during the Falklands War.

The fact that the Moskva was sunk by shore-based anti-ship cruise missiles which took advantage of bad weather and used decoy UAV attacks to defeat the ship’s air defence systems demonstrates the success of outside-the-box measures adopted by Ukraine in the war.

In its Intelligence Assessment Report on the incident, the UK Ministry of Defence has said: “This incident means Russia has now suffered damage to two key naval assets since invading Ukraine, the first being Russia’s Alligator class landing ship Saratov on March 24. Both events will likely lead to Russia to review its maritime posture in the Black Sea.”

‘Long Covid will haunt us…We have the right to demand higher performance from vaccines…Vaccines can do more if they are adequately boosted, revised’