Europe heatwave: What caused record temperatures, why it is a concern

Gallargues-le-Montueux in southern France hit an all-time high of 45.9°C during the last week. Places in Germany (39.3°C), Czech Republic (38.9°C) and Poland (38.2°C) experienced record highs for the month of June. 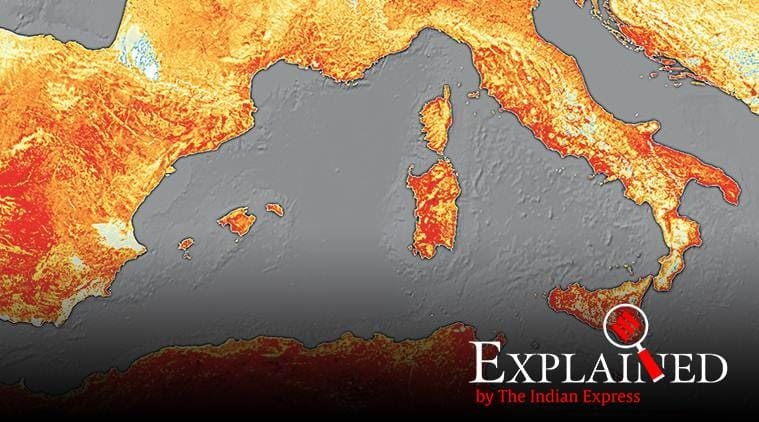 This map shows the temperature of the land (not of the air) in Europe and northern Africa on June 26. (Photo: European Space Agency)

Last week, Europe went through a heatwave that lasted six days, smashed temperature records, left two people dead in France and another two in Spain, and caused huge fires to break out, including one that spanned 10,000 acres in France. By Monday, temperatures had dipped in parts of the continent, leading to authorities calling off heatwave warnings, although certain areas such as the south of France continued to swelter.

Gallargues-le-Montueux in southern France hit an all-time high of 45.9°C during the last week. Places in Germany (39.3°C), Czech Republic (38.9°C) and Poland (38.2°C) experienced record highs for the month of June.

Why it is happening

The heatwave in Europe is a result of warm air masses from Africa, the World Meteorological Organization (WMO) said. The heatwave in Europe follows extreme heat episodes in India, Pakistan, parts of the Middle East and Australia. More events are expected to follow during this northern hemisphere summer, the WMO said.

While some scientists have blamed climate change for these trends, the WMO said it is too early for such an attribution. However, the WMO agreed that the heatwave is consistent with climate scenarios which predict more frequent, drawn out and intense heat events as greenhouse gas concentrations lead to a rise in global temperatures. Apart from heatwaves, various climate models have predicted alternating periods of prolonged droughts and heavy flooding in some areas.

What is a heatwave

Classifying a heatwave varies from country to country, because what is seen as extremely hot in one place may seem within normal range in another. In guidelines published in 2016, the WMO listed several factors to be considered while analysing an extreme weather event such as a heatwave. These include defining a specific threshold for variables such as temperature to be considered extreme, as well as a human perspective of extremes.

The heat poses a risk to people’s health, agriculture and the environment, the WMO said. It is the departure from normal — or what people are used to — that makes heatwaves dangerous. A reading of 35°C, which many people in India would be able to cope with, can make people severely ill in Germany. Babies and older people are particularly vulnerable because their bodies are not as well able to regulate their own temperatures as those of young adults. High temperatures can cause exhaustion, heat stroke, organ failure, and breathing problems.

In Europe, because people are not used to extremely high temperatures, many buildings don’t have air-conditioning. In Germany, only 2% of homes are air-conditioned, according to the news portal vox.com. Also, with 72% of the European Union’s population living in urban areas, a heatwave traps them in heat islands as steel, concrete, and asphalt structures absorb heat, Vox said.