President Donald Trump described the verdict as a “tremendous victory for the American people and the Constitution”. 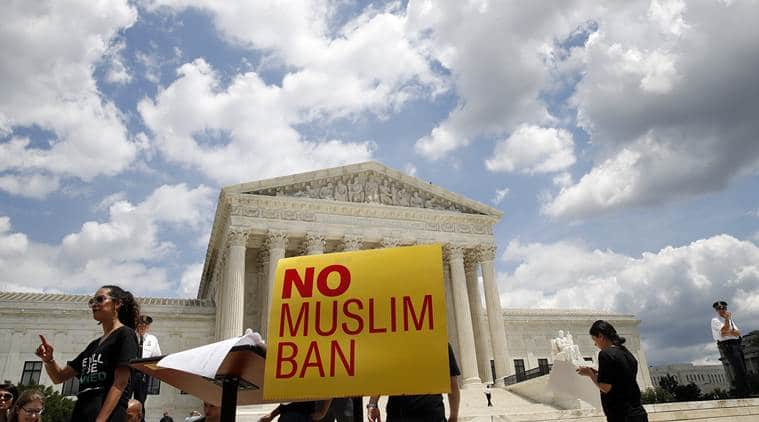 A protest in Washington following the US Supreme Court decision. AP

US President Donald Trump tweeted Tuesday, “SUPREME COURT UPHOLDS TRUMP TRAVEL BAN. Wow!” In its first substantive ruling on a policy decision by the Trump administration, the US Supreme Court had just ruled that the President had enough statutory authority to regulate immigration for purposes of national security, and endorsed the curbs on travel to the United States from several predominantly Muslim countries.

Chief Justice John G Roberts Jr, who wrote for the 5-4 majority on the Bench, underlined that “the issue before us is not whether to denounce the (President’s many anti-Muslim) statements”. Trump’s directive was “within the core of (his) executive responsibility”, and in reviewing it, “we must consider not only the statements of a particular President, but also the authority of the presidency itself”, Roberts said. The Supreme Court’s decision represented a huge political victory for Trump, who is currently facing an uproar over the treatment of migrants at America’s border with Mexico, including separation of children from their families. The President described the verdict as a “tremendous victory for the American people and the Constitution”.

Trump has said “Islam hates us”, and called for a “total and complete shutdown of Muslims entering the United States”. Securing American borders from Muslims and Mexicans — by building a wall — was his headline campaign promise. Soon after taking office, he issued his first travel ban in January 2017, which triggered a wave of lawsuits, and was struck down by several courts.

Two other versions followed, and in December, the Supreme Court allowed the ban on most or many citizens of eight countries from emigrating, as the legal challenges to the order proceeded. Trump’s core agenda of “Make America Great Again” and “America First” tie in with his moves to curb migrations into the United States.

The Chief Justice and eight Associate Justices of the US Supreme Court occupy the bench for life, and have fairly clear conservative or liberal legal philosophies. Of the current judges, Justices Clarence Thomas, Neil Gorsuch, Samuel Alito, John Roberts, and Anthony Kennedy are considered to be conservatives of varying shades, while Sonia Sotomayor, Ruth Bader Ginsburg, Elena Kagan and Stephen Breyer are considered to be liberals. The conservative justices are in a 5-4 majority, which was achieved after House Republicans blocked President Barack Obama’s choice of Merrick Garland to replace the late Antonin Scalia, and Trump got a chance to appoint Justice Gorsuch. The travel ban decision was given by the conservative majority of Roberts, Thomas, Alito, Gorsuch, and Kennedy, which upheld the President’s power to “suspend the entry of all aliens or any class of aliens” as he saw necessary. The minority of Sotomayor, Breyer, Ginsburg and Kagan rejected the majority’s conclusions. Justice Sotomayor observed, “History will not look kindly on the court’s misguided decision today, nor should it.” She said her colleagues in the majority had “ignored facts, misconstruing our legal precedent and turned a blind eye to the pain and suffering the Proclamation inflicts upon countless families and individuals…”

Who is impacted, how

The travel ban extends to five Muslim-majority countries — Iran, Libya, Somalia, Syria and Yemen. There are also restrictions on travellers from North Korea and Venezuela, but this has not been challenged in the court. Iraq, Chad and Sudan were initially included in the ban but were later dropped from the list of countries. These countries were chosen by the administration as they had a “significant terrorist presence within their territory”.

Travellers from these countries are allowed to seek permission to visit the US on a case-by-case basis. The US has said that exemptions may be allowed for certain travellers who may want to travel for medical treatment, visit a family member, or for business, for instance. However, according to The Associated Press, the administration has granted permission to less than 2% of applicants since the policy came into effect last December. Of the 33,176 people who applied for visas, only 579 applicants were cleared. Also, 1,147 people received visas through other means such as diplomatic, or due to pre-existing refugee status. Nearly 5,000 were found “ineligible” for unspecified reasons unrelated to the travel ban, the Associated Press reported.