The WHO balance sheet: How it is funded, where it spends

Coronavirus (COVID-19): President Donald Trump has declared he will halt US funding to WHO. How much does WHO get from the US and other member states, including India? Where does it spend? What is its role in India’s COVID-19 battle? A logo is pictured outside a building of the World Health Organization (WHO) during an executive board meeting on update on the coronavirus outbreak, in Geneva, Switzerland, February 6, 2020. (Reuters Photo: Denis Balibouse)

Coronavirus (COVID-19): After days of sniping at the World Health Organization (WHO) over its handling of the COVID-19 pandemic, President Donald Trump on Wednesday announced that he would halt the funding the US gives to the WHO, which he said was mismanaging the spread. This comes when the global case load approaches 2 million, including over 1 lakh deaths; the US has seen the most cases (over 6 lakh) and deaths (over 26,000).

India reacted cautiously to Trump’s announcement, avoiding an official response and maintaining the country’s focus now is containment and management of the outbreak.

Explained: Where does WHO get its funding from?

For the WHO, the loss of about 15% of its total funding is bound to have an impact the world over. However, unless other countries do the same as the US, the move may not severely hamstring WHO operations.

What does the WHO do with its funds?

The WHO is involved in various programmes. For example, in 2018-19, 19.36% (about $1 bn) was spent on polio eradication, 8.77% on increasing access to essential health and nutrition services, 7% on vaccine preventable diseases and about 4.36% on prevention and control of outbreaks. The Africa countries received $1.6 bn for WHO projects; and South East Asia (including India) received $375 mn. India is a member state of the WHO South East Asia Region. The Americas received $62.2 mn for WHO projects. That is where most of WHO funding comes from and the least of it goes.

How does WHO prioritise spending?

The annual programme of work is passed by WHO’s decision-making body, the World Health Assembly. It is attended by delegates from all member states and focuses on a specific health agenda prepared by the Executive Board. The main functions of the Assembly, held annually in Geneva, are to determine WHO policies, appoint the Director-General, supervise financial policies, and review and approve the proposed programme budget.

Read | WHO chief expresses ‘regret’ over US decision to freeze funding

The decision on which country gets how much depends on the situation in the countries. The WHO’s 13th General Programme of Work (2019-23) lays down: “Unequal development in different countries in the promotion of health and control of diseases, especially communicable diseases, is a common danger.” COVID-19 is the name given by WHO to an infectious disease caused by the new virus. (AP Photo/File)

How involved is WHO in India?

India became a party to the WHO Constitution on January 12, 1948. The first session of the WHO Regional Committee for South-East Asia was held on October 4-5, 1948 in the office of India’s Health Minister, and inaugurated by Prime Minister Jawaharlal Nehru. 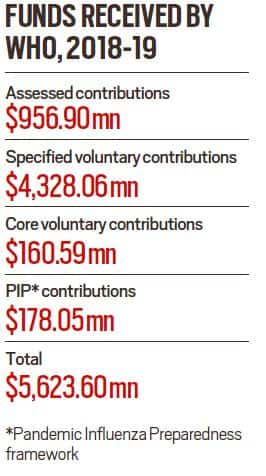 The WHO India Country Cooperation Strategy (CCS) 2019-2023 has been developed jointly by the Health Ministry and the WHO India country office. According to a WHO statement: “This CCS not only builds upon the work that WHO has been supporting out in the last several years, but also expands to address complex challenges-such as the prevention of NCDs, the control of antimicrobial resistance (AMR), the reduction of air pollution, and the prevention and treatment of mental illnesses — WHO will further expand its collaboration with a broader set of government sectors and other stakeholders beyond health, under the overall guidance of the MoHFW (Ministry of Health and Family Welfare), as well as continue to work collaboratively with other United Nations (UN) agencies and international partner.”

The CCS’s strategic priorities are to accelerate progress on Universal Health Coverage, promote health and wellness by addressing determinants of health, better protect the population against health emergencies and enhance India’s global leadership in health.

On the ground, WHO has been a key partner in the immunisation programme, tackling TB and neglected diseases such as leprosy and kala azar, and nutrition programmes across states. The credit for the success of a programme is always of the country; the WHO plays a supportive role. That is why a WHO country office is rarely ever critical of a government, even when its chosen path is different from what WHO advises — a case in point is India’s reluctance to test broadly for COVID-19 even though WHO emphasised its importance.

How have WHO and India worked together in the COVID-19 pandemic?

According to Dr Henk Bekedam, WHO country representative in India, “India is at a crucial juncture in its fight against COVID-19. It is a moment that must be fully seized. WHO has been working closely with MoHFW and various state governments on preparedness and response measures for COVID-19, including surveillance and contact tracing; laboratory and research protocols; risk communications; hospital preparedness; training on infection prevention and control and cluster containment plan. WHO stands together in solidarity with the government in its firm resolve to overcome this unprecedented challenge.”

India has, however, largely built its own strategy, from its reluctance to test to the early travel restrictions to and from China and then the lockdown. While India imposed a lockdown when cases were just 341 (on March 22, starting with 75 districts), its resistance to mass testing is akin to the US’s strategy. India has also taken a call on universal use of masks when the WHO maintained that masks protect others rather than the wearer and need not be mandatory.

What is the basis of criticism the WHO faces from various countries?

While most countries closed down air travel at the first stage, the WHO for a long time took a stand against travel and trade restrictions on China. On January 30, WHO Director General Dr Tedros Adhanom Ghebreyesus said the WHO opposed such an idea. The same day, the International Health Regulations (2005) Emergency Committee urged countries to be prepared, but “the Committee does not recommend any travel or trade restriction based on the current information available. “

According to senior officials in the National Centre for Disease Control, in January when cases were piling up in China, there was a meeting in Delhi in which WHO officials brushed aside government concerns saying “there is no human to human transmission”. “When cases kept going up and moved out of Wuhan, we asked what’s happening? Either there are more sources than just one wet market in one province or there is clearly human to human transmission happening,” said a source.

Covid-19: Graded lifting of curbs from April 20; states to decide zones of containment