Explained: Why the Delta variant of Covid-19 spreads more rapidly than other strains

More people infected with the Delta variant of Covid-19 are likely to pass on the infection to others before they even suspect they may be ill. A vendor wearing a face mask as a precaution against the coronavirus displays toys for sale at Fort Kochi beach in Kochi, Kerala, Monday, Aug. 23, 2021. (AP Photo: R S Iyer)

As scientists find themselves racing against time to find the biological basis for the transmission of the Delta variant of Covid-19, several new studies have found that key mutations reduced effectiveness of vaccines, and high infectiousness during the pre-symptomatic phase in patients are among the main reasons fuelling the rapid spread.

WHO chief Tedros Adhanom Ghebreyesus, at a press briefing, had earlier said that Delta is the most transmissible variant identified so far, and it is fast becoming the dominant Covid-19 strain in many countries. According to an internal presentation circulated within the US Centers for Disease Control and Prevention (CDC), the Delta variant is more transmissible than the viruses that cause MERS, SARS, Ebola, the common cold, the seasonal flu and smallpox, and it is at least as contagious as chickenpox. 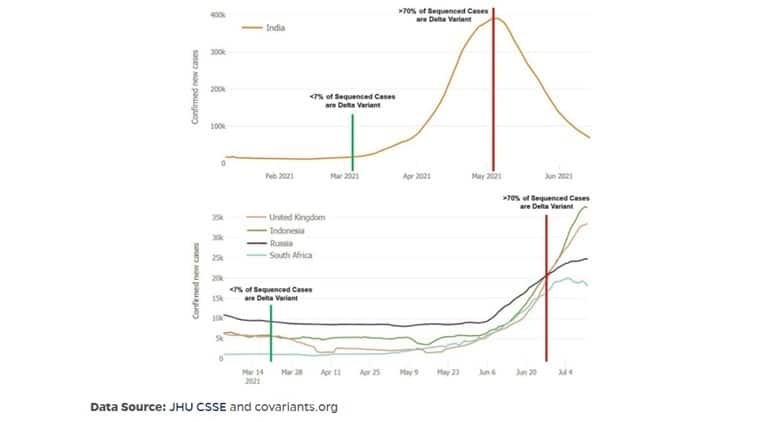 Why is the Delta variant more infectious?

Recent research suggests that a key amino acid mutation may be behind the ferocious infectivity of the Delta variant.

A team of researchers led by University of Texas Medical Branch virologist Pei-Yong Shi has zeroed in on a key mutation that alters a single amino acid in the SARS-CoV-2 spike protein. The change is called P681R and transforms a proline residue into an arginine, according to a report on the study published in Nature journal. The change occurs in the spike protein’s furin cleavage site.

In order to penetrate cells, the SARS-CoV-2 spike protein must be cut twice by host proteins. The furin cleavage site in Covid-19 is significant because it means that the host enzymes, including furin, can make the first cut. After this, newly formed viral particles emerge from an infected cell which can infect the host cells more efficiently.

The Alpha variant also carries a mutation in the same location, though it comprises a change in a different amino acid. The study states that in case of Delta, the mutation that alters the furin cleavage has had a profound effect.

Advertisement
Also in Explained |Can the vaccinated develop long Covid after a breakthrough infection?

In a pre-print of the study which was made available recently, the researchers stated that the spike protein is cut much more efficiently in Delta-variant particles than in Alpha, with the P681R mutation being largely responsible for the spike being clipped efficiently.

The study echoes the findings of research conducted by a team led by Kei Sato, a virologist at the University of Tokyo, which found that spike proteins that bear the P681R can fuse with the plasma membranes of uninfected cells almost three times faster than if the mutation is missing. 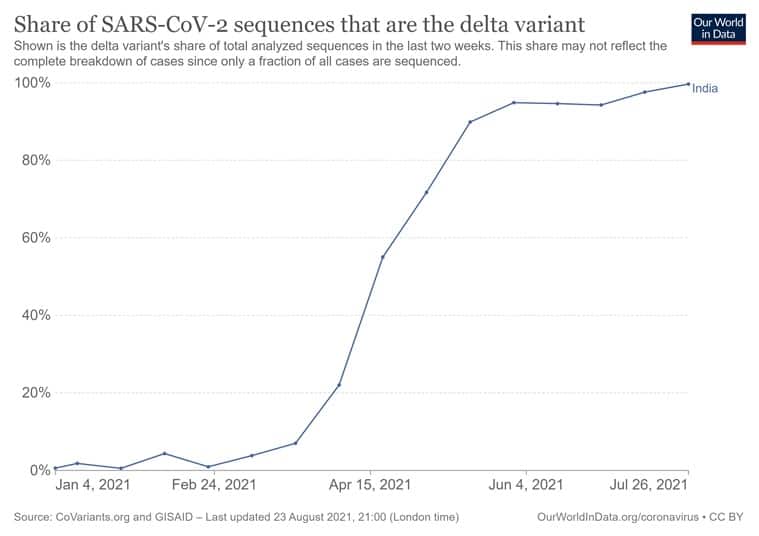 Source: CoVariants.org and GISAID via Our World in Data

Are other key mutations also responsible for Delta’s rapid transmission?

Scientists have said that the Delta variant has several key mutations and the P681R change, though significant, is unlikely to be the only reason fueling its rapid transmission.

Researchers in Uganda said the P681R change was present in a variant that spread widely in the country in early 2021, but has not proved to be as infectious as Delta. The Kappa variant, Delta’s sibling which was identified in India, also had the same mutation but researchers have found that its spike protein is cleaved less frequently and fuses to cell membranes less efficiently.

Previous studies have found that other key mutations in the Delta variant such as L452R and D6146 allow the virus to attach more firmly to receptor cells and escape immunity more easily.

Also in Explained |What are the common Covid-19 symptoms for people who are vaccinated?

In fact, the Delta variant has multiple mutations in the S1 subunit of the spike protein, including three in the receptor binding domain, that improves its ability to bind to ACE2 receptors and evade the body’s immune system.

“I think the virus is succeeding on volume and speed. It’s become a much more efficient virus. It’s going through people and going through cells a lot quicker,” Gary Whittaker, a virologist at Cornell University, told Nature. Source: CoVariants.org and GISAID via Our World in Data

Why is it so difficult to stop the Delta variant from spreading?

One of the other reasons for the rapid spread of the Delta variant, as found during a study in Guangzhou, China, is the extremely high level of infectiousness in patients even in the pre-symptomatic phase. This means people are in danger of spreading the virus even before suspecting that they may be infected.

A recent study by Benjamin Cowling, an epidemiologist at the University of Hong Kong and his colleagues, found that people began having symptoms 5.8 days after infection with Delta — 1.8 days after they first tested positive for viral RNA. This, therefore, leaves a dangerous window for the virus transmission to take place.

In other words, since the onset of symptoms happens later, more people infected with the Delta variant are likely to pass on the infection to others even before they even suspect that they may be ill.

The study found that 74% of infections with Delta took place during the pre-symptomatic phase. The researchers also found that R-naught, or the basic reproduction number, which represents, on average, the number of people that a single infected person can be expected to transmit that disease, for Delta is 6.4. To put things into perspective, the R-naught of the Wuhan strain, according to several studies done earlier, was between 2 to 4.

Is reduced vaccine effectiveness against Delta a matter of concern?

Several studies have found that the effectiveness of vaccines is reduced against the Delta variant, which in turn leaves fully-vaccinated individuals vulnerable to breakthrough infections.

An earlier study by Public Health England had found that the effectiveness of the Oxford-AstraZeneca vaccine comes down to 64% against the Delta variant. Earlier, a study published in The Lancet journal had also found that those fully-vaccinated with the Pfizer vaccine are likely to have more than five times lower levels of neutralising antibodies against the Delta variant as compared to the original strain.

More recently, data from the Israel Health Ministry had shown that two shots of Pfizer offer 64% protection against Covid, at a time when over 90 per cent of the cases being reported in the country was caused by the Delta variant.

Another area of concern is the effectiveness of vaccines waning over time. Researchers at the University of Oxford in the UK and the country’s Office for National Statistics in a recent study found that the effectiveness of the Pfizer vaccine went down to 90 per cent a month after taking the second dose, to 85 per cent after two months and 78 per cent after three. For AstraZeneca, the equivalent protection offered were 67, 65 and 61 per cent.

The study also found that even in fully-vaccinated people, infections caused by the Delta variant produced peak viral loads which were similar to that in unvaccinated individuals. Studies carried out in the US and Singapore have produced similar results.

This means that the biggest point of concern is that even fully-vaccinated people can spread the Delta variant, which makes it very difficult to break the chain of transmission.

A report published by the CDC this month states that following large gatherings in the beach town of Provincetown in Massachusetts, 469 Covid-19 cases were reported in the state, out of which nearly three-quarters were among vaccinated people.

On analysis it was found that just like the unvaccinated people, those who have taken the jabs also had high Ct values, indicating a high viral load. After genome sequencing 133 samples, 90% of the cases were found to be caused by the Delta variant. Following the findings, the CDC on July 27 updated its guidelines once again, and recommended and even vaccinated people should wear masks when in areas which have a “substantial” and “high” transmission of Covid-19.

Spider-Man No Way Home trailer: Tom Holland fights multiverse villains in thrilling ride, there’s a surprise in the end too