Explained: The legacy of James Bond

James Bond: A look back at the character, its origins and the enduring mass appeal that has lasted for more than half a century. 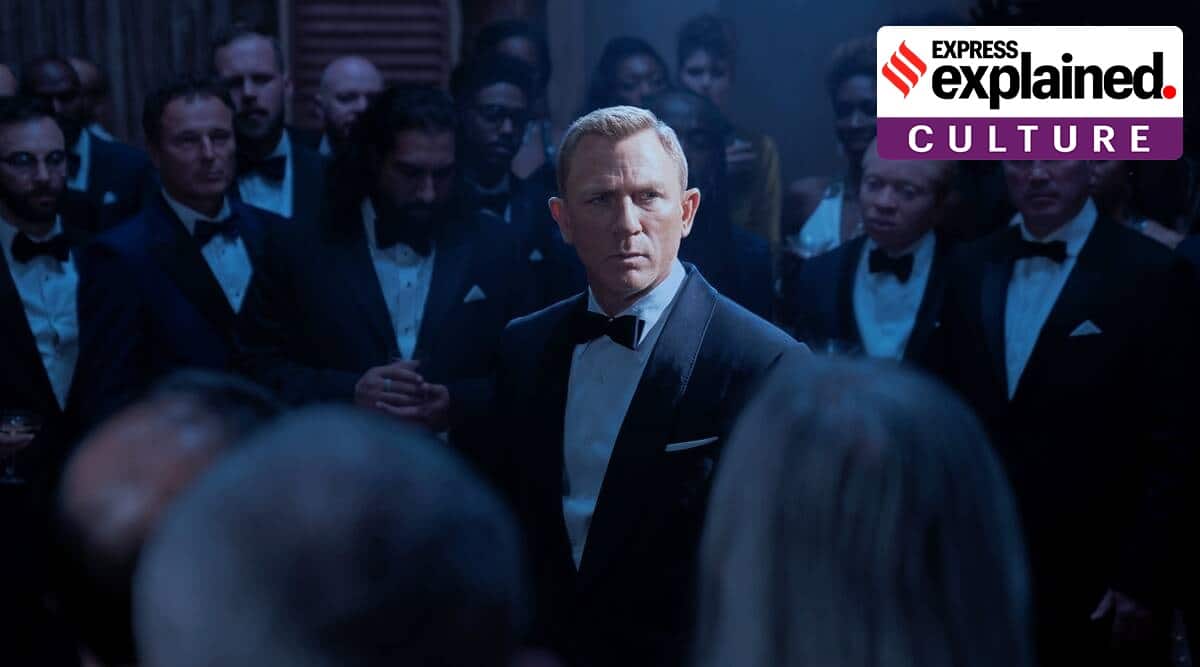 After a prolonged gap of six years, the words ‘The name is Bond, James Bond’, will echo in Indian cinema halls, as the 25th offering in the James Bond franchise released on Thursday. Titled No Time to Die, the film is the last outing of actor Daniel Craig as James Bond. The latest offering from the Bond franchise has been directed by Cary Joji Fukunaga and the screenplay has been put together by Neal Purvis, Robert Wade and Fleabag fame Phoebe Waller-Bridge. The film, released globally, has earned universal good reviews, and many have called it the perfect goodbye by actor Daniel Craig to the world-famous character. Craig has often been praised for his raw, emotional portrayal of the peerless spy, adding layers and a complexity that was missing in the earlier renditions of the character.

We look back at the character, its origins and the enduring mass appeal that has lasted for more than half a century.

James Bond today is known as a spy who works at MI6, the Secret Intelligence Service and is popularly known by his code number 007 — pronounced double-O-7. But his origin story is not as glamorous as it sounds. The character of James Bond was created by writer Ian Fleming, who made James Bond as the central, key figure of his works. Bond was rooted in all the experiences and the varied people that Fleming had encountered in the time he spent in the Naval Intelligence Division and 30 Assault Unit. Fleming at one point had said (in an interview to the Times in 2008) that “Bond was a compound of all the secret agents and commando types I met during the war”.

James Bond, the name which today immediately conjures up an image of a slick, suave international spy, who guzzles martinis, courts women and simultaneously foils an attempt of a coup in some foreign nation, is actually named after an American ornithologist who was an expert of birds native to the Caribbean. Fleming, too, was an avid bird-watcher and even had a copy of the ornithologist’s book ‘Birds of The West Indies’.

Later in an interview to the The New York Times in 1962, Fleming had explained that James Bond to him was the dullest name he had ever heard. “When I wrote the first one in 1953, I wanted Bond to be an extremely dull, uninteresting man to whom things happened; I wanted him to be a blunt instrument … when I was casting around for a name for my protagonist I thought by God, [James Bond] is the dullest name I ever heard.”

Fleming incorporated many of his own personality traits and tweaks into Bond’s. Like the taste for scrambled eggs, his golf handicap and his own brand of toiletries. Fleming wrote twelve spy novels starring Bond and two short stories. The first one was Casino Royale, which came out in 1953. After the death of Fleming in 1964, writers Kingsley Amis, Christopher Wood, John Gardner, Raymond Benson, Sebastian Faulks and Jeffery Deaver wrote the Bond novels.

Apart from the books, James Bond has featured in TV adaptations, radio broadcasts, comics and films. While the other formats sure, added to the popularity of the character, it was the films that have immortalised this slick spy for eternity. The first Bond film, Dr. No appeared in 1962, and had actor Sean Connery playing the essential first Bond. Connery essayed the role for a total of six films. Actor George Lazenby too played the British spy for one film, On Her Majesty’s Service. Roger Moore, has been till date the longest serving Bond actor, having played James Bond a total of seven times. Timothy Dalton has two Bond films to his credit — The Living Daylights and License to Kill. Pierce Brosnan gave four back-to-back Bond films: GoldenEye; Tomorrow Never Dies; The World is Not Enough and Die Another Day. Daniel Craig stepped into the shoes of this mammoth character and played him for five films. No Time to Die is his last outing as Bond. The films portrayed Bond very differently from the books. The film Bond is a lot more arrogant, confident and has a certain swagger.

The films took Bond to a very obscure corner of planet earth and morphed him into a character that was larger than life. Men wanted to be him, and women wanted to be courted by him. The films showcased Bond as someone who wore a tuxedo as a second skin, could dangle off the side of high rises with surprising ease, and yes, kill without batting an eyelid. Bond is often aided in his efforts by the choicest of gadgets — a pen that can double up as a poison dispenser, or a knife, or even a camera — often times all in one. Bond’s life choices — he drinks a vodka martini, which is shaken not stirred, and he drives an Aston Martin — all this is now part of public domain. While the British detective/mystery solver had always had a place of pride, Bond took it to another level. Even the side characters in the films, like Money Penny — Bond’s secretary and M — the head of the Secret Intelligence Service, are part of public memory.

Today the name James Bond is synonymous with a super spy in any corner of the world. The actors who have essayed Bond have been worshipped by film lovers, and even the music of the films has garnered awards, right from Academy awards to Grammys.

James Bond is actually named after an American ornithologist who was an expert of birds native to the Caribbean. (Photo: MGM)

Mostly, the films are about Bond, and his sheer bravado and quick thinking that always involves saving some part of the planet, but one must remember the Bond girls. The books have the Bond girls defined to the T. They all conform to these standards of beauty, and are almost a decade younger than Bond, and they are often reduced to play the love interest of Bond. The books often named the Bond girls with sexually suggestive names. The films at times changed the brief of the Bond girls. There are several tropes they adhere to, some are just his token love/sex interests, while some assist him on his mission, some are sacrificial lambs, who inevitably end up dying in the course of the film at the hands of the villain and then there are the femme fatales, who or a mission to kill Bond. But in a post #MeToo world, there has been ample criticism of the Bond girl phenomena, and the blatant sexualisation and objectification of them.

There are speculations galore as to who will fill the giant shoes of Daniel Craig. Names of actors like Idris Elba, Rege-Jean Page and Tom Hardy have been doing the rounds, but nothing has stuck so far. There are calls for having a black James Bond, and some have even floated the idea of a female James Bond. But again, nothing has been confirmed. The producers of the Bond Franchise have said that they would only float a new idea of the Bond, after the “dust has settled on the Daniel Craig era”.