Karnataka HC sets aside lower court order to block Congress, Bharat Jodo Yatra Twitter handles: What the case is about

Rahul Gandhi and other Congress leaders had been booked for alleged copyright infringement of KGF-2 songs. What had the Bengaluru court ordered? What has the HC now said? We explain. 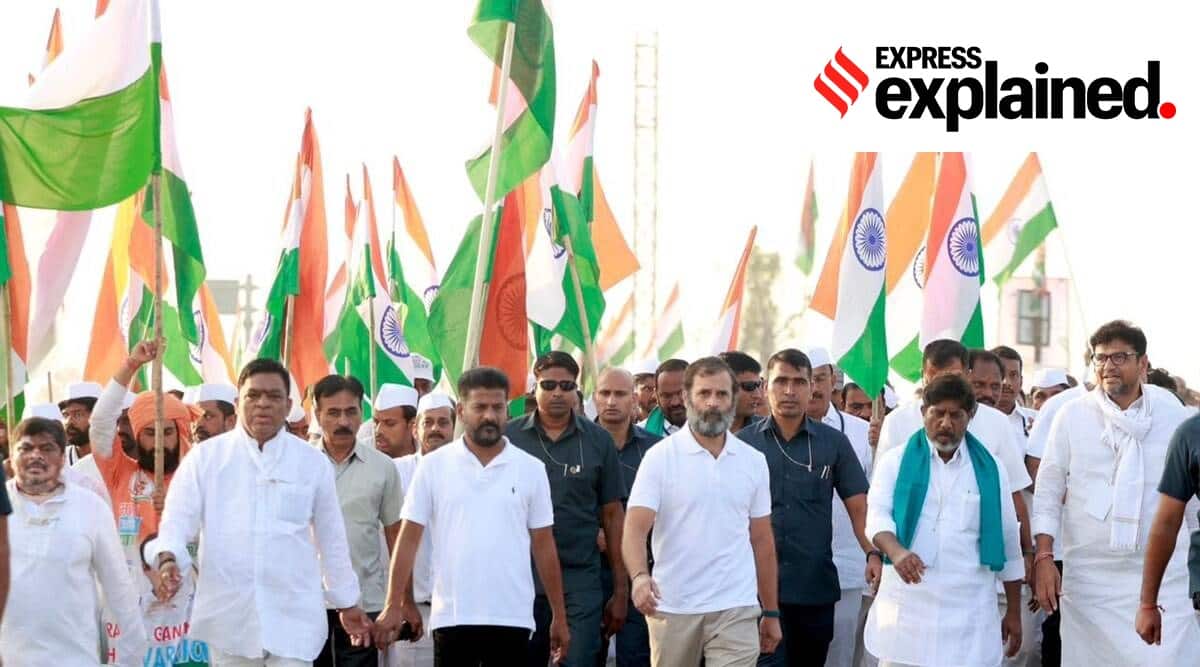 The Congress’ Bharat Jodo Yatra began from Kanyakumari in Tamil Nadu on September 7 and is expected to reach Jammu on January 30, 2023. (Photo: Twitter/@INCIndia)

The Karnataka High Court Tuesday set aside an order of a civil court that had directed Twitter to temporarily block handles of Indian National Congress (INC) and its mass movement Bharat Jodo Yatra.  The Bengaluru court’s order had come in a copyright infringement suit over the use of songs from KGF-2 during the Bharat Jodo Yatra.

The complaint in the case was filed by M Naveen Kumar, who manages MRT Music, the copyright owner of the songs.

The lower court had held that if the Congress and its leaders were not restrained from the unauthorised use of songs, it would cause “irreparable injury” to the plaintiff and also “encourage piracy”. The High Court on Tuesday, while giving relief to the Congress over the blocking of accounts, said the relief was subject to the party removing material from their handles that offend MRT Music’s copyrights.

As reported by livelaw.in, a division bench of Justices G Narendar and PN Desai said, “The impugned order virtually grants an enlarged relief…Shutting out (blocking account) is punitive.”

What is the case about, and what exactly has the court said? We explain.

On Friday (November 4), three senior Congress leaders including Rahul Gandhi were booked for alleged unauthorised usage of the music from the blockbuster Kannada film ‘KGF-2’ during the Bharat Jodo Yatra.

The FIR was registered at the Yashwanthpur police station under the provisions of Copyright Act, the Information Technology Act and the Indian Penal Code against Gandhi, Jairam Ramesh and Supriya Shrinate, on the complaint by Kumar.

The complainant alleged that Jairam Ramesh had on his official Twitter handle posted two videos of the yatra, in which popular songs from KGF-2 film were used without permission. “On perusal of the videos it is clear that all the accused have fraudulently, blatantly and slavishly with an intention of making wrongful gains have unauthorizedly and illegally used the sound recording owned and held by the Complainant,” Kumar alleged.

What the Bengaluru court said

The court asked Twitter to take down three tweets posted by Congress handles and temporarily block handles of Congress and Bharat Jodo Yatra; it asked the defendants to not “unauthorisedly and illegally” use the plaintiff’s copyrighted work till the next date of hearing; and ordered the appointment of a commissioner “to inspect and conduct necessary electronic audit and also to seize or preserve the infringing material.”

“I have carefully considered all documents produced along with the plaint also the CD produced by plaintiff by playing the same in court system. Plaintiff has specifically produced CD showing the side by side file i.e., original version of his copyrighted work with that of the illegally synchronized version. These prima facie materials available before this court at this stage establishes that if same is encouraged plaintiff who is in the business of acquiring cinematography films, songs, music albums etc., will be put to irreparable injury and further same leads to encouraging the piracy at large,” the court said.

On the appointment of a commissioner, the court said, “This court is convinced that object of granting an injunction would be defeated by delay if commissioner is not appointed to make local inspection. Accordingly, Sri SN Venkateshmurthy, District System Administrator of Computer Section, Commercial Court, Bengaluru is appointed as Local Commissioner to visit the defendants 1 to 3 website, conduct electronic audit and preserve the infringing materials available in the above social media and prepare inventory of the same and store the same in this court’s system and separate CD.”

It also allowed the plaintiff’s representatives to accompany the Technical Commissioner and to “take photos or videographs of the commission proceedings.”

What the Congress said

On Tuesday, Senior Advocate Abhishek Singhvi appeared for the party in the Karnataka High Court.

According to livelaw.in, Singhvi submitted that there was no urgent need to block the Twitter handles, and doing so would impact the Congress’s freedom of expression. “You only want that 45 secs clip (allegedly infringing MRT Music’s copyright) won’t be shown. We undertake that it will not be; it was inadvertently put up,” Singhvi was quoted as telling the Bench by livelaw.