Explained: With Covid-19 mutating, what does that mean for us?

Like all viruses, the coronavirus is a shape-shifter. Some genetic changes are inconsequential, but some may give it an edge. 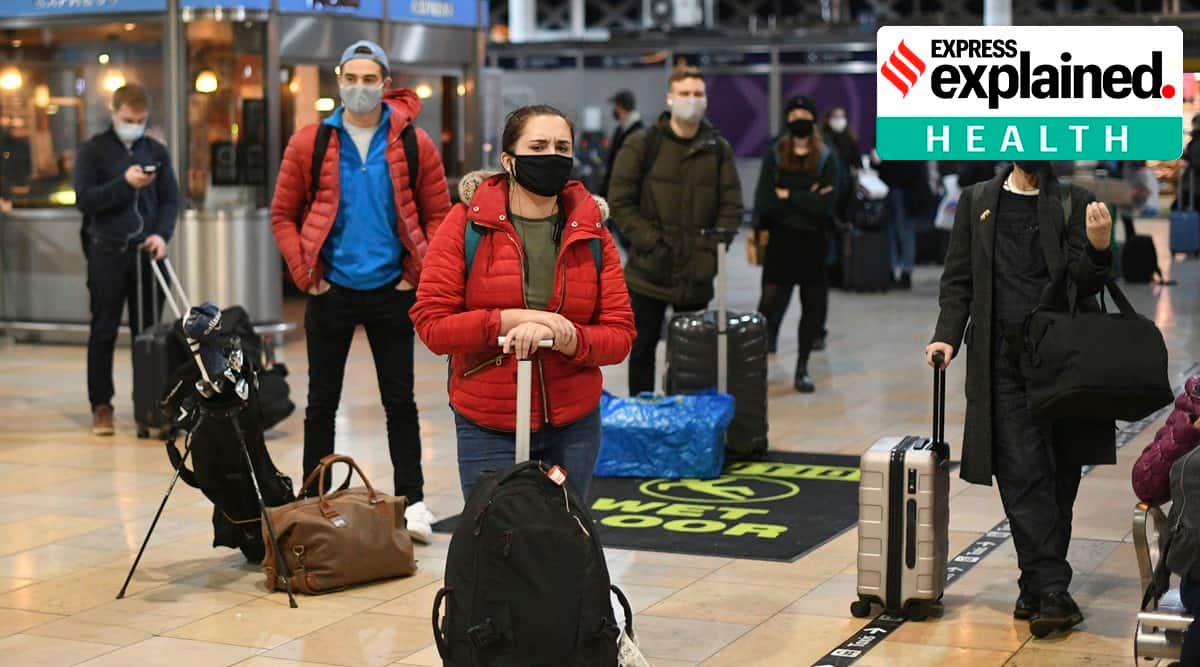 People wait on the concourse at Paddington Station in London, after the announcement that London will move into Tier 4 Covid-19 restrictions from midnight, Saturday Dec. 19, 2020. (Stefan Rousseau, PA via AP)

Just as vaccines begin to offer hope for a path out of the pandemic, officials in Britain this past weekend sounded an urgent alarm about what they called a highly contagious new variant of the coronavirus circulating in England.

Citing the rapid spread of the virus through London and surrounding areas, Prime Minister Boris Johnson imposed the country’s most stringent lockdown since March.

“When the virus changes its method of attack, we must change our method of defense,” he said.

Train stations in London filled with crowds of people scrambling to leave the city as the restrictions went into effect. On Sunday, European countries began closing their borders to travelers from the United Kingdom, hoping to shut out the new iteration of the pathogen.

In South Africa, a similar version of the virus has emerged, shares one of the mutations seen in the British variant, according to scientists who detected it. That virus has been found in up to 90% of the samples whose genetic sequences have been analyzed in South Africa since mid-November.

Scientists are worried about these variants but not surprised by them. Researchers have recorded thousands of tiny modifications in the genetic material of the coronavirus as it has hopscotched across the world.

Advertisement
Also in Explained |New coronavirus strain in UK: How rapidly has it spread? Will it impact vaccination?

Some variants become more common in a population simply by luck, not because the changes somehow supercharge the virus. But as it becomes more difficult for the pathogen to survive — because of vaccinations and growing immunity in human populations — researchers also expect the virus to gain useful mutations enabling it to spread more easily or to escape detection by the immune system.

“It’s a real warning that we need to pay closer attention,” said Jesse Bloom, an evolutionary biologist at the Fred Hutchinson Cancer Research Center in Seattle. “Certainly, these mutations are going to spread, and definitely, the scientific community, we need to monitor these mutations, and we need to characterize which ones have effects.”

The British variant has about 20 mutations, including several that affect how the virus locks onto human cells and infects them. These mutations may allow the variant to replicate and transmit more efficiently, said Muge Cevik, an infectious disease expert at the University of St. Andrews in Scotland and a scientific adviser to the British government.

But the estimate of greater transmissibility — British officials said the variant was as much as 70% more transmissible — is based on modeling and has not been confirmed in lab experiments, Cevik added.

“Overall, I think we need to have a little bit more experimental data,” she said. “We can’t entirely rule out the fact that some of this transmissibility data might be related to human behavior.”

In South Africa, too, scientists were quick to note that human behavior was driving the epidemic, not necessarily new mutations whose effect on transmissibility had yet to be quantified.

The British announcement also prompted concern that the virus might evolve to become resistant to the vaccines just now rolling out. The worries are focused on a pair of alterations in the viral genetic code that may make it less vulnerable to certain antibodies.

A woman walks on a rain-soaked Oxford Street in London. (The New York Times: Andrew Testa)

But several experts urged caution, saying it would take years — not months — for the virus to evolve enough to render the current vaccines impotent.

“No one should worry that there is going to be a single catastrophic mutation that suddenly renders all immunity and antibodies useless,” Bloom said. “It is going to be a process that occurs over the time scale of multiple years and requires the accumulation of multiple viral mutations. It’s not going to be like an on-off switch.”

The scientific nuance mattered little to Britain’s neighbors. Worried by the potential influx of travelers carrying the variant, the Netherlands said it would suspend flights from Britain from Sunday until Jan. 1.

Italy also suspended air travel, and Belgian officials Sunday enacted a 24-hour ban on arrivals from the United Kingdom by air or train. Germany is drawing up regulations limiting travelers from Britain as well as from South Africa.

Other countries are also considering bans, among them France, Austria and Ireland, according to local media. Spain has asked the European Union for a coordinated response to banning flights. Gov. Andrew Cuomo of New York asked the Trump administration to consider banning flights from Britain.

In England, transport officials said that they would increase the number of police officers monitoring hubs like railway stations to ensure only essential journeys were being taken. The country’s health secretary, Matt Hancock, on Sunday called those who were packing trains “clearly irresponsible.”

He also said that the restrictions Johnson imposed could be in place for months.

Like all viruses, the coronavirus is a shape-shifter. Some genetic changes are inconsequential, but some may give it an edge.

Scientists fear the latter possibility especially. The vaccination of millions of people may force the virus to new adaptations, mutations that help it evade or resist the immune response. Already, there are small changes in the virus that have arisen independently multiple times across the world, suggesting the mutations are helpful to the pathogen.

The mutation affecting antibody susceptibility — technically called the 69-70 deletion, meaning there are missing letters in the genetic code — has been seen at least three times: in Danish minks, in people in Britain and in an immune-suppressed patient who became much less sensitive to convalescent plasma.

“This thing’s transmitting. It’s acquiring. It’s adapting all the time,” said Dr. Ravindra Gupta, a virologist at the University of Cambridge who last week detailed the deletion’s recurrent emergence and spread. “But people don’t want to hear what we say, which is, this virus will mutate.”

A woman pulls a suitcase past a Christmas tree on the concourse of Waterloo Station in central London, Sunday, Dec. 20, 2020. (Victoria Jones, PA via AP)

The new genetic deletion changes the spike protein on the surface of the coronavirus, which it needs to infect human cells. Variants of the virus with this deletion arose independently in Thailand and Germany in early 2020 and became prevalent in Denmark and England in August.

Several recent papers have shown that the coronavirus can evolve to avoid recognition by a single monoclonal antibody, a mixture of two antibodies or even convalescent serum given to a specific individual.

Fortunately, the body’s entire immune system is a much more formidable adversary.

The Pfizer-BioNTech and Moderna vaccines induce an immune response only to the spike protein carried by the coronavirus on its surface. But each infected person produces a large, unique and complex repertoire of antibodies to this protein.

“The fact is that you have a thousand big guns pointed at the virus,” said Kartik Chandran, a virus expert at the Albert Einstein College of Medicine in New York. “No matter how the virus twists and weaves, it’s not that easy to find a genetic solution that can really combat all these different antibody specificities, not to mention the other arms of the immune response.”

In short: It will be very hard for the coronavirus to escape the body’s defenses, despite the many variations it may adopt.

Escape from immunity requires that a virus accumulate a series of mutations, each allowing the pathogen to erode the effectiveness of the body’s defenses. Some viruses, like influenza, amass those changes relatively quickly. But others, like the measles virus, collect hardly any of the alterations.

Don't miss from Explained |Explained: The row in UK around breastfeeding mothers getting Covid-19 vaccine

The scale of the infections in this pandemic may be quickly generating diversity in the new coronavirus. Still, a vast majority of people worldwide have yet to be infected, and that has made scientists hopeful.

“It would be a little surprising to me if we were seeing active selection for immune escape,” said Emma Hodcroft, a molecular public health researcher at the University of Bern in Switzerland.

“In a population that’s still mostly naive, the virus just doesn’t need to do that yet,” she said. “But it’s something we want to watch out for in the long term, especially as we start getting more people vaccinated.”

Immunizing about 60% of a population within about a year and keeping the number of cases down while that happens will help minimize the chances of the virus mutating significantly, Hodcroft said.

Still, scientists will need to closely track the evolving virus to spot mutations that may give it an edge over vaccines.