Coronavirus numbers explained: A first, more than 1,00,000 tests a day

India Coronavirus Cases: India has been testing more and more every day, and it is very well established that more the tests are done, higher would be cases detected. 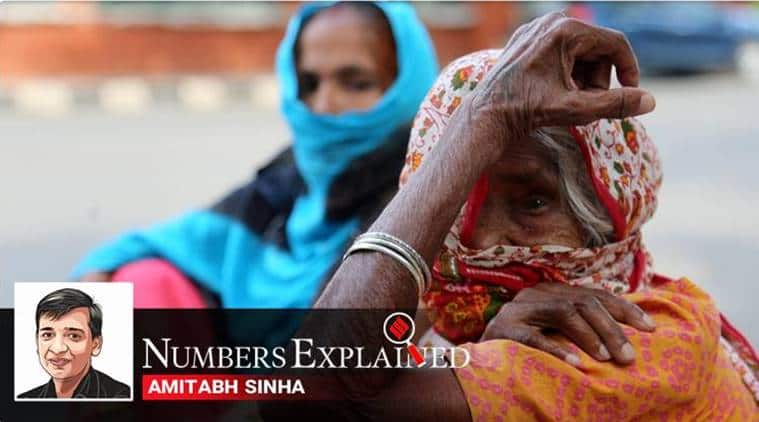 Narayani, 70, and her daughter Krishna wait outside the Guru Nanak Dev Stadium in Ludhiana where they undergo medical screening before boarding a Special shramik Train to Hardoi in Uttar Pradesh. (Express Photo: Gurmeet Singh)

Every day since Sunday, India has detected more than 5,000 new cases of novel Coronavirus infections. This seems to have become the new normal from the 3,500 to 3,800 cases that were being reported every day for about a week prior to that. On Tuesday, more than 5,200 new cases were discovered, to take India’s total number of confirmed infections to well past 1.05 lakh.

One of the reasons for the increased number of cases being detected every day is the continuously expanding baseload. A larger baseload of cases will lead to greater number of new infections every day even if there is no surge. So, while the absolute number of new infections has been increasing steadily, the rate of growth in the new cases has remained more or less unchanged. In fact, it has even slowed down in between.

Another reason for the new cases shooting up could be the impact of relaxations announced in the lockdown. Large-scale movement of people in the last few days has led to the spread of the disease in new populations. This is evidenced by the fact that states like Bihar and Odisha, which are receiving large number of workers returning from other places, have seen a sharp rise in cases in recent days. In other states too, the people on the move are significant contributors to their daily numbers in the last ten days. 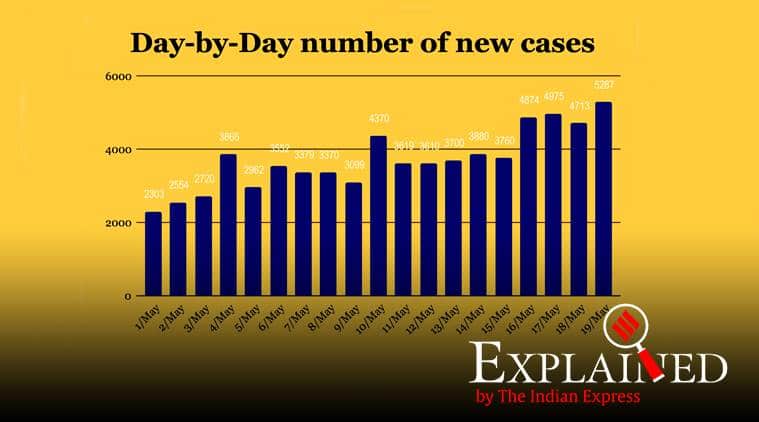 On Tuesday, more than 5,200 new cases were discovered, to take India’s total number of confirmed infections to well past 1.05 lakh.

But, the rise in new infections is also due to enhanced testing. India has been testing more and more every day, and it is very well established that more the tests are done, higher would be cases detected. That is because most of the infected people are asymptomatic, meaning they do not show any symptoms of the disease, and they can be detected only if they are tested. But they are as likely to infect others as those with symptoms. That is why experts and scientists keep on emphasising on the need for greater number of tests.

India’s testing numbers has been rising steadily, but on Sunday, for the first time, more than one lakh samples were tested in a single day. It was followed by 1.08 lakh tests on Monday. India has so far tested over 2.5 million samples.

The states with larger caseloads — Maharashtra, Tamil Nadu, Gujarat, Delhi — are also the ones with higher number of tests. On the other hand, it has now emerged that Telangana, which had been reporting a surprisingly low growth in numbers for the past one month, has one of the poorest records on testing.

Telangana, which has more than 1,600 cases, had, till May 14, carried out tests on just 22,842 samples. This was even lower than the tests done by Chhattisgarh and Assam, both of which had less than 100 cases on May 14.

For the sake of comparison, Jammu and Kashmir, which has just over 1,300 cases right now, has tested over 96,000 samples. Odisha, which has just crossed 1,000 cases has conducted over a lakh tests, while even Haryana, which has 964 cases, has done more than 80,000.

Andhra Pradesh, Telangana’s neighbouring state, has less than 2,400 cases and it has carried out more than 2.5 lakh tests.

Stranded in other states, those who left to work say, ‘Punjab govt helping migrants, but what about us?’