China’s Premier Li Keqiang removed from post: What is happening, and why

Who is Li Keqiang, and why has Xi Jinping dropped his number 2 official from the Standing Committee? What does this removal indicate? We explain. 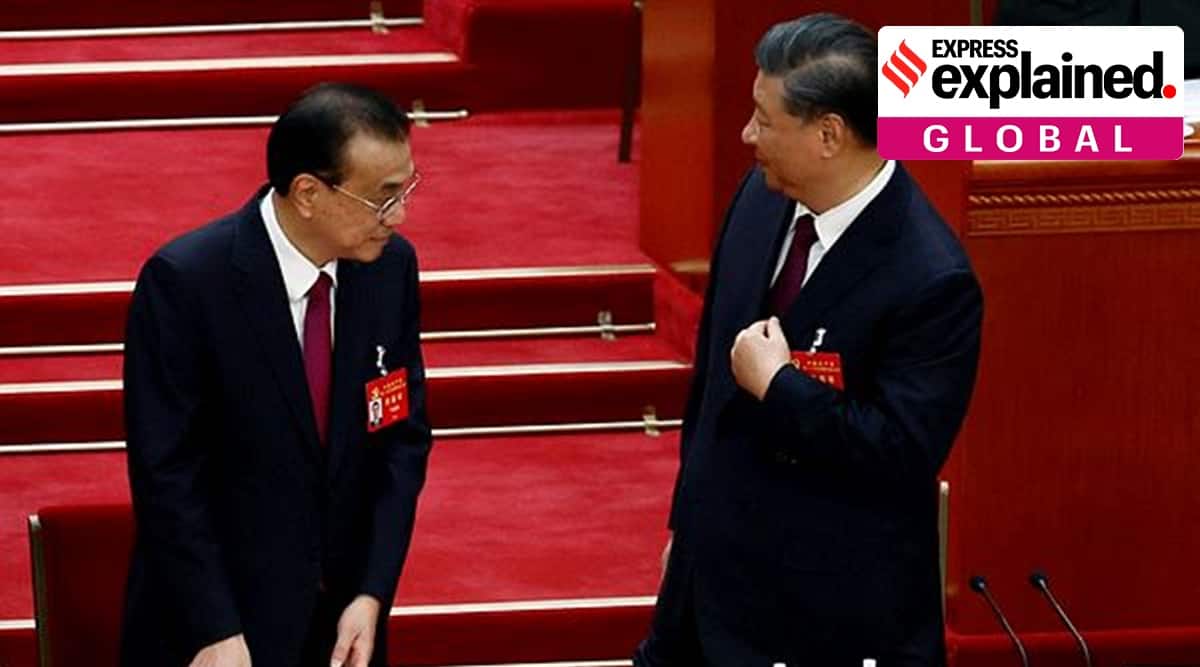 Chinese President Xi Jinping and Premier Li Keqiang leave at the end of the closing ceremony of the 20th National Congress of the Communist Party of China, at the Great Hall of the People in Beijing, China October 22. (Photo: Reuters)

In yet another demonstration of Chinese President Xi Jinping’s stronghold on the country and the ruling Communist Party, Premier Li Keqiang, the nation’s Number 2 leader, was on Saturday dropped from the Politburo Standing Committee, the group of seven most powerful people who govern China.

In the ongoing party Congress in Beijing, the Communist Party Saturday elected its new 205-member Central Committee, from which the names of Li and three others were missing. This means they can’t retain their place in the Politburo Standing Committee, whose members will be announced Sunday.

Also in Explained |Why is everyone talking about Hu Jintao, China’s former president?

The three others who were dropped were Li Zhanshu (72), a longtime Xi ally, Wang Yang (67), party advisory body head and Number 4 in the government, and Han Zheng (68), Shanghai party chief. Li Zhanshu and Han were expected to step down as they had crossed the ‘retirement age’ of 67.

Li Keqiang will continue as the premier for six months, until his successor is named.

Who is Li Keqiang, and why has Xi dropped his number 2 official from the Standing Committee? What does this removal indicate? We explain.

Premier Li Keqiang, who rose through party ranks from a humble beginning, was once a strong candidate for the President of China, until he was taken over by Xi, who comes from the ‘princeling’ faction (sons of senior leaders) of the Communist Party. Li is a proponent of market-oriented reforms, as opposed to Xi’s policy of strong state control over the economy.

Li belongs to the “tuanpai” or populist faction of the party, comprising members with a Communist Youth League background. He was a protegee of Hu Jintao, the man who was supreme leader of China before Xi. On the day Li was dropped from the Politburo Standing Committee, Hu was seen being led out of the National Congress, and the footage has sparked an online buzz.

Who is Li Keqiang

Li was born in July 1955 in Hefei in the Anhui province of China, where his father was a small-time local official. When he was 19, his education was interrupted as he had to go to eastern Anhui as a ‘sent-down youth’, under the Mao government’s policy of sending urban youth to work in rural areas.

He joined the Chinese Communist Party (CCP) in 1976, and in 1978, went to Peking University to finish his education. He would go on to do very well in academics, earning advanced degrees in economics. In the 1980s, he joined the Chinese Communist Youth League, where he came in contact with its leader Hu Jintao, who eventually became his mentor and the president of China. In July 1998, Li took over as governor of Henan, the youngest provincial governor in China at the time.

He moved to the party’s big league, the Politburo Standing Committee, in 2007. In 2008, he was appointed China’s executive vice premier, and in 2013, became the premier, with Xi pipping him to the post of President.

As Li worked his way up the administrative echelons, he was known for his work in economic improvement and affordable housing, and his economic policy was dubbed ‘Likonomics’. According to the BBC, Li’s “economic policy of structural reform and debt reduction… aimed to reduce China’s dependency on debt-fuelled growth and steer the economy towards self-sustainability.”

A 2017 article from Forbes says about Li: “Within the current Politburo Standing Committee he is thought to keep the flame lit for the reform agenda, towards a larger role for the market in determining prices and allocating capital. He is also thought to favor internationalising the currency and opening up the capital market.”
However, as Xi’s star ascended, Li and ‘Likonomics’ increasingly faded.

What the removal now means

It is no secret that Xi wants to eliminate all rival factions within the party to cement his leadership, and for that, Li had to be cut to size. In the ongoing party Congress, Li’s remaining on the Standing Committee would have meant Xi’s control is not yet total and there is some fightback from within the party leadership. The scenes on Saturday seem to indicate that challenges to Xi are weakening.