US has moved to block China's access to chipmaking tools and designated Huawei, ZTE as national security threats. With the 5G rollout imminent, the tussle will not leave other countries, including India, untouched. 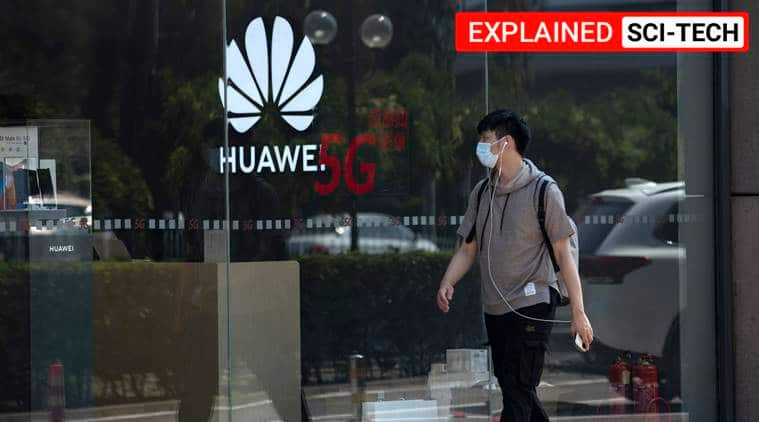 A man wearing a mask to curb the spread of the coronavirus walks past a Huawei store promoting 5G technologies in Beijing on Wednesday, July 15, 2020. (AP Photo: Ng Han Guan)

What began as a report by the US House Intelligence Committee flagging issues posed by Chinese telecom companies Huawei Technologies and ZTE nearly a decade ago, has evolved into a full-scale duel between the two global technology powerhouses, which now threatens to draw in the entire world.

While China has traditionally resisted allowing American big-data companies such as Facebook and Google to operate within its jurisdiction, there have still been significant dealings between the two countries on the technology side until now. Last year, Apple recorded $100 million of daily sales in China, while Huawei Technologies reported record revenues primarily from its exposure in western markets, including the US.

The latest US steps against Huawei mark the first real prohibitory action by a western government in the nearly two decades after the Shenzhen-based equipment major branched out to set up shop in Europe, and went on to become the mascot of Chinese technology prowess. A subsequent move by the UK to reverse an earlier decision and block Huawei from its 5G networks aligns with the US view — and marks an escalation of the Sino-American tech slugfest to beyond just these two countries.

A new set of US restrictions imposed on the use of chipmaking tools in May means Huawei could face shortages in its supply of specialist chips, an area where the Chinese are trying to build expertise through their homegrown contender SMIC (Semiconductor Manufacturing International Corporation, a publicly held semiconductor foundry company).

Globally, the concern is that the fresh wrangling could end up in cascading actions by other western countries — some of whom perceive the same threat as the US, and others who are wary of trade sanctions. This could have a bearing on the growing competition to dominate next-generation technologies such as 5G networks and artificial intelligence, and impact the plans of most countries preparing to transition to a 5G regime, including India.

How did the Chinese come to dominate the high-end hardware market?

Started in the late 1980s by a former Deputy Regimental Chief in the People’s Liberation Army, Huawei has come a long way from being a reseller of PBX switches imported from Hong Kong. Living up to its name — ‘Huawei’ comes from ‘zhonghua youwei’, a slogan that its founder claims he saw on a wall, roughly translating into ‘China has promise’ — the company went on to sell its products and services in more than 170 countries, blitzing past Ericsson as the largest telecoms equipment manufacturer in the world in 2012. It overtook Apple as the world’s second-largest manufacturer of smartphones in 2018, and had an annual revenue of $122 billion and some 194,000 employees last year. 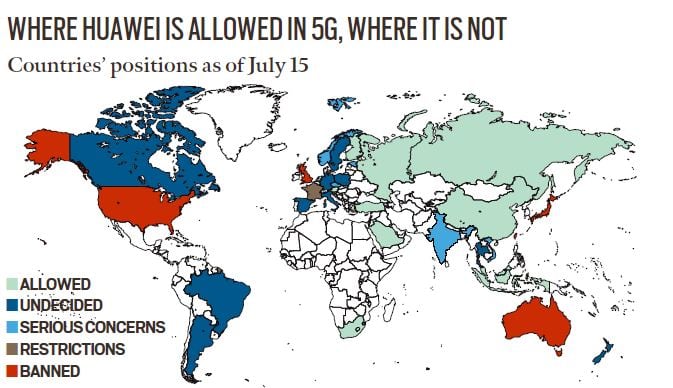 Where Huawei is allowed in 5G, where it is not

How could action against hardware makers develop into a tech cold war?

In February 2011, Huawei published an open letter to the US government denying the security concerns raised about the company or its equipment, and requesting a full investigation into its corporate operations. In response, the House Permanent Select Committee on Intelligence began an investigation in November 2011 into “the counterintelligence and security threat posed by Chinese telecommunications companies doing business in the US”.

In its report submitted in 2012, the House panel noted that “Huawei and ZTE cannot be trusted to be free of foreign state influence and thus pose a security threat to the United States”. Last month, the US Federal Communications Commission designated the two companies as national security threats.

Most observers see this as a ‘technological cold war’ that could extend beyond just the US and China, and compel other countries, including India, to effectively choose between one camp and the other. It is being described as a geopolitical struggle over technology that threatens to divide the world into two distinct technological blocs, with both countries striving to limit the other’s access to its advanced know-how.

While the US has blockaded Huawei on the ground that its equipment is designed to aid snooping and would make American telecoms players dependent on subsidised Chinese technology, the question is whether other countries think the risks are high enough to dump a cheaper, viable option. Many American and Chinese national flags are seen together. (Getty Images)

The former US Secretary of State Henry Paulson alluded to this nearly two years ago, at the end of 2018: “I now see the prospect of an economic Iron Curtain, one that throws up new walls on each side and unmakes the global economy as we know it.” The Huawei action could indeed signal the rising of a formidable new wall.

For China, the action has come at a time when 5G is set to be rolled out globally, with Huawei generally ahead in the race. For a lot of countries, a viable 5G rollout will need Chinese firms. But the 5G network in China relies on key components from the US — and the new American restrictions on the use of chipmaking tools mean Huawei could face shortages in the supply of specialist chips.

Where does India stand in this battle?

Back in December 2009, the Department of Telecommunications (DoT) had asked Indian mobile companies to suspend deals with Chinese equipment makers after fears that Chinese equipment were being used for hacking and spying. But India has been a fence-sitter since then — and has never fully banned Chinese companies from its telecom equipment industry. Indeed, much of India’s telecom growth story has been supported by Chinese companies in both hardware and software.

After the standoff in Ladakh, however, India has asked state-owned telecom service providers to exclude Chinese companies from the scope of their network upgrade contracts; this was part of the wider decision to signal curbs on Chinese investments and tech companies in the country. In official statements, India justified the ban on 59 mobile apps with Chinese links on grounds of a threat to national security. India’s hesitation in acting against Chinese equipment makers in the telecom industry has derived from the view that the Chinese have brought in a semblance of competitiveness to a market earlier dominated by pricier European firms such as Nokia and Ericsson — however, the border clashes and the US action could now force New Delhi into the anti-China camp.

Don’t miss from Explained | What is the €3.5 billion Wirecard scam? Visitors wearing masks to curb the spread of the coronavirus look at the latest products at a Huawei store in Beijing on Wednesday, July 15, 2020. (AP Photo/Ng Han Guan)

What are the implications for other stakeholders in the telecom industry?

Apart from the Chinese, the leaders in the telecoms network equipment market are the European players such as Ericsson and Nokia, and South Korea’s Samsung. While the computer and mobile chipmaking segment has players from across the world, including American companies like Intel, Qualcomm, and GlobalFoundries, and the British chip design company ARM, the US has tried to retain its control on this key aspect of communication technology that is otherwise dominated by just one major non-Western company — Taiwan Semiconductor Manufacturing Company.

In February 2018, President Donald Trump blocked a $117-billion attempt by Singapore-based Broadcom Ltd to acquire Qualcomm, citing national security concerns, leading to the company withdrawing its bid. GlobalFoundries, though based in California, is owned by the Emirate of Abu Dhabi.

With the Chinese being increasingly blocked by governments in 5G networks, other global players could be at a competitive advantage. Even in the US, small operators in rural parts of the country will no longer be able to access federal subsidies to buy or maintain Chinese equipment, and will be forced to deploy components by other manufacturers. This could have a bearing on how the global 5G rollout takes place, especially in the countries outside of North America and Europe, India included.