Cauvery water row: A dispute of the poor monsoon year

In the context of the Supreme Court order this week and the protests that have followed, Johnson TA explains the decades old disagreement between Karnataka and Tamil Nadu over the sharing of Cauvery waters. 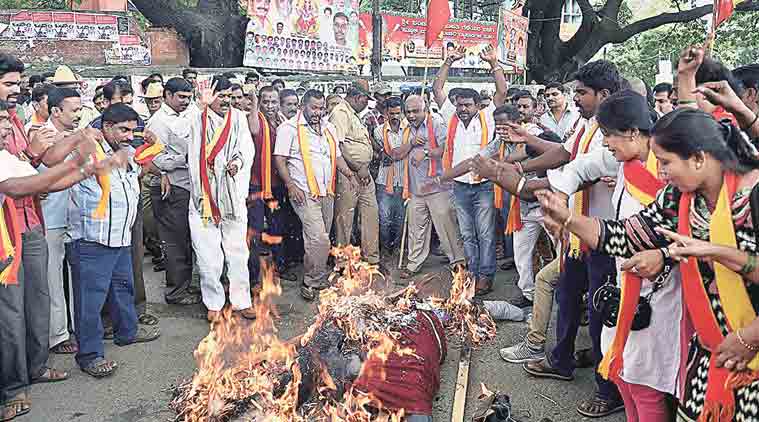 Protests broke out in Karnataka’s Cauvery basin area after the SC order; a bandh has been called on Friday.(Source: PTI)

In years when southern Karnataka gets its full quota of monsoon rain, generally not a whisper is heard about the Cauvery water dispute between Karnataka and Tamil Nadu. But when rains are less than bountiful in the catchment areas of the river, leaving four key Cauvery basin reservoirs less than full, trouble has always erupted over the sharing of water between the states.

This year, many parts of south Karnataka received rainfall 40% in excess of the normal — crucially, however, the main catchment area of the Cauvery in the Kodagu district got 33% below normal rain. The deficiency has meant that the four reservoirs in the Cauvery basin in Karnataka — Krishna Raja Sagar, Harangi, Hemavathi and Kabini — have together received only 114.66 thousand million cubic (tmc) ft of water until the end of August, about half the normal 215.70 tmc ft.

Amidst this shortfall in Karnataka, the government of Tamil Nadu, in an effort to protect the interests of farmers in the Thanjavur region — where paddy is grown over a vast area in the samba (August to January) season — went to the Supreme Court in August complaining that Karnataka had failed to adhere to the water release plan for a normal monsoon season outlined in the final February 5, 2007 order of the Cauvery Water Disputes Tribunal.

On September 5, the Supreme Court directed Tamil Nadu to approach the Supervisory Committee set up to adjudicate disputes arising over the sharing of Cauvery water in times of distress — but it also passed an interim order to release 15,000 cusecs per day for 10 days (around 12 tmc ft in all) to Tamil Nadu, given the plight of farmers there.

The interim order was along the lines of similar orders passed in previous distress years like 1995, 2002 and 2012. It has triggered massive protests especially in the Mandya and Mysore regions; farmers’ groups and pro Karnataka oufits have called a statewide bandh on September 9 to protest the order.

Why does the trouble continue despite the Cauvery Water Disputes Tribunal having issued its final award nine-and-a-half years ago?

The Tribunal’s order of February 5, 2007 gave 419 tmc ft of the total 740 tmc ft available in the Cauvery basin to Tamil Nadu, 270 tmc ft to Karnataka, 30 tmc ft to Kerala, and 7 tmc ft to Pondicherry. The remaining 14 tmc ft was accounted as reserved for environmental protection and outflow to sea. Karnataka has not accepted the award and has staked claim to 312 tmc ft. This case is currently before the Supreme Court. Tamil Nadu too has sought an increase in its allocation; the Supreme Court will hear the matter on October 18.

The tribunal also said Karnataka must release 192 tmc ft in a normal monsoon year (June to May) at the rate of 10 tmc ft in June, 34 tmc ft in July, 50 tmc ft in August, 40 tmc ft in September, 22 tmc ft in October, 15 tmc ft in November, 8 tmc ft in December, 3 tmc ft in January, and 2.5 tmc ft each from February to May at the Billigundlu water station in Tamil Nadu. The 192 tmc ft comprises 182 tmc ft from Tamil Nadu’s allocated share, and 10 tmc ft allocated for environmental purposes.

The problem in weak monsoon years arises because the Tribunal has not specified quantums and timelines for the release of water to Tamil Nadu when inflows into the Cauvery basin reservoirs in Karnataka are weak. The Tribunal has merely said: “In case the yield of Cauvery basin is less in a distress year, the allocated shares shall be proportionately reduced among the States of Kerala, Karnataka, Tamil Nadu and Union Territory of Pondicherry”, and left it to the discretion of the Supervisory Committee and its panel of experts to assess ground realities in the two riprarian states before arriving at a water release schedule in distress years.

So what exactly is the nature of the dispute this year?

On account of poor rainfall in the Cauvery catchment areas in Karnataka, water in the four main reservoirs in the area is 47% below the normal 215.70 tmc ft for the period upto the end of August. As a result, Karnataka, which was supposed to release 94 tmc ft by the end of August, released only 33 tmc ft. Tamil Nadu went to the Supreme Court demanding an additional 50.052 tmc ft at the Billigundlu station, pleading its farmers would be in distress otherwise. Karnataka told the court that Tamil Nadu should ideally approach the Supervisory Committee, but it nonetheless offered to release 10,000 cusecs of water for 6 days (around 6 tmc ft) as a goodwill gesture. The SC acknowledged Karnataka’s stand and referred the matter to the Supervisory Committee, but also directed it to release 15,000 cusecs to TN as an interim measure.

And how will the current squeeze on supply from the Cauvery affect the availability of water for drinking and irrigation in Karnataka and Tamil Nadu?

Given the adverse rainfall situation in the Cauvery basin and its catchment area, Karnataka has already told farmers there that they can cultivate only one crop this monsoon year. The government has also drawn up a staggered stop-start plan for water release in the Cauvery basin area in Karnataka — opening the gates for 10 days before shutting them for the next 10. “2.90 lakh hectares have been cultivated in the Cauvery basin this year. Even after releasing water to Tamil Nadu we have sufficient water to irrigate these crops by releasing water at 10-day intervals,” Chief Minister Siddaramaiah has said. According to government crop data, 0.69 lakh hectares had been cultivated in the Mandya region in the current year until August 29, compared to the 0.95 lakh hectares in the same period in 2015. “We need about 46 tmc ft of water for irrigation and 28 tmc ft to meet drinking water needs in Mysore, Bengaluru and Mandya till June 2017. We think we can manage with some additional rainfall in September and October,” Siddaramaiah has said.

With the major portion of rainfall for the samba crop being supplied by the northeast monsoon which arrives in October, Tamil Nadu too is likely to be able to ensure good samba crop yields despite the squeeze on supply from the Cauvery. The Cauvery water released at this time is expected to be stored in reservoirs in TN to serve as back-up in case the monsoon fails.

What legal steps are the two states taking now?

Tamil Nadu is expected to approach the Supervisory Committee over the next few days. Karnataka too will subsequently approach the Committee and seek a modification of the water release plan keeping in view the shortage of water in its Cauvery basin reservoirs. It will also try to get the water release plan modified, since it puts pressure on the state to release a large volume in August and September even if the monsoon fails to deliver fully.

The Committee is expected to decide on a water allocation plan for the current distress year. Both states will also seek more favourable orders in their appeals against the 2007 Tribunal order in the Supreme Court.