Explained: ‘Calcutta does not have a birthday’, but it has some markers of urbanisation

To claim that any city was “founded” on a specific day would mean dismissing early years of settlement. In the case of Calcutta, Charnock did not chance upon barren land because settlements predated his arrival. 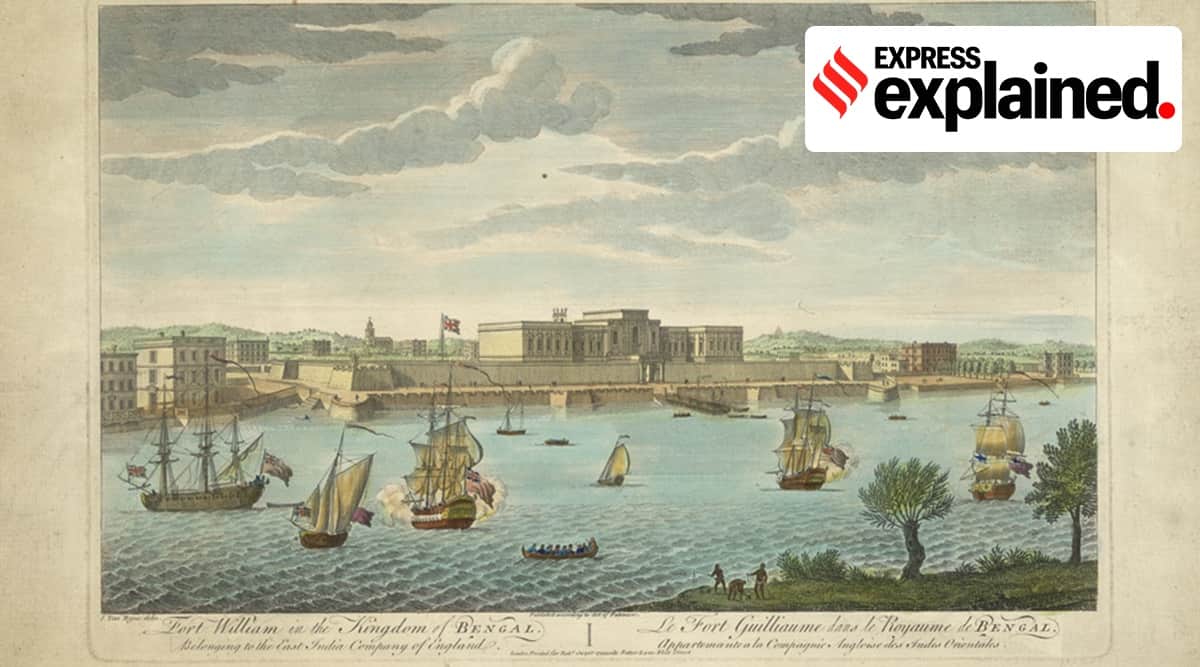 “Coloured engraving of Fort William in Calcutta by Jan Van Ryne (1712-60 published by Robert Sayer in London in 1754. Calcutta was founded on the mud flats of Hooghly River, a tributary of the Ganges, by the English merchant Job Charnock in 1690. After 1696, Fort William was constructed under the supervision of John Goldsborough. It was situated near the bank of the river. As we can see from this view, the building had two storeys and projecting wings. In 1757, an attack on the fort by the forces of Siraj-ud-Daulah, the Nawab of Bengal, led the British to build a new fort in the Maidan. The old fort was repaired and used as a customs house from 1766.” Photo courtesy: The British Library

A 2003 judgment by the Calcutta High Court should have settled any dispute that may have existed concerning the date of the birth of the city of Calcutta, but some two decades later, August 24 invariably generates discussion of the city’s age, its date of founding and Job Charnock, whom many credit for having “found” the city of Calcutta.

After months of deliberation, in what was considered to be a historic judgment, the Calcutta High Court had said that Charnock was not the founder of the city of Calcutta and directed the West Bengal government to stop associating Charnock’s name in this context, including removing textual references to it and to not celebrate August 24 as the city’s birthday. Very simply, the High Court had said, “Calcutta does not have a birthday”.

To claim that any city was “founded” on a specific day would mean dismissing early years of settlement. In the case of Calcutta, Charnock did not chance upon barren land because settlements predated his arrival.

“Historians don’t see a particular date (of founding) as very crucial because a city can’t grow in a day. It is true that Job Charnock came on a day and there are records of that and he decided that there would be a settlement here. But that was not the city,” says Partho Datta, professor of history at JNU and author of ‘Planning the City – Urbanization and Reform in Calcutta, c. 1800 – c. 1940’ (2017).

“The crucial question for me as an urban historian is, when does it take the contours of a city? A city means a lot of people staying together; there are institutions, government, there is economic activity, cultural activity. It is markedly not rural; there are urban attributes,” explains Datta.

Hence, from an urban history perspective, Calcutta’s story as one of the greatest cities of its time, doesn’t start from 1690, the year of Charnock’s landing. Datta believes that one of the most significant developments that gave the city a semblance of urban formation occurred in 1756 when the Nawab of Bengal Siraj ud-Daulah lay siege to Calcutta in retaliation for the British East India Company engaging in unauthorised development of the structure that is now known as Fort William. 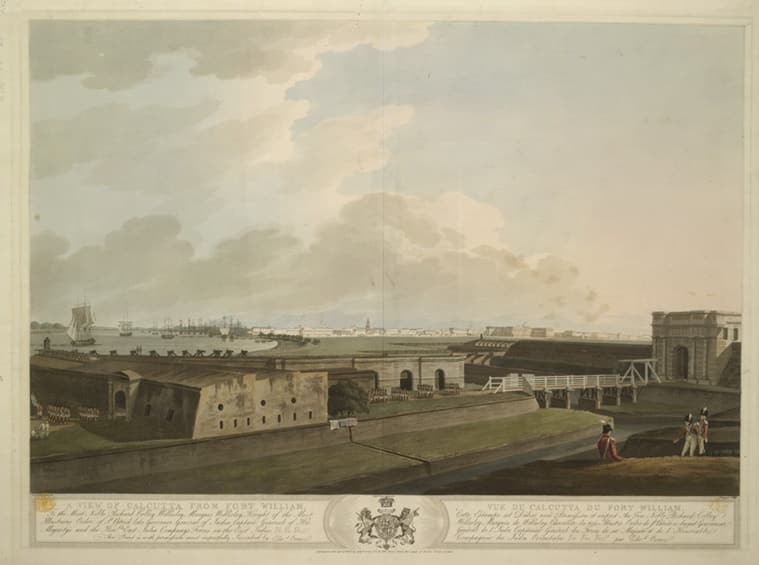 The East India Company was defeated in a decisive battle, making them realise the vulnerability of the fort. Dutta says that post 1757 when the fort was remade and fortified with enhanced protection, the construction was exceptionally well done. It was really this attack on Fort William, a bastion of the British and other Europeans living there, that changed the map of Calcutta. “The Europeans who used to primarily lived inside the fort—the European merchants, the administrators etc—started moving out. They knew that if there was an attack, there was infrastructure to save them. That is when places like Chowringhee, Esplanade were set up. That was European Calcutta, what we call ‘White Town’.

Simultaneously, while the fort was being rebuilt and fortified, there was another important development happening on the sidelines. The British East India Company had started an ambitious initiative for which they required a large number of labourers. “We have evidence that they recruited labourers, and quite deliberately went to surrounding districts, and even further to Bihar, Orissa, to recruit poor people seeking jobs. We have evidence that people migrated to build this fort,” explains Dutta.

To accommodate this planned migration of labourers, the British East India Company turned to a Muslim burial ground near Fort William, and set up what was known as ‘Coolie Bazaar’, where these labourers were given a place to stay while they worked on the construction of this fort, writes historian P. Thankappan Nair in his book ‘The Growth and Development of Old Calcutta, in Calcutta, the Living City’. “This started a process of migration from. what we call in urban history, the hinterland. So the poor who moved into the city also gave it its character,” explains Datta. The British Library says: “Handcoloured aquatint with etching of the south view of the Council House and Government House in Calcutta by William Baillie (1752/3-1799) plate 3 of his ‘Twelve views of Calcutta’ published in 1794. The old Government House, built in 1767, and the new Council House, built in 1764, were situated next to each other in Esplanade Row. The old Government House did not become the official residence of the Governor-General until 1773, but had been used by the Government before this date. This building was replaced by the new Government House in 1789, which was commissioned by Marquis Wellesley on his appointment as Governor-General of Calcutta and located on the same site. In 1800, the new Council House was also demolished.” (Photo courtesy: British Library)

The establishment of the Government House in 1767 and the Lottery Commission in 1817 were the other important developments in the city’s history that gave its urban landscape more defined contours. This commission was entirely responsible for the setting up of the city’s roads, streets and lanes. Some markers of urban settlements include planned roads, water supply and transport, and Datta says that the establishment of these in the early 19th century was responsible for making Calcutta the great city that it eventually became.

Following the establishment of the Lottery Committee, one of the most important urban development projects undertaken by the British East India Company included the laying down of the long stretch of road that is now called Bidhan Sarani in north Calcutta. “This is an attribute of a city, where you have a very important thoroughfare being laid down. Once this road was laid down, institutions began coming up on this road, like schools and colleges. It shows that urban social and cultural activity was happening. The city started getting character. It was no longer just a settlement,” explains Datta.

Along this axis, in the early 1800s, some of the city’s most important institutions were set up, like the Hindu College, that became Presidency College, Medical College and Hospital, and further up north, the Bhramo Samaj. “This whole debate of Calcutta being founded on a particular day according to me is not fruitful. It took a long time and some broad political, social, economic activities that happened in phases gave character to the city. That was how the city was founded—in phases,” Datta adds.

The markers that make an urban settlement a city only happened in the 19th century for Calcutta. When it eventually did, records show that it developed as one with a sizable population, to become one of the great metropolises of the 19th century, comparable to other European cities.

The British Library says “A hand-coloured print of a view of Calcutta from the ‘Fiebig Collection: Views of Calcutta and Surrounding Districts’, taken by Frederick Fiebig in 1851. Calcutta was established in 1690 by the British as a trade settlement and became the capital in 1772. It remained the capital city of the British Raj until 1912 when the capital was moved to Delhi. Before the arrival of the British, Calcutta consisted of three villages – Sutanuti, Gobindapur and Kalikata – that were along the east bank of the river Ganges.” (Photo courtesy: British Library)

The 2003 Calcutta High Court judgment was the result of a petition filed by the Sabarna Roychowdhury family, who had claimed ownership of a significant portion of the land that now forms Calcutta, challenging the official date of birth of the city, claiming that Charnock had arrived in Calcutta in 1676. City-based historian and co-founder of Immersive Trails, Tathagatha Neogi, says the connection of the Roychowdhury family to the discourse surrounding the ownership and history of Calcutta can be found in archives and deeds where rights over the land were handed over to the British East India Company. The three villages, Gobindapur, Sutanuti, Kalikata, that were combined to form Calcutta, were a part of the Khash land owned directly by the Mughal emperor, under whom the Sabarna Roychowdhury family were zamindars, Neogi says.

Advertisement
Streetwise Kolkata |Ezra Street: A reminder of the city’s rich Jewish past, and much more

In 1697, the transaction that happened between the Sabarna Roychowdhury family and the East India Company was not of the ownership rights, but rather the zamindari rights of these three villages, after which, the British became the next tax collectors for Mughal emperor Aurangzeb.

“This the Company misunderstood. Based on their knowledge of how landholding worked in England they thought that the zamindars, like English landlords, owned their lands, sometimes for generations and paid tax to the monarch. Because zamindari was translated as landlordship, the Company had assumed that the transaction on November 10, 1697 was a transfer of proprietary rights over these three villages. This misinterpretation would create problems later,” Neogi explains.

“It is this misinterpretation from where much of the debate surrounding the early urban history of Calcutta starts. The date, 1690, is a convenient marker. We shouldn’t discount that. This date is also important because it marks the start of British rule, especially since Calcutta was the diamond in the empire,” says Datta. “No city is built in a day; it is a long process. The question for any urban historian is what are the markers of any great city and how did they come about.”

Ganesh idols should be deposited at collection points for immersion: BMC