Delhi pollution: From late October onwards, meteorological factors and 'parali' burning add to the already high pollution base in the Indo-Gangetic basin. 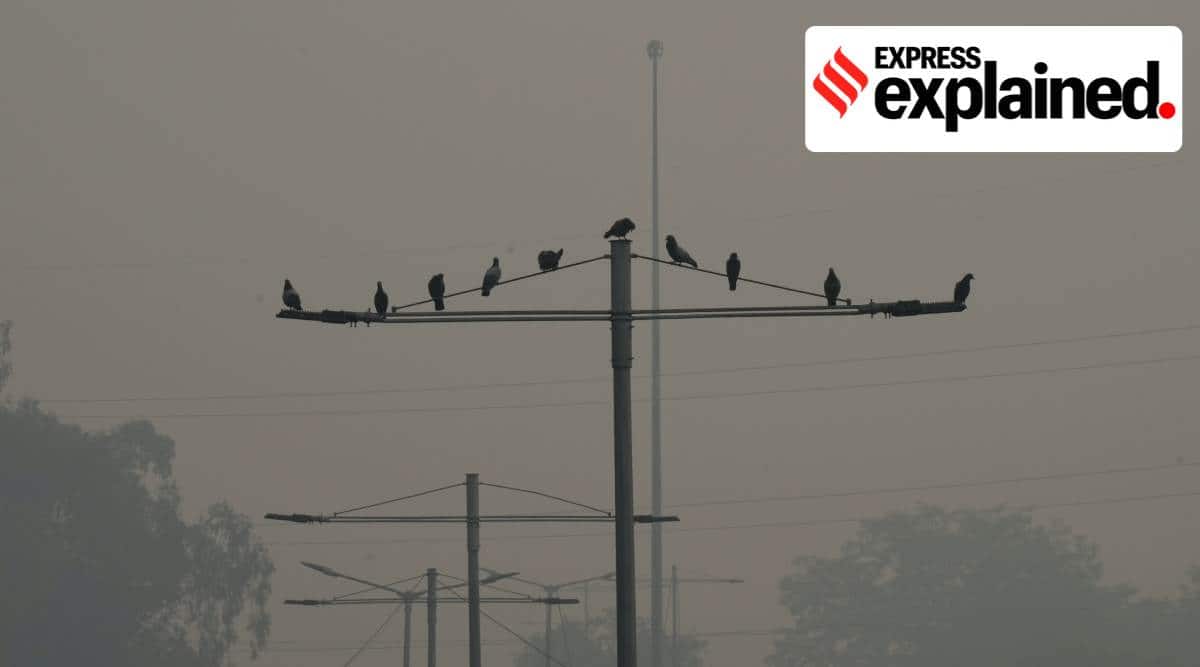 Birds perch on an electric pole, shrouded in a thick layer of smog, in New Delhi, Friday, Nov. 4, 2022. According to Central Pollution Control Board data, the overall Air Quality Index (AQI) of Delhi stood at 426 at 9.30 am in the 'severe' category. (PTI Photo)

It’s that time of the year again. The AQI across Delhi-NCR is going through the roof (it was 458 in the capital on Friday), stage 4 of the Graded Action Plan (GRAP) has kicked in, schools for junior classes have been shut, construction activities have been stopped, restrictions have been put on the plying of diesel vehicles, and steps like odd-even could follow.

Delhi Chief Minister Arvind Kejriwal, who has in previous years repeatedly blamed stubble-burning in Punjab for the air in the capital, on Friday pleaded for patience, asking, “if they stop farming, how will they feed their families?” Punjab now has an AAP government.

The question is, is it the burning of stubble that is fouling Delhi’s air?

Different studies show different things, but the best answer is, yes, to an extent, but not entirely. There is no simple — or simplistic — explanation for this phenomenon: air pollution in Delhi, and in fact the whole of the Indo Gangetic plains, is a complex phenomenon that is dependent on a variety of factors. The first and foremost is the input of pollutants, followed by weather and local conditions.

And what are these weather and local conditions?

Meteorologically, they are essentially, wind direction and the temperature of the air.

During the southwest monsoon, the prevalent direction of the wind is easterly. The winds travel from over the Bay of Bengal, carrying moisture and rainfall to this part of the country. Once the monsoon withdraws, however, the predominant direction of the winds changes to north-westerly. These winds carry particulate matter (essentially smoke and soot) from crop-burning in Punjab to the area above Delhi, and then onward down the Gangetic basin.

The fall in temperature also contributes to increased pollution levels. As it gets cooler, the inversion height — which is the layer beyond which pollutants cannot disperse into the upper atmosphere — comes down. When that happens, larger concentrations of pollutants in the air hang closer to the surface, and lead to worsening AQIs.

The point to note here is this: The direction of the wind is north-westerly in summer too, but it is the very high temperature over the Indo-Gangetic basin that ensures the pollutants that it brings (dust etc. from Rajasthan and sometimes Pakistan and Afghanistan) does not hang low.

Sachchida Nand Tripathi, professor at IIT-Kanpur and one of India’s most eminent experts on air quality and climate change, told the Idea Exchange programme of The Indian Express on Friday, “In summer, the ventilation is very strong; the land is so hot that pollutants rise high and dissipate… But in this season (October-November), the pollutants are like a lid sitting above the entire Indo-Gangetic basin like a lid, perhaps at a height of 1 km.”

Does Delhi’s geography and topography also have something to do with the pollution?

Yes. Geography plays a major role not just in Delhi, but in a good part of the Indo-Gangetic basin that extends from Haryana in the west to the middle of Bihar in the east, Prof Tripathi said.

This area is like a long valley surrounded by higher structures — a few hundred kilometres to the south of this plain is the elevation of the Malwa and Deccan plateaus, to the southwest lie the Aravalli mountains, and to the north are the Himalayas.

This topography makes the Indo-Gangetic plain similar to California, which is peculiarly susceptible to pollution, and to fight which governments over the decades have taken very strong measures against vehicular and other kinds of atmospheric pollution.

Within this area, Delhi itself is flanked by the Aravalli hills, which makes a good part of Delhi a “tabletop city”, Prof Tripathi said. This makes Delhi susceptible to critical pollution episodes created by a confluence of meteorological conditions, high vehicular pollution levels and topography. When all of these conditions come together, typically in the period from October to mid-December, pollution levels in the Indo-Gangetic basin go over the threshold.

Priyanka Chopra’s friends and family are keeping her well-fed in India. See photo