Har Ghar Nal Ka Jal is a cluster of four Bihar schemes. The common goal: easy access to clean drinking water with the larger aim of improving public health across the board. What started in 2015 as a poll promise by Bihar Chief Minister Nitish Kumar is now his government’s largest welfare initiative, both in terms of scale and reach.

Essentially, Har Ghar Nal Ka Jal is a cluster of four state schemes under various categories that were launched to provide clean drinking water through taps in urban and rural homes. The common goal: easy access to clean drinking water with the larger aim of improving public health across the board.

Under the scheme, drinking water is supplied for two hours each in the morning, afternoon and evening. And to implement this, work is allotted to contractors by the Public Health Engineering Department (PHED), and Panchayati Raj and Urban Development departments, through Standard Bidding Documents (SBDs).

For work under Panchayati Raj, where a panchayat committee has to implement the scheme, the project cost (for unfiltered water) is Rs 15-18 lakh, depending on the size of a ward and the number of households. At this level, the authority that holds the power of approval is a three-member panchayat committee headed by the mukhiya. At the state level, a team headed by the Panchayati Raj Secretary decides the amount to be allotted for a panchayat ward based on population. 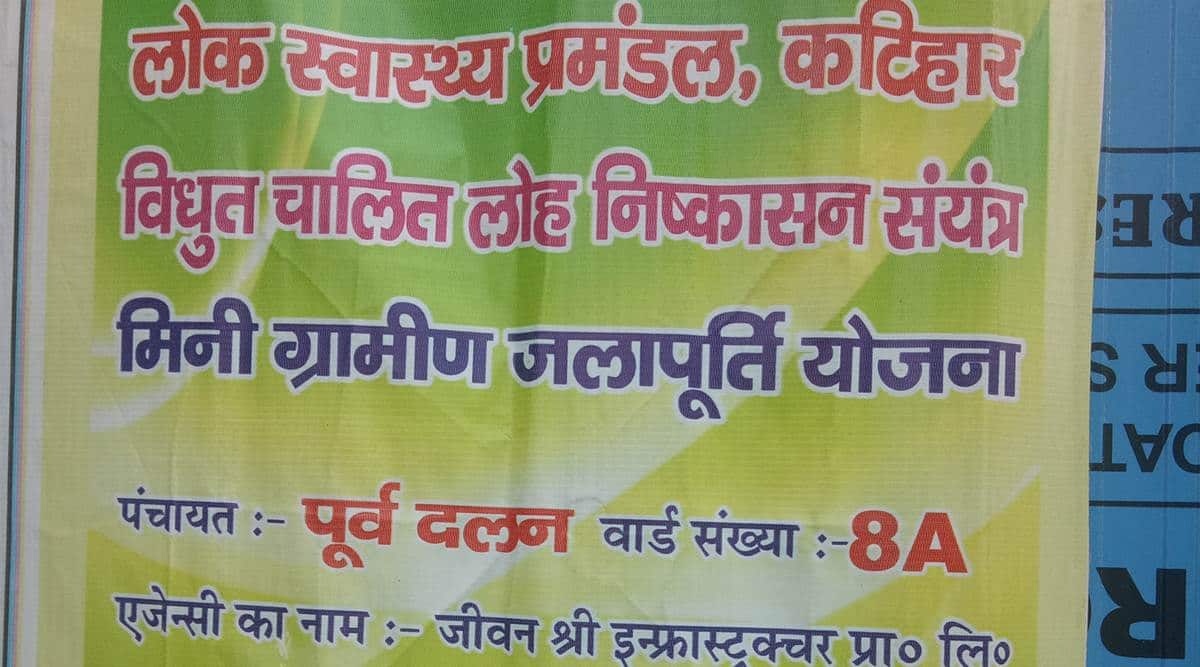 Har Ghar Nal Ka Jal is a cluster of four state schemes under various categories that were launched to provide clean drinking water through taps in urban and rural homes.

For the same volume for work, PHED disburses Rs 30-57 lakh, depending on water quality — the project cost is higher because of maintenance and filtering costs. This department, which implements a major chunk of the scheme, disburses 60 to 65 per cent of the contract amount to contractors during the course of work and 35 to 40 per cent in equal parts for maintenance over five years.

Each project involves setting up two ISI-marked plastic water tanks of 5,000 litres on an elevated (26-48 feet) iron platform called Jal Minar; pumping water from 300-400-foot-deep borewells maintained by a local operator; and, providing supply to a point nearest to the house entrance through plastic pipes and a brass tap.

Firms or individual contractors who win the bid have to maintain the project for five years. A ward usually has 100-250 households, and one household can get one or more tap connections according to the number of Aadhaar cards produced. Any misuse, such as the water being used for other purposes, can attract fines of Rs 350 for the first offence, Rs 400 for the second and Rs 5,000 for the third, followed by disconnection of supply.

According to several officials and contractors, projects under PHED and Urban Development Department are sought after since they involve tenders for multiple wards that are usually at least four times the cost of those awarded at the panchayat level.

The norms specify that in each of these contracts, there have to be at least two bidders. However, in the case of a re-tender, a single bid is enough. This provision, officials and contractors say, is a key factor that has led to the process being compromised.

“When it is decided that a certain person has to be awarded work, no one bids in the first tender. In the re-tender, the favoured person emerges as the single bidder and gets the contract,” said a contractor, who has bagged contracts in three districts.

“Another method involves the favoured person and his or her dummy company or contractor taking part as the two bidders in the first tender. Other contractors are given some money and promised contracts in the next lot,” said a contractor from Bhagalpur.

Incidentally, the SBDs of Jeevanshree Infrastructure Pvt Ltd, in which Bihar Deputy Chief Minister Tarkishore Prasad’s aide Prashant Chandra Jaiswal is a director, show that 21 contracts in one consecutive series (SBDs No.137-157) and 10 in another (SBDs No. 315-324) were awarded to the company in Katihar in 2019-2020.

At least 12 contractors from different districts told The Indian Express that in most cases, the PHED executive engineer calls the shots. “All prospective bidders are told about who will get the contract. Other bidders are asked either to abstain or quote higher rates to get disqualified,” said a contractor.

According to a PHED contractor from the Seemanchal region, it is a “standard rule to give four per cent commission to the PHED department before start of work” and “this can go up to 10-11 per cent till completion”. The contractor said the commission is allegedly divided among officials, “right from junior engineers to executive engineers and chief engineers” — and are “direct cash transactions”.

When contacted, Bihar PHED Minister Ram Prit Paswan acknowledged that there have been “complaints about some engineers awarding contracts to their favourites”. PHED Secretary Jitendra Srivastava said that action would be taken if irregularities are detected in the award of contracts.

9-year-old’s rape-murder: Accused sexually assaulted her in the past too, say police