Explained: Why is UK’s Big Ben tower being restored, and what are its new features?

The Big Ben conservation project came a step closer to completion on September 6 when the hands of the clock were restored to their original Prussian blue colour. In central London, standing tall at 316 feet or 96 metres, is a clock tower nicknamed ‘Big Ben’. It was originally called the Clock Tower and then St Stephen’s Tower, before it was finally changed to the Elizabeth tower in 2012 after Queen Elizabeth II. It houses a great bell and a striking clock.

Big Ben is an iconic landmark in the city, and among the top tourist attractions.

The tower was completed in 1859 and came to be the largest and most accurate in the world. The bell, which is named ‘Big Ben’, was the largest in the United Kingdom for 23 years.

A history of Big Ben

Since the 1290s, a clock tower has stood at the site of Big Ben. It has always been an extension of the Palace of Westminster, a complex which houses the Parliament of the United Kingdom.

In 1834, a fire destroyed the Palace of Westminster. It was then reconstructed in the 1840s by architect Charles Barry, who hired Augustus Welby Pugin to execute his design of Big Ben.

Construction of the tower began in 1845 at the north end of the Palace of Westminster. Pugin built it in a neo-Gothic style from the inside out, meaning the people of London seldom saw workers or materials during construction.

He used bricks to build the tower, covered with sand-coloured Anston stone. It was topped with a two-tier iron spire. Inside, there was a winding staircase in one corner, an air shaft to bring fresh air into the palace, and a weight shaft for the clock in the centre. At the base is a prison, which was meant for unruly MPs. 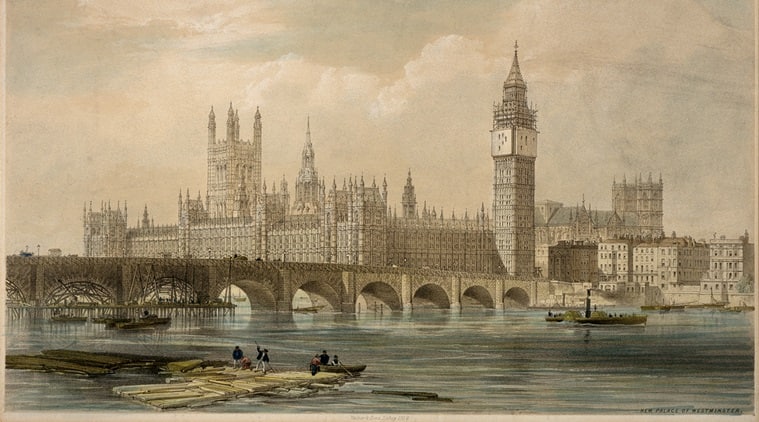 The design of the clock was a big challenge. Until then, time was never accurate as it was measured by the sun. However, according to government documentation, the Astronomer Royal wanted the most accurate turret clock in the world and specified that it should be accurate to within one second when striking the hour.

To carry this out, a great bell was built with four small quarter bells. Every 15 minutes, a quarter bell chimes, and the great bell strikes every hour. When it is struck, Big Ben chimes out the note ‘E’. The four smaller bells in the tower strike ‘G sharp’, ‘F sharp’, ‘E’ and ‘B’.

If a person stands at the bottom of Big Ben's tower with a portable radio and listens to the chimes live on radio, they will hear the peals on the radio first before hearing them from the tower. This is because radio waves travel at the speed of light, as does the signal from the Big Ben microphone to the radio station. Sound itself travels at a measly speed of 0.3km per second.

In 1892, the Ayrton Light was installed at the top of the tower. It can be seen across London, and signals when Parliament is in session after dark. It is said it originally shone towards Buckingham Palace so Queen Victoria (1837-1901) could see if lawmakers were working.

Big Ben has gone silent on several occasions, mostly due to repair work, but also during the World War II when it became a liability. Why is Big Ben being restored, and what are its new features?

In 2017, the government announced it would undergo a four-year restoration process, “from the gilt cross and orb at its tip to the bottom of its 334-step staircase”. It is the largest and most complex conservation project in the tower’s history.

“Parliament is restoring the clock tower to its former glory, as well as modernising and upgrading facilities to make it fit for the 21st century. This is vital to ensure that this iconic building, situated on a UNESCO World Heritage site, is safeguarded for future generations to visit and enjoy,” the government said.

So, what is changing? To begin with, the tower suffers from crumbling stones, rusty ironwork, leaking roofs and an aging clock. The 80 million pound ($111 million) restoration project will see the tower being repaired, redecorated, improved for health and safety systems and made energy efficient. A lift will be installed for better access for maintenance and emergency services, as well as a toilet and kitchen.

So, when will Big Ben chime again?

This means, Big Ben, which last chimed on August 21, 2017, will next be sounded only at its unveiling next year. The bell’s chiming was paused to ensure the safety of those working in the tower. Since 2017, a temporary striking mechanism has been installed to ring on Remembrance Sunday and New Year’s Eve.