Explained: Before Mamata, recalling when Jayalalithaa refused to send IPS officers to the Centre

While declining the Centre’s demand Jayalalithaa had said, like Mamata said on Saturday, that there was already a dearth of good officers in the state, which needed those officers. 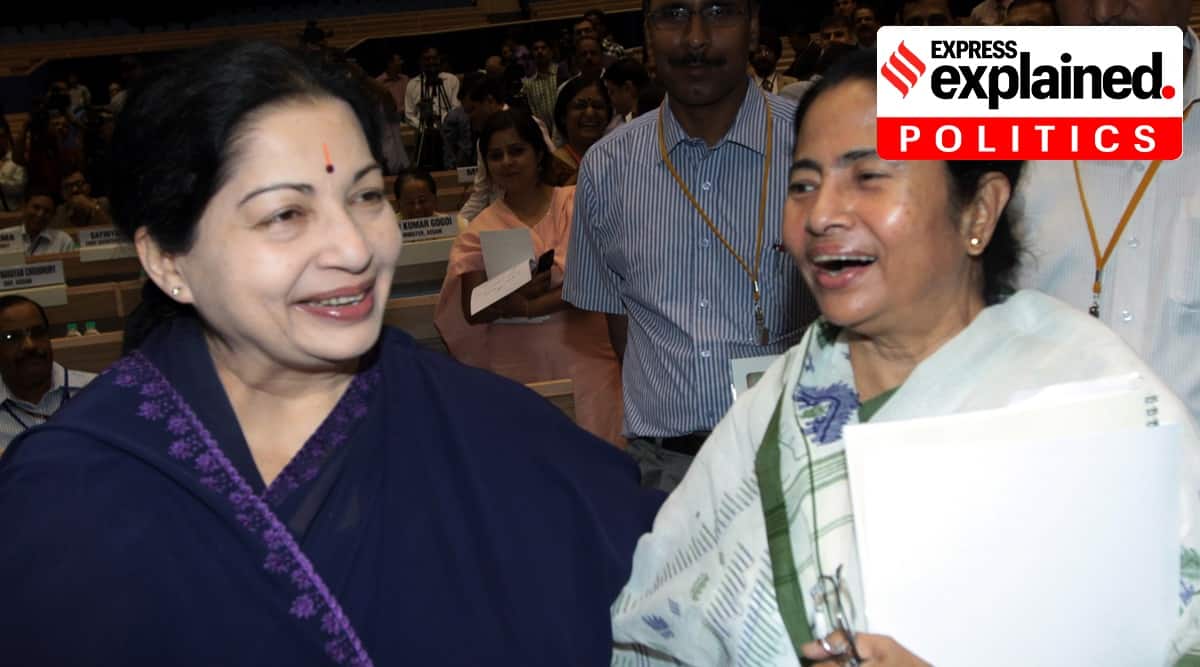 Jayalalithaa and Mamata Banerjee in New Delhi in 2012. (Express Archive)

In the Mamata Banerjee-led West Bengal government’s refusal to send three IPS officers on central deputation, there is an echo of a similar refusal by then Tamil Nadu Chief Minister J Jayalalithaa in 2001.

In the current instance, the Centre has asked for the three IPS officers to be sent on deputation with the Government of India following an attack on BJP president J P Nadda’s motorcade outside Kolkata; these officers were in charge of security. In its refusal, the West Bengal government has cited a shortage of IPS officers (The Indian Express, December 13).

Jayalalithaa took oath as Chief Minister on May 13, 2001. On the night of June 29-30, Tamil Nadu police’s CB-CID raided former Chief Minister M Karunanidhi’s home and arrested him along with his DMK colleagues Murasoli Maran and T R Baalu, then ministers in the NDA government of A B Vajpayee.

It resulted in the removal of Governor Fathima Beevi, as the Centre was not happy with her report. Then Law Minister Arun Jaitley said the report did “not reflect the true situation in Tamil Nadu today” and that the Governor had “wholly failed to discharge her constitutional obligations”.

Three IPS officers were identified as involved in the raid: then Chennai Police Commissioner K Muthukaruppan, Joint Commissioner Sebastian George, and Deputy Commissioner Christopher Nelson. Considered close to Jayalalithaa, all of them have since retired. After retirement, Nelson was appointed as Member of the State Planning Commission, and later as the state Information Commissioner.

As is happening now, the Home Ministry, then under Lal Krishna Advani, had asked the Tamil Nadu government to relieve the three officers for central deputation. Jaitley had said the Centre had “overriding powers” in the transfer of IPS officers. The decision was taken in a meeting of the Union Cabinet, and Attorney General Soli Sorabjee was asked to cut short a London trip to attend it.

Jayalalithaa then, like Mamata Banerjee now, refused to spare those officers. She wrote to other Chief Ministers for their support to protect the rights of the states. She wrote about the “disturbing trend” in the management of the state cadres of All India Services and Centre-State relations. While declining the Centre’s demand she had said, like Mamata said on Saturday, that there was already a dearth of good officers in the state, which needed those officers. 📣 Follow Express Explained on Telegram

What the rules say

For the premier civil services — IAS, IPS and Indian Forest Service — officers of the state cadre are allotted by the Centre from a pool of officers. From time to time, a certain number of officers are sent on central deputation. The Home Ministry is the authority in control of IPS cadre, the Department of Personnel and Training for the IAS cadre, and the Ministry of Environment, Forest and Climate Change for IFS cadre.

Muthukaruppan told The Indian Express on Sunday, “I cannot comment on what the central government can do against the West Bengal officers, but we approached CAT (Central Administrative Tribunal) which stayed the Home Ministry order. None of us tried for central deputation since 2001. There was no other action by the central government against us.”

The Centre can take no action against civil service officials who are posted under the state government. Rule 7 of the All India Services (Discipline and Appeal) Rules, 1969, states that the “Authority to institute proceedings and to impose penalty” will be the state government if the officer is “serving in connection with the affairs of a State, or is deputed for service under any company, association or body of individuals, whether incorporated or not, which is wholly or substantially owned or controlled by the Government of a State, or in a local authority set up by an Act of the Legislature of that State.” For any action to be taken on an officer of the All India Services (IAS, IPS, IFS), the state and the Centre both need to agree.

Under the Home Ministry’s deputation policy for IPS officers, “if an officer on offer is selected for a Central posting and does not report either on his own or at the instance of the State Government, he would be debarred for consideration for a post under the Government of India for a period of five years. Officers, who have already been debarred, should not be offered before the debarment period is over.” Being debarred from central deputation, however, hardly bothers an official if they prefer to work in their state.

Another episode, in February last year, was a pointer to the Centre’s limitations in acting against All India Service officers. The Home Ministry had written to then Chief Secretary Malay Kumar De calling for action against five officers, including DGP Virendra, for allegedly taking part in a dharna organised by the Trinamool Congress. The state government, however, said no officer had taken part in the dharna.