Explained: The AUKUS agreement to equip Australia with n-subs, and why it has upset France

Canberra has ditched an earlier contract with a French company to join hands with the US and UK to build potential military deterrence against China in the Pacific region. 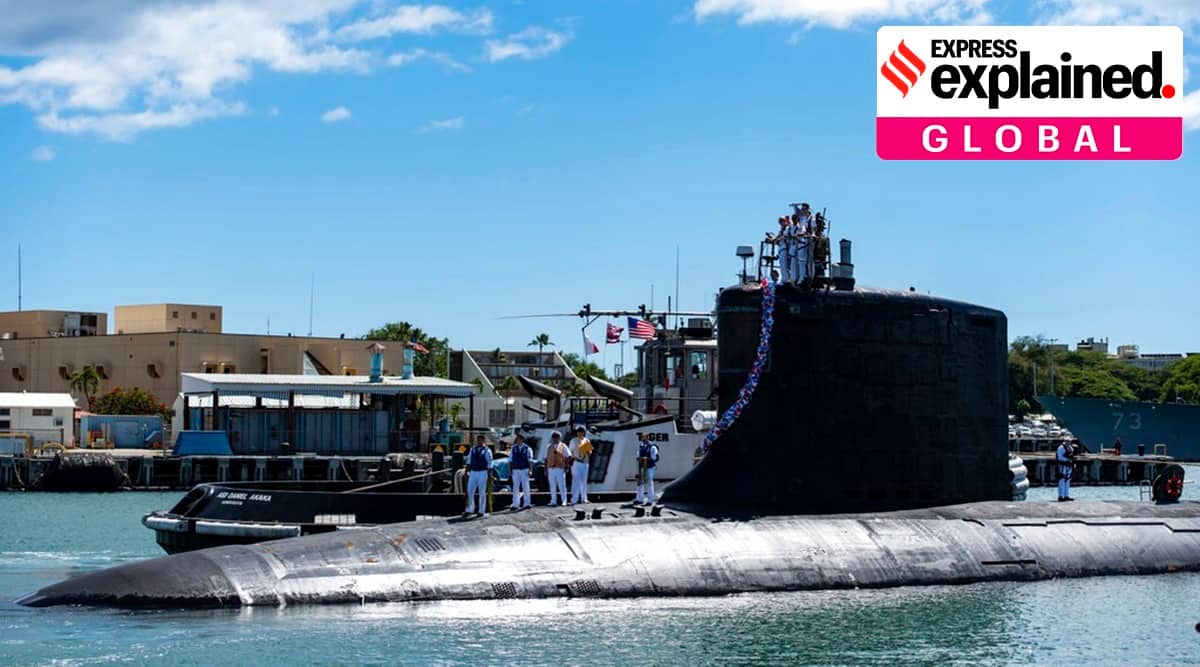 In this photo provided by U.S. Navy, the Virginia-class fast-attack submarine USS Illinois (SSN 786) returns home to Joint Base Pearl Harbor-Hickam from a deployment in the 7th Fleet area of responsibility on Sept. 13, 2021. (AP Photo)

The United States, United Kingdom, and Australia announced a new defence deal on Thursday (September 16), under which America and Britain will help Australia deploy nuclear-powered submarines in the Pacific region.

Although the leaders of these three countries did not say so, the deal is seen as a step towards curtailing China, which has made significant aggressive manoeuvres in the Pacific region, especially in and around the South China Sea, where it has expansive territorial claims.

Only in Express |Days before Quad, Australia, US, UK join hands to counter China

Why are nuclear submarines such a big deal, and why is this new pact significant? Also, why has France said that it has been “stabbed in the back” by Australia?

What is the agreement announced on Thursday?

Australia’s Prime Minister Scott Morrison said that the “new enhanced trilateral security partnership between Australia, the United Kingdom, and the United States”, named “AUKUS”, will be a “partnership where our technology, our scientists, our industry, our defence forces are all working together to deliver a safer and more secure region that ultimately benefits all”.

The first major initiative of AUKUS, Morrison said, would be to deliver a nuclear-powered submarine fleet for Australia. “Over the next 18 months, we will work together to seek to determine the best way forward to achieve this. This will include an intense examination of what we need to do to exercise our nuclear stewardship responsibilities here in Australia,” he said.

The nuclear-powered submarines will give Australia naval heft in the Pacific, where China has been particularly aggressive. While the US and Britain have had the capability for decades, Australia has never had an n-sub.

Biden participates in a videoconference with Morrison and Johnson, from the White House in Washington on Wednesday, September 15, 2021. (Doug Mills/The New York Times)

China has nuclear-powered submarines, as well as submarines that can launch nuclear missiles. The three signatories to the AUKUS deal have made it clear though, that their aim is not to arm the new subs with nuclear weapons.

China has been one of Australia’s biggest trading partners, but the relationship has soured over the last few years. It was in consideration of Chinese sensibilities that Australia had pulled out of the Malabar Naval Exercise with the US, India, and Japan after participating in the 2007 edition (of which Singapore too, was part). Australia came back to Malabar in 2020, which marked the first time in 13 years that the navies of the four Quad nations war-gamed together.

But why is Australia getting nuclear submarine capability being seen in the context of possible military aggression involving China?

This is primarily because a nuclear-powered submarine gives a navy the capability to reach far out into the ocean and launch attacks.

Unlike conventional submarines, which are generally considered helpful for defensive purposes, the ability of a nuclear-powered submarine to go long distances, at a higher speed, without being detected gives a nation the ability to protect its interests far from its shores.

In the context of the AUKUS agreement, nuclear-powered submarines will give the Royal Australian Navy the capability to go into the South China Sea, where China is increasingly getting aggressive, to protect its assets and conduct patrols — even though this has not been spelt out by the three countries.

The US has in the past shared its nuclear propulsion technology only with the UK, in accordance with the nuclear power sharing arrangement that the two countries have had since 1958. What makes nuclear submarines so important?

Conventional diesel-engine submarines have batteries that keep and propel — though not very fast — the vessel underwater. The life of these batteries can vary from a few hours to a few days.

The newer Air-Independent Propulsion (AIP) submarines have additional fuel cells that allow them to stay underwater for longer and move faster than the conventional vessels. However, the fuel cells are used only at strategic times, when the endurance to remain submerged is required.

Both conventional and AIP subs need to come to the surface to recharge their batteries using the diesel engine. The diesel engine also propels the vessel on the surface. However, the fuel cells of AIP can only be charged at on-land stations, not while at sea.

The great advantage of an SSN is that its nuclear-powered propulsion gives the submarine a near infinite capacity to stay dived. Since it is propelled by a nuclear-powered engine rather than by batteries, it does not have to emerge on the surface at all, except to replenish supplies for the crew.

SSNs are also able to move faster underwater than the conventional submarines. Added together, these advantages allow a navy to deploy these submarines quicker and at farther distances.

So why is France unhappy about Australia getting these submarines?

The deal has complicated the relations between France and Australia, and also France and the US. The French Foreign Minister Jean-Yves Le Drian has called it a “stab in the back”. There is a history to this.

Back in 2016 — when Le Drian was President François Hollande’s defence minister — Australia had signed a contract to buy 12 Attack-class submarines from the French shipbuilder Naval Group worth nearly $ 90 billion. The defence and foreign ministers of Australia had “reconfirmed” the deal to France just two weeks back, Reuters reported.

Le Drian told France Info radio on Thursday: “It’s really a stab in the back. We had established a relationship of trust with Australia, this trust has been betrayed…”

He added that he had spoken to his Australian counterpart recently, and had received no indication of what was coming. Le Drian was quoted as saying that he was “angry and very bitter about this break up”.

The French minister also said that his country was not going to let the Australians get away with ditching the contract, which can be expected to lead to some job losses as well.

“This is not over,” he was quoted as saying in a report in Politico. “We’re going to need clarifications. We have contracts. The Australians need to tell us how they’re getting out of it. We’re going to need explanation. We have an intergovernmental deal that we signed with great fanfare in 2019, with precise commitments, with clauses, how are they getting out of it? They’re going to have to tell us. So this is not the end of the story,” Le Drian said.

The New York Times said in its report that while the France-Australia submarine deal had collapsed, “a harsh legal battle over the contract appears inevitable”.

The French minister also attacked the United States, saying the move by the Biden administration was something that the President’s unpredictable predecessor Donald Trump might have been expected to do.

“What concerns me as well is the American behaviour,” the Politico report quoted him as saying. “This brutal, unilateral, unpredictable decision looks very much like what Mr Trump used to do… Allies don’t do this to each other… It’s rather insufferable.”

In a joint statement reported by The Guardian, Le Drian and the French Defence Minister Florence Parly said: “The American decision, which leads to the exclusion of a European ally and partner like France from a crucial partnership with Australia at a time when we are facing unprecedented challenges in the Indo-Pacific region, be it over our values or respect for a multilateralism based on the rule of law, signals a lack of consistency which France can only notice and regret.”

The deal between France and Australia had been marked by delays and other issues. The first submarine was expected to be operational around 2034.

The Americans, Britons, and Australians did not immediately react to the French outrage. Announcing the AUKUS deal during a three-way video conference with President Joe Biden and Prime Minister Boris Johnson of the UK earlier, Prime Minister Morrison made no mention of France or the 2016 deal. France is also outraged that it was not even informed or consulted about the decision and the new agreement before they were announced. 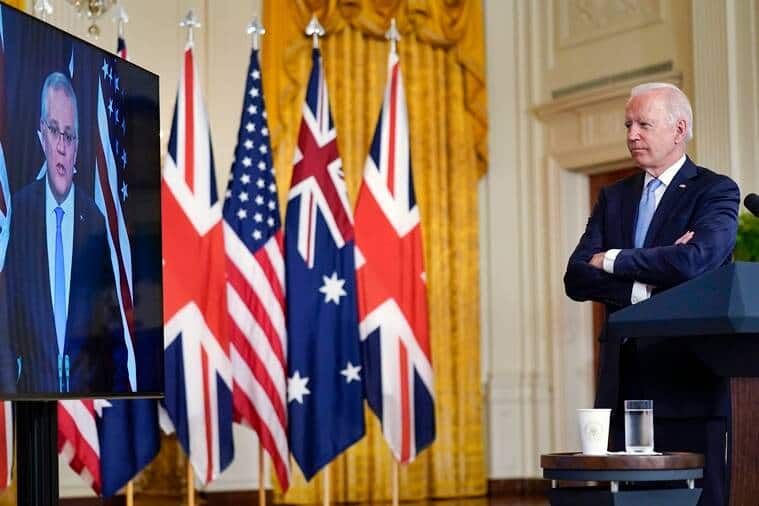 President Joe Biden, listens as he is joined virtually by Morrison and Johnson, at the White House in Washington, Wednesday, Sept. 15, 2021. (AP Photo)

Does India have nuclear-powered submarines?

Yes, India is among the six nations that have SSNs. The other five are the US, the UK, Russia, France and China.

India has had the capacity since it got the Soviet-built K-43 Charlie-class SSN in 1987. Commissioned with the Red Fleet of the USSR in 1967, it was leased to the Indian Navy, and was rechristened INS Chakra. The submarine was decommissioned in 1991.

In the mean time, India was working on building its own SSN, and the first Indian nuclear submarine, the INS Arihant, was commissioned in 2016. A second Arihant-class submarine, INS Arighat, was secretly launched in 2017, and is likely to be commissioned soon.

After it demonstrated the capability to launch nuclear weapons in 2018, the INS Arihant is now classified as a Strategic Strike Nuclear Submarine or SSBN, which means it is a nuclear-powered ballistic submarine.

INS Arihant is important because it completes India’s nuclear triad, which means that the country has the capacity to launch nuclear missiles from land, aircraft, and submarine.

Xiaomi 11 Lite NE 5G is coming to India on September 29: What we know