Explained: A likely Congress-AIUDF alliance, and how it might change Assam politics

A Congress-AIUDF alliance for the upcoming Assam Assembly elections early next year is expected to be officially announced soon. The formation can give rise to new political contours in the state. 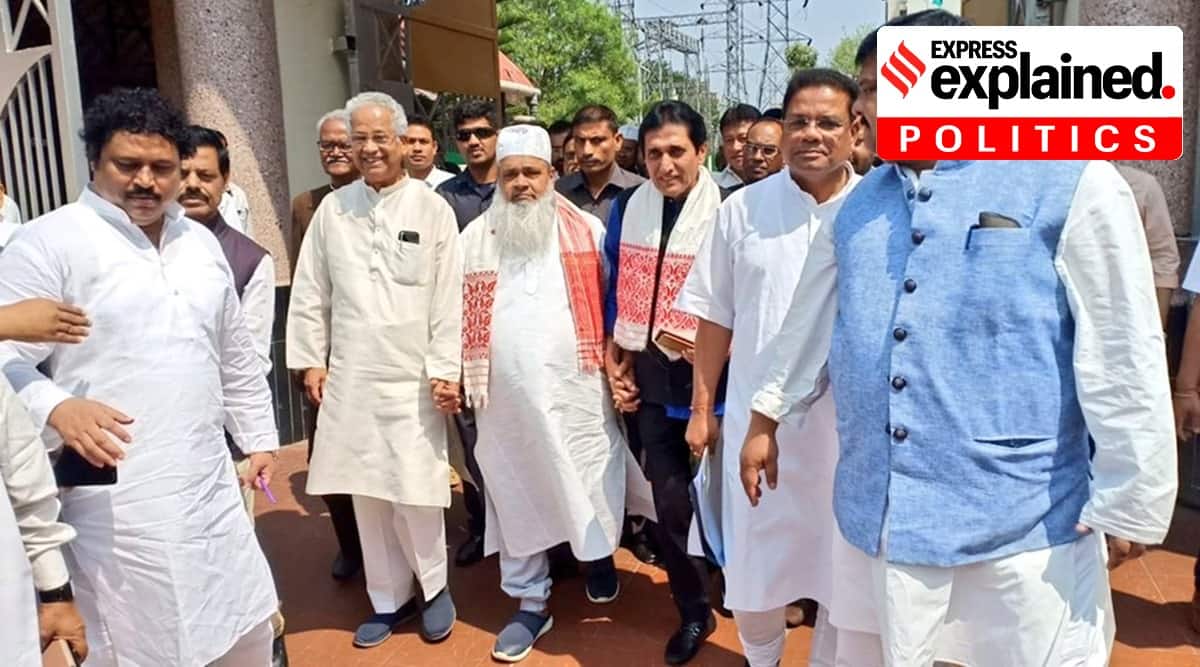 Tarun Gogoi and Badruddin Ajmal walk hand-in-hand outside the Assam Assembly after filing the nomination of their joint candidate, senior journalist Ajit Kumar Bhuyan, for the Rajya Sabha elections. (Twitter/@ripunbora)

In the run-up to the 2006 Assam elections, then Chief Minister Tarun Gogoi of the Congress had infamously asked “Who is Badruddin?” The previous year, perfume baron Badruddin Ajmal had floated a new party called All India United Democratic Front (AIUDF) ,which was contesting elections for the first time then.

Ajmal’s party captured a large support base among Muslims of Bengali descent, and won 10 seats out of the total 126 in the Assam Assembly in that election, and became a force to reckon with.

Gogoi and Ajmal walked out hand-in-hand from the state Assembly after filing the nomination of their joint candidate, senior journalist Ajit Kumar Bhuyan, for the Rajya Sabha elections. Bhuyan won, along with two others supported by the BJP-led alliance.

Now, a Congress-AIUDF alliance for the upcoming state elections early next year is expected to be officially announced soon. The formation can give rise to new political contours in the state.

Why is this probable alliance a new thing?

Veteran Congress leaders like Gogoi have over the years said that the AIUDF was a “communal” party and a “B team of the BJP”, fielding candidates to eat away the Congress vote. The position of senior leaders of the state Congress earlier was that in Assam, which is fragmented by raging identity issues, any alliance with the AIUDF might be perceived as communally polarising, thereby helping the BJP.

The BJP has previously alleged a secret Congress-AIUDF pact in Assam multiple times, even though the Congress has always denied it vehemently before the alliance for the RS seat earlier this year.

Although there have been murmurs about an alliance in the past, never has never been an official pact. Ripun Bora chairs a meeting with the Assam Congress core committee on August 18, 2020. Senior leader Tarun Gogoi is pictured sitting next to him. (Twitter/@ripunbora)

What is the alliance being planned now?

In an interview to The Indian Express on Thursday, Ripun Bora, president of the state unit of the Congress and Member of Rajya Sabha, said, “Anyone who wants the BJP’s ouster, we appeal to them to join us. We will form an anti-BJP political front and we appeal to the Left, the AIUDF, and all others with whom our agenda to oppose the BJP matches.”

Bora explained that in the 2016, the BJP fought in coalition with AGP, BPF, and other groups representing ethnic communities. ”We had fought alone then — this time, we will fight in an alliance,” he said.

Aminul Islam, general secretary of AIUDF, told The Indian Express, “We have to forget differences of the past, and work towards securing the future of the Assamese people and Assam through a common minimum program. We are hoping that Akhil Gogoi-led Krishak Mukti Sangram Samiti, the Left parties, and the new front launched by Ajit Bhuyan, will come with us.”

Also in Explained: Who is Assamese? A proposed definition, and several questions

What has changed now?

According to Congress insiders, the protests against the Citizenship (Amendment) Act (CAA) that swept the state earlier this year has changed the situation. The protests saw the entire political opposition to the BJP in the state voice the same concerns.

The 1985 Assam Accord set a cut-off of midnight of March 24, 1971, for the detection of “illegal foreigners” in Assam — the NRC in Assam uses the same cut-off. According to the Opposition and socio-political groups in Assam, provisions of the CAA violate the Assam Accord by extending the cut-off for accepting non-Muslim migrants up to December 31, 2014.

State Congress chief Bora said, “The AIUDF believes in the Assam Accord and supports its implementation. The AIUDF is against the CAA. They are in the interest of the people of Assam. They are not communal — they are not anti-Hindu, but the BJP is anti-Muslim. Of course, they are working for the community they represent, and that is not a crime. Assam’s problem is not the AIUDF — the problem is the misrule by the BJP and we will fight to end this misrule.”

Congress spokesperson Rhituporna Konwar said, “Before the CAA, the situation was different. But after CAA, we need a grand alliance of parties and groups that believe in the Assam Accord, and which are opposed to the CAA and the BJP.”

Konwar added: “We believe in the Assam Accord. It is a Magna Carta for us. We believe that 1971 should be the cut-off for determination of foreigners in Assam — and not 2014 as the CAA has imposed on us. The AIUDF also believes in the Assam Accord. To protect the interests of Assam, we have decided to ally with all those who are opposing the BJP’s divisive policies.” According to Congress insiders, the protests against the Citizenship (Amendment) Act (CAA) changed the situation. (Express Photo/File)

How does the Congress see the alliance working?

According to Konwar, the alliance could affect the BJP in several seats by negating the chances of a division of votes.

Moreover, according to Konwar, the Left parties wield influence in at least 7-8 seats in the state, and if the Left is in the alliance, the BJP would find it difficult in those constituencies.

But won’t the alliance pose a perception problem for the Congress?

Both Bora and Konwar deny it, highlighting that they would seek votes based on their belief in the Assam Accord and opposition to the CAA.

Another senior Congress leader, speaking on the condition of anonymity said, “There might be some problems, of course. But we have to make people understand. Our politics should be to save the ‘Axomiya’ identity and not follow the politics of Hindtuva.”

How does the BJP see this proposed alliance?

State BJP president Ranjeet Dass told The Indian Express: “We have 42 lakh members — even if each member gets only one additional person with him or her, then we have 84 lakh votes. So we are not worried. We are a democratic party and therefore, we welcome any new political party or formation.”

He added that the BJP will contest the elections highlighting the development work its government has done, how peace and harmony between different communities have been maintained during its tenure in the state, and focus on building an “atmanirbhar Assam”, with total focus on the agriculture sector.

Sarma has said that with the alliance, the name of the state Congress headquarters in Guwahati will change from Rajiv Bhawan to “Ajmal Bhawan” — and after that, during any feast, “another kind of meat” will be served there apart from chicken and mutton.

Sarma has also said that at his age, Tarun Gogoi should seek “Ram and Krishna” but he has sought Ajmal.

On Thursday, Sarma told reporters that he is determined to restrict the alliance to 25-30 seats. Pijush Hazarika, the state’s junior Health Minister, has said that in the Congress-AIUDF alliance, Ajmal will be the “drill master”, and that Tarun Gogoi and Ripun Bora will “sit or stand” according to his instructions.

When asked about the caustic comments by Sarma, Konwar said, “He is frustrated… If grand alliance is formed, then the BJP will not return to power.”

A SHORT HISTORY OF THE AIUDF