Explained: After Assam, Nagaland to set up a register of indigenous inhabitants. What is it?

According to a notification issued by Nagaland Chief Secretary Temjen Toy, the Nagaland government has decided to set up a Register of Indigenous Inhabitants of Nagaland (RIIN) with the aim of preventing fake indigenous inhabitants certificates. 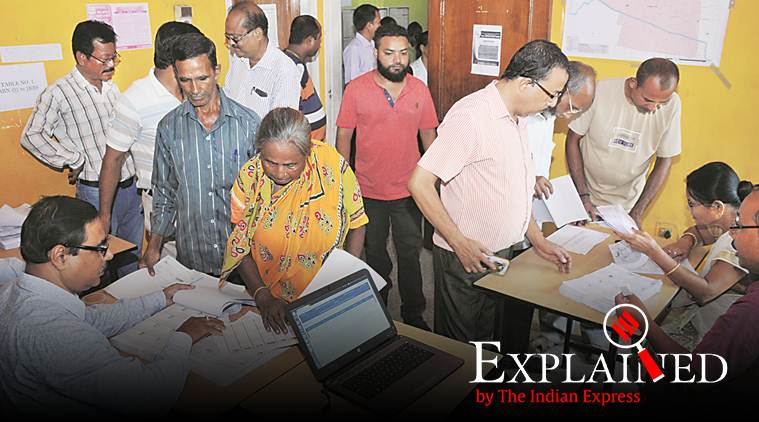 People check their names in the NRC list during a hearing at a Seva Kendra in Guwahati.

Four years after Assam started revising the National Register of Citizens (NRC), the Nagaland government has initiated a move to implement its own version of citizenship register, albeit only for indigenous communities of the state.

So, what is Nagaland’s initiative?

The RIIN list will be based on “an extensive survey”. It will involve official records of indigenous residents from rural and (urban) wards and would be prepared under the supervision of the district administration. The preparation of the list will start from July 10, 2019, and the whole process will be completed within 60 days from the start. Designated teams of surveyors will be formed within seven days from the date of publication of the notification, and thereafter these teams will be sent across each village and ward.

How will the survey be done?

The designated teams comprising Sub-Divisional Officers (SDO), Block Development Officers (BDO), Headmasters and other nominated members, will make a list of indigenous inhabitants in the state. The database will note each family’s original residence, current residence as well as the concerned Aadhaar numbers. This provisional list will then be published in all villages, wards and on government websites by September 11, 2019. Over the next 30 days, that is by October 30, 2019, claims and objections will be entertained.

What is the review procedure?

Respondents will be given an opportunity to make their case before the authorities. Eventually, respective Deputy Commissioners will adjudicate on the claims and objections based on official records and the evidence produced. This process will be completed before December 10, 2019.

Based on the adjudication and verification, a list of indigenous inhabitants will be finalised and each person will be given a unique ID. The final list or the RIIN will be created and its copies will be placed in all villages and ward. Electronic copies of the list will also be stored in the State Data Centre. A mechanism or electronic and SMS-based authentication will be put in place. All indigenous inhabitants of the state would be issued a barcoded and numbered Indigenous Inhabitant Certificate. The process will be conducted across Nagaland and will be done as part of the online system of Inner Line Permit (ILP), which is already in force in Nagaland.

What is an ILP?

Inner Line Permit (ILP) is an official travel document required by Indian citizens residing outside certain “protected” states while entering them. The ILP is issued by the Government of India and is obligatory for all those who reside outside the protected states. With the ILP, the government aims to regulate movement to certain areas located near the international border of India.

ILP’s origin dates back to the Bengal Eastern Frontier Regulations, 1873, which protected the British Crown’s interest in tea, oil and elephant trade. It prohibited “British subjects” or Indians from entering into these protected areas. After Independence, in 1950, the word “British subjects” was replaced by Citizens of India and the focus of the ban on free movement was explained as a bid to protect tribal cultures in northeastern India.

How will be the process be monitored?

The entire exercise will be monitored by the Commissioner of Nagaland. In addition, the state government will designate nodal officers of the rank of a Secretary to the state government. Their role will be to monitor the implementation. However, they will have no say in the adjudication process. The nodal officers will submit monthly reports of their visits and their assessments to a permanent committee set up under the Home Department to monitor the whole exercise. Nagaland Chief Secretary Temjen Toy too will monitor the entire process firsthand.

How will the RIIN be updated?

The notification issued by Nagaland Chief Secretary Temjen Toy states “… in case anyone who is left out of the RIIN, he/she will need to file an application before Home Commissioner who will get the matter verified and take necessary action for updating the RIIN if needed.”