Indian society lives in the shadow of Partition even today. The search for the “real culprits” behind the division of India continues. And prima facie, Jinnah seems to fit the bill. Muhammad Ali Jinnah’s major intervention in Indian politics from the 1940s onward represented an emphatic and categorical denial of this idea of the single Indian nation. (Illustration: CR Sasikumar)

A BJP MP wrote to Aligarh Muslim University last month, demanding to know why a portrait of Pakistan’s founder Muhammad Ali Jinnah was hanging on the wall of the students’ union office. AMU explained that Jinnah was a founder member of the university court who had been given life membership of the union 80 years ago, and that his portrait had been there for decades. However, protests and clashes on campus followed.

SALIL MISRA, historian of Modern India and Pro-Vice Chancellor of Ambedkar University Delhi, explains to The Indian Express the historical context of Jinnah’s politics, and why it continues to retain relevance for certain groups in India.

Why does Jinnah provoke anger even 70 years after Independence?

The mainstream Indian nationalism that started developing from the end of the 19th century was civic and territorial. It was based on the idea that all Indians, irrespective of their language, religion and culture, were part of the single Indian nation. This idea of Indian nationalism was, of course, very uneven in its spread. It did not reach all groups, communities and regions at the same time. But it did become the template for mainstream Indian nationalism, and was espoused by Naoroji, Gandhi, Tagore and Jawaharlal Nehru, among others. Jinnah’s major intervention in Indian politics from the 1940s onward represented an emphatic and categorical denial of this idea of the single Indian nation. He led a massive political movement around the idea that the Indian people were not one, but two nations — Hindu and Muslim — that could not live together. In a climate in which territorial Indian nationalism had become the most popular way to imagine the Indian nation, the politics and ideology of Jinnah, particularly after 1940, provoked offence and animosity. 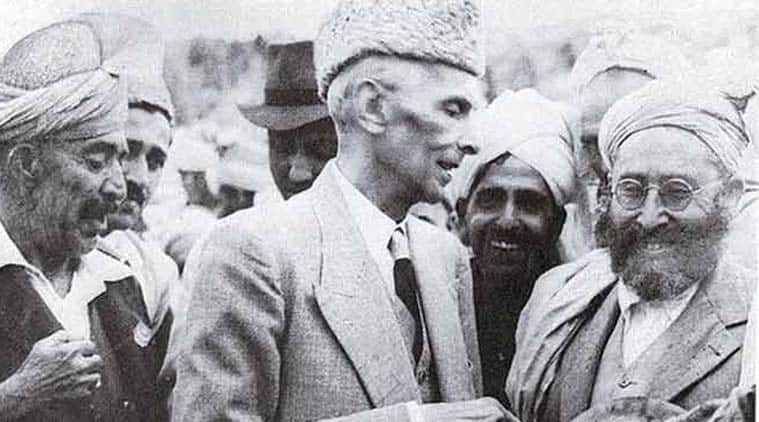 From 1940 onward, Jinnah had launched a powerful communal movement among Indian Muslims, and it was obviously not possible for him to retreat from that. (Express Archive photo)

Indian society lives in the shadow of Partition even today. The search for the “real culprits” behind the division of India continues. And prima facie, Jinnah seems to fit the bill. The decades since the 1980s have seen a particularly aggressive form of Hindu communalism masquerading as “nationalism”, which has debunked the inclusive and plural idea of Indian nationalism as “pseudo secularism”. This brand of majoritarian politics has created its own heroes and villains for the “historical wrongs” done to Indian society. In this version of history, Jinnah emerges as the main villain, for reasons that are obvious.

But was Jinnah the unquestioned leader of Indian Muslims?

Certainly not, until at least 1937. He was only one of several, and a large number of important Muslim leaders were with the Congress. There were hardly any takers for Jinnah among the Muslims of Punjab, Bengal and Sind. However, after taking over the leadership of the Muslim League in 1937, Jinnah launched a powerful political campaign to dub the Congress as a purely Hindu body, and to preach political separation between Hindus and Muslims. He projected a Congress-Muslim divide as a Hindu-Muslim divide, and argued that a Congress government would be a “Hindu Raj”, and that Muslims would be persecuted in Hindu-dominated independent India. He also began argued that India was basically unsuited to modern democracy. His tireless campaign proved to be successful, and it can be said that by 1940, Jinnah was indeed the most influential political leader among Indian Muslims.

So what is it that led him to abandon the Congress idea of Hindu-Muslim unity and demand a separate Muslim nation?

Jinnah began his political career in the Congress, and was a votary of united territorial Indian nationalism. He disapproved when the Muslim League was formed in 1906, frowning at its pro-British and elitist orientation. It was only in 1913 that he joined the League, when its politics began to turn against the British. It is possible that he was persuaded by Congress colleagues in order to bring the League closer to the Congress. Jinnah was instrumental in effecting a pact between the Congress and the League in 1916.

Jinnah, at this time, was a believer in the old moderate type of politics. He left the Congress in 1920 after it began, under Gandhi’s influence, to change into a mass organisation with a radical programme that included non-cooperation and civil disobedience against the British. He began to work on organising a separate political platform of Indian Muslims which, in the 1930s, developed in an exclusively separatist and communal direction. By the end of the decade, this platform had adopted an extreme communalist position and begun to demand complete political separation between Hindus and Muslims.

Was Jinnah the first to propound the two-nation theory?

Some vague ideas of political separation had begun to develop since the late 19th century. In the early 20th century, with the growth of active Hindu and Muslims communalisms, these ideas began to gather momentum. In 1930, Sir Muhammad Iqbal said at the Muslim League session in Allahabad that all Muslims of North-West India could be organised into a separate polity. In 1937, V D Savarkar declared from the platform of the Hindu Mahasabha that Hindus constituted a nation in themselves. This was nothing but a variant of the two-nation theory. The two-nation theory should be understood as the product of the steady communalisation of Indian politics and society since the late 19th century. The British played a particularly negative role in this process, by creating institutional structures that kept the two religious communities separate from each other. They did this through a model of democratic politics in which voters, constituencies and candidates were all divided along religious lines. Hindus and Muslims were grouped as separate voters and constituencies. This provided great incentive to organisations claiming to champion separate Muslim and Hindu interests.

In recent times, Jinnah has been reassessed as a constitutionalist by, among others, L K Advani and Jaswant Singh, essentially on the basis of his first speech to the Pakistan Constitutent Assembly. How valid is this reassessment?

One should not read too much into a single statement made by Jinnah after Pakistan had been granted by the British. To assign prime causative value to a single isolated statement, to the exclusion of the wider context, does not make for a valid historical explanation. From 1940 onward, Jinnah had launched a powerful communal movement among Indian Muslims, and it was obviously not possible for him to retreat from that. The extreme communalism he had unleashed was the genie trapped in the bottle of history. His address to the Constituent Assembly reflects at best a feeble desire to put the genie back after it had served its purpose.

Many leaders and intellectuals have used this statement to exonerate Jinnah of the charge of spreading communalism, and to “fix” the responsibility for Partition on other actors, mainly Nehru and Gandhi. This has been a handy tool in the politics of Congress-bashing.