Twenty years later, the world is still grappling with the deeper philosophical, political, economic, and social consequences of “that day” — of the most audacious attack on American territory — and the forces that were unleashed thereafter. 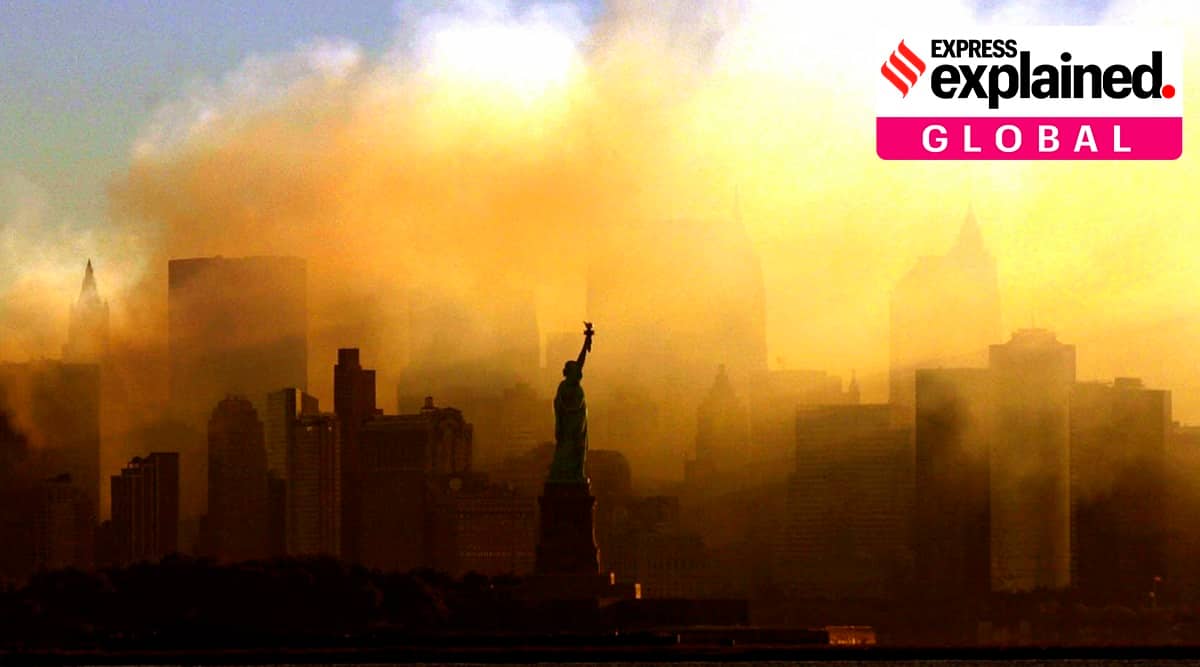 Four days later: The Statue of Liberty stands in front of a still smouldering lower Manhattan at dawn on September 15, 2001. (AP Photo/File)

No other event of the 21st century has defined international politics quite in the same manner as that of September 11, 2001.

Twenty years later, the world is still grappling with the deeper philosophical, political, economic, and social consequences of “that day” — of the most audacious attack on American territory — and the forces that were unleashed thereafter.

While President Joe Biden’s withdrawal of US troops from Afghanistan may suggest a closure of the American war on “global terror”, in almost every sense, almost everywhere, we are living in a different, more “precarious” world.

As the celebrated philosopher Judith Butler reminded us in a series of controversial essays after the terrorist attacks of 9/11, a collective sense of vulnerability and mourning could have led to a deeper sense of solidarity and the search for global justice, had certain policy choices been made.

But sadly, twenty years later, we are confronted with a world that is arguably more deeply divided, less at peace with itself, and still searching for alternatives beyond the Manichean choices that confront our fragile habitat.

For India, and much of the global south, life and living was precarious even before the war on terror became part of the hegemonic discourse; post-American departure from Afghanistan, the levels of insecurity have been heightened. India’s close identification with the US, and dependence on it, highlights starkly the dangers of bandwagoning with superpowers driven by their self interest, and the necessity of retaining independence on critical choices of war and peace.

Why did 9/11 represent such a rupture in the very imagination of international politics?

First, and perhaps at the most banal level, the myth of American impermeability was demolished. For generations, the United States rested on the illusion that it could, when it wanted to, isolate itself from the troublesome world beyond its frontiers. This deep sense of complacency, deeply ingrained within the popular psyche, was at the heart of the American dream.

The invulnerability of America was partially eroded by the Soviet forays into space through the testing of the Sputnik artificial Earth satellite during the early days of the Cold War, and by the arrival of the intercontinental ballistic missiles. But al-Qaeda’s attacks on the Twin Towers in New York breached that idea forever. The American dream of being capsuled in the comfort of a protective shell was shattered in the most crude, irreparable manner.

Second, it required more than a flight of imagination to believe that unarguably the most powerful military and economic power in history could be dealt such a body blow by a group of individuals attached to a non-state actor, the al-Qaeda, led by the fantasies of one man, Osama bin Laden, operating from a corner geographically, socially, and culturally as remote to the United States as was possible for two entities to be while inhabiting the same planet. In a particularly perverse manner, the idea of the Westphalian international state system, rooted in outdated ideas about security and sovereignty, became less coherent after 9/11.

Advertisement
Opinion |PB Mehta writes: What 9/11 unleashed on us

Third, the end of the Cold War had led to American triumphalism — its hegemonic power was undisputed, its faith in its liberalism was more muscular after the disintegration of the Soviet Union, and its hard and soft power seemed to rule supreme. The red flags of terrorist attacks in East Africa and the Gulf were treated with contempt reserved by Empires for minor subaltern rebellions in remote outposts on the periphery — also ignored were the rise of political Islam, and even the crude attacks in Manhattan.

A person touches an inscribed name at the National September 11 Memorial and Museum ahead of the 20th anniversary of the 9/11 terrorist attacks, Friday, Sept. 10, 2021, in New York. (AP Photo: Matt Rourke)

9/11 broke through this illusion. What went wrong? The first response to the attacks could be located in the philosophy of Bernard Williams — even though he wrote mostly before 9/11. It was quietly recognized that history had not ended (like pop theorists such as Francis Fukuyama had concluded), but another, more dramatic, chapter in global politics had just begun.

Fourth was the recognition that the largest military industrial complex on Earth, with the most powerful intelligence system synergised with real-time information from allies across the world, had failed to recognise the potency of the threat posed by al-Qaeda, and to neutralise it in time. The report of The National Commission on Terrorist Attacks Upon the United States — also known as the 9-11 Commission — concluded that the greatest failure of the national security establishment was the “failure of imagination”, of not recognising the gravity of the threat.

Don't miss |On the 20th anniversary of 9/11 World Trade Centre attacks, the story of a miraculous escape

Bin Laden had assumed that the attacks would unite the Ummah — the global Muslim community — and make the United States even more vulnerable to similar terrorist attacks. The response of America was not just swift but ferocious and almost overwhelming in its design, to the point that the use of force seemed to be intended to demonstrate the almost unlimited might of American hegemonic power.

The swift attack on Afghanistan, the dispatching of the Taliban, the building of an almost unprecedented global coalition (“you are with us or you are against us”), a consensus within the UN, the neutralisation of the core of al-Qaeda and ultimately, the killing of Bin Laden in Abbottabad, Pakistan, demonstrated that America was willing to be unforgiving in dealing with those responsible for 9/11.

In this sense, Bin Laden was deeply out of touch with reality. Moreover, there has been no terrorist attack of consequence on the US since 9/11.

Advertisement
Smoke rises from the burning twin towers of the World Trade Center after hijacked planes crashed into the towers on September 11, 2001 in New York City. (AP Photo: Richard Drew)

But burdening the clinical calculus of these decisions was a wasted war in Iraq (in the futile search for weapons of mass destruction) — and “mission creep” in the forever wars of Afghanistan, which went from defeating al-Qaeda to building democracy and civil society to finally handing over power, in supremely ironical circumstances, to the Taliban.

The responses to 9/11 were built on the frightening empowerment of a new national intelligence and security establishment that depended on drones to precisely target adversaries, and on the most sophisticated surveillance systems at home and aboard. The Guantanamo Bay detention centre in Cuba and Abu Ghraib prison in Iraq became symbols of American excesses, including the frequent use of torture — and terms like waterboarding and wiretapping became part of the cultural vocabulary of our troubled times.

At home, the “land of the free” became almost an Orwellian state as simple individual rights to privacy became casualties in the fight for national security, including through the Patriot Act. Travel to the United States, especially with a Muslim name and an Arab or Pakistani passport, became a nightmare as the rise of Islamophobia (part of Bin Laden’s wish list) became a near global reality.

Indeed, the rise of Donald Trump, and the current deep polarisations within American society could in ways be traced back to 9/11 and what followed thereafter.

Meanwhile, as the war on terror became the single most important focus of American strategy and foreign policy, the rise of China, a rival and a potential adversary, was ignored until Xi Jinping abandoned his predecessor Deng’s Xiaoping’s 24-character strategy (to avoid the limelight) and declared the arrival of China though its new muscular foreign policy.

With the benefit of hindsight, the greatest beneficiary of America’s obsessive zeal with the global war on terror has been China, whose ambitions and expansion have been unfettered by the only the power that could have controlled those impulses: the United States.

Also in Explained |Post 9/11 attacks: Some gaps in security grid, but tighter overall

For India, a victim for decades of cross-border terrorism from Pakistan, 9/11 was a marker — an important one in the history of global terrorism. In his address to the 57th Session of the UN General Assembly, Prime Minister Atal Bihari Vajpayee, in September 2002, said:

“Mr President, two days ago, we commemorated the first anniversary of a terrible event, which focused the collective global consciousness on international terrorism. Terrorism did not start on September 11. It was on that day that it brazenly announced itself on the global stage, flaunting its immunity from distance and power. As a country exposed to the depredations of terrorism for decades, India empathised with the pain of the American people, admired their resilience in coming to terms with the consequences, and supported the bold decision to counterattack terrorism at its very source.”

An Expert Explains |Terror's new age: The threat that persists

Unfortunately, with President Biden withdrawing from Afghanistan, and in many ways declaring that the global war on terror was no longer the central focus of American attention, India will have to fight many of its battles alone — as it did before 9/11.

In this sense, and more, history has come a full circle for New Delhi. Hopefully, the lessons of the need for making independent decisions and fighting “your own battles” will not be lost to decision-makers who had hoped that the US would not abandon the cause so soon.