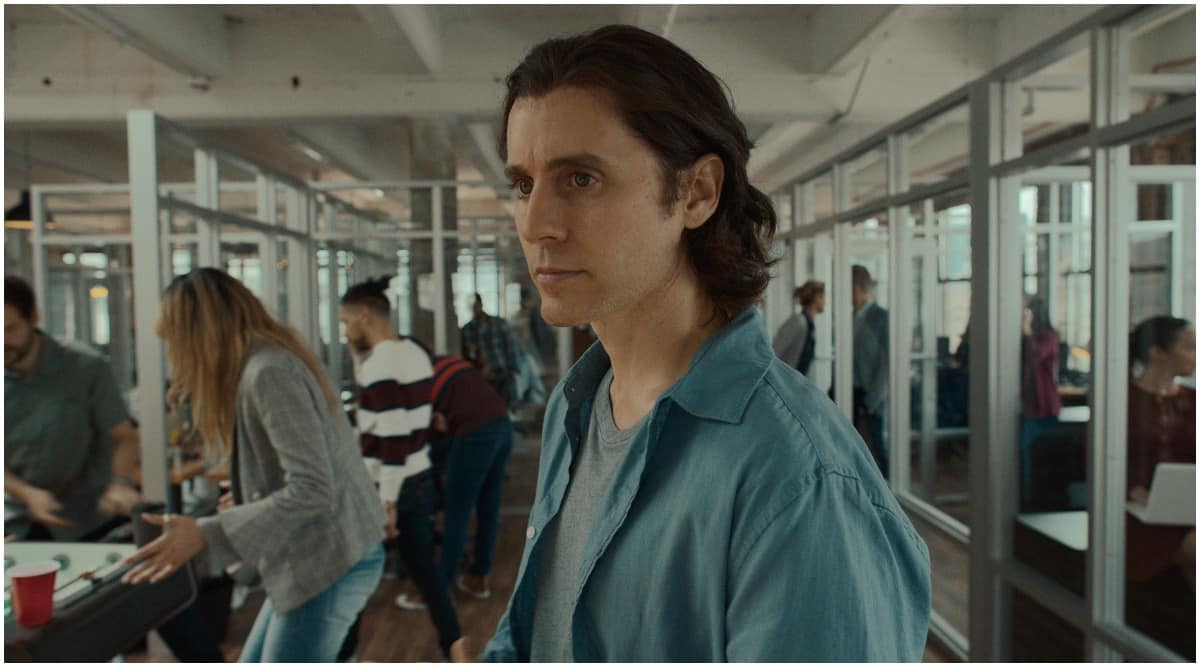 Jared Leto in a still from WeCrashed. (Photo: Apple TV+)

To say that Anne Hathaway and Jared Leto have a tendency to overact is an understatement. When presented with the option of caressing a scene or kicking it, both Oscar-winners often turn to a third alternative—they choose to strangle the life out of it with their bare hands. So, it’s no surprise that WeCrashed—the new Apple TV+ miniseries, based on a Wondery podcast about the rise and fall of the ‘unicorn’ start-up WeWork—lives and dies on the strength of its two central performances.

WeCrashed was never going to be dull—especially when you go into it knowing that Hathaway and Leto are operating at 11—but watching it is a lot like watching an arsonist set fire to someone’s newly-built dream home. Sadly, with both these actors, this has become the norm rather than the exception.

Also read |Severance review: Apple’s best show yet has one of the greatest debut seasons in recent memory. 5 stars

We all saw what Leto did to House of Gucci recently, and in WeCrashed, he gives the enigmatic ‘serial entrepreneur’ Adam Neumann the same vocal affectations that he cursed the dim-witted Paolo Gucci with in Ridley Scott’s film. There are a lot of exaggerated pauses and pronounced ‘umms’ and ‘ahhs’ when Leto slips into this mode, at least when he’s not playing Rockstar Jesus, which, incidentally, is how you can best describe Adam.

Adam was right. Millennials don’t want to make a living; they want to make a life. And so, WeWork was born. Scores of youngsters jumped onboard, swayed by Adam’s Osho-like personality and his tantalising promise of a more connected future. But the red flags were always on proud display. Adam preyed on their innocence with brand new MacBooks and the promise of equity. He sold them a lifestyle that they never wanted; a lifestyle that involved all-night benders and an intense pressure to participate.

The cult-like work culture that Adam fostered at WeWork could theoretically apply to any number of tech start-ups, run by founders who think of themselves the Silicon Valley equivalent of Sadhguru. In a remarkable coincidence, we’re getting three very similar corporate crash-and-burn stories in the same month. In this incubator for television shows about doomed start-ups, WeCrashed is joined by Showtime’s Super Pumped, the story of Uber, and Hulu’s The Dropout, which dramatises the Theranos scandal.

Of course, it can’t be a coincidence that all three shows are practically overlapping with each other. In fact, a bit of an Avengers-like crossover happens in WeCrashed, when Adam watches a news telecast about Travis Kalanick’s dismissal as Uber CEO, just as the WeWork board was coincidentally contemplating firing him.

But watching the show, you wouldn’t know exactly why we’re witnessing this boom in stories about start-up bros. Blame it on the exaggerated performances—I’ll get to Hathaway in a minute, promise—or slam the sloppy writing, but it’s never clear if WeCrashed is satirising Adam’s asinine running of his company, or if it’s suggesting that his eccentricities were pigeonholed by narrow-minded decision-makers. Had he been allowed to spread his wings, the show implies rather dangerously, he could’ve conquered the world, and then, who knows, maybe changed it. For instance, every time Adam experiences a victory, moral or otherwise, they unironically play Katy Perry’s “Roar” in the background.

But as the world has evolved, so has our definition of who qualifies as a ‘villain’. Earlier, it used to be Russian oligarchs or colonial oppressors. Nazis, as we know, never go out of fashion. But now, the dominant antagonists in pop-culture are hoodie-wearing head honchos of tech conglomerates. Even fictional films are taking this route; in fact, Riz Ahmed has played the same exact character twice, in Jason Bourne and Venom. As has Jesse Eisenberg, in Batman v Superman: Dawn of Justice, and a little film called The Social Network.

What made that movie a classic was that it had the foresight to declare, in 2010 no less, that Mark Zuckerberg isn’t the heroic figure that most observers at the time had made him to be. And despite the luxury of hindsight, WeCrashed sits on the fence about both Adam and his equally bizarre wife, Rebekah, as they belittle others, delude themselves, and fire people willy-nilly—sometimes for having ‘bad energy’, and on other occasions, simply out of insecurity or pettiness. I will concede that the show is a tad bit more critical of Rebekah than it is of him, but then, you could add vague sexism to its list of offences as well. For some reason, creators Lee Eisenberg and Drew Crevello have decided to frame this 21st Century tale of greed and megalomania through the prism of a love story that unfolds in absolute earnestness.

There’s zero subtlety here—WeCrashed is the kind of show in which a character has an existential crisis moments before someone else randomly verbalises their worst insecurities. And then, in one scene, Adam writes ‘we’ in magic marker on a glass, downs its contents and flips the glass over, only to notice that the ‘we’ has now become a ‘me’. Get it?

And just when you think that the show has finally decided to call out this ridiculous behaviour—even if it is just closing the stable door, like The Wolf of Wall Street—it has a character wonder out loud: “Who wins in a fight—the smart one or the crazy one?” And we find ourselves back at square one, convinced that this is a deal that we should walk away from.