Severance review: Apple’s best show yet has one of the greatest debut seasons in recent memory. 5 stars

Severance review: Thrilling and thought-provoking, Apple's new show is something that Christopher Nolan would be proud of. 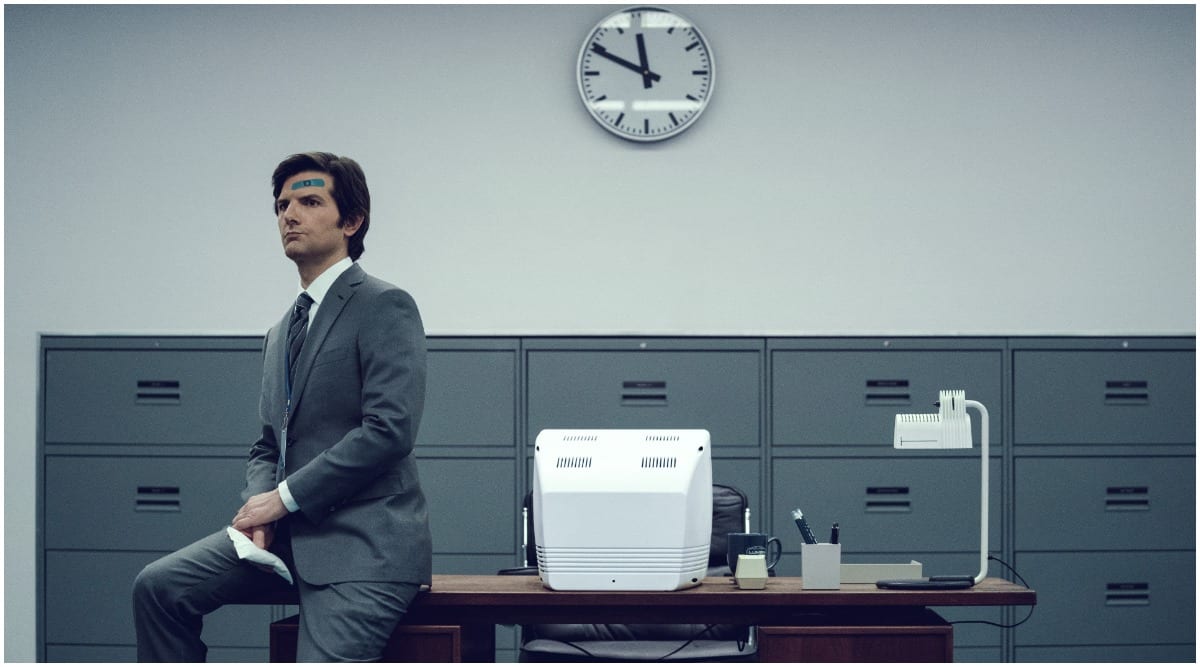 Severance opens with a shot of our protagonist—Mark, played by Adam Scott—weeping in his car. He composes himself a moment later and walks into the Brutalist hunk of concrete that he calls an office. There, he is greeted by a Lenin-like mosaic of an imposing-looking man’s face. This is the headquarters for Lumon, a shadowy corporation that we will learn more about as the show progresses. Mark, an employee of Lumon, walks silently into a locker room, changes into nondescript formals and enters an elevator. Director Ben Stiller’s camera closes in on Scott’s face; there’s a zap, and the elevator deposits Mark at what can only be described as the inside of an 80s-era Apple store. This is where he works.

Thought-provoking, thrilling, and impeccably well made, Severance is a remarkable achievement in long-form storytelling; a show so good that it reminded me of what I felt after watching Inception for the first time.

Having binged all nine episodes in basically two sittings, I immediately set out on an investigation. I needed to know who the person behind this masterpiece was. His name is Dan Erickson, and according to IMDb, he has no other writing or producing credits, which is suspicious. There’s only one interview of his that I could find, and even that didn’t have any information about him. In a way, he’s almost as mysterious as the Lenin-like overlord of Lumon Industries.

But Severance is too flawless to be the work of a debutant, which led me to speculate if Dan Erickson is a front for someone else. Had Christopher Nolan, I mused only half-jokingly, secretly gone and made a TV show? He hasn’t, of course; and a few minutes later I discovered the only other piece of information about Erickson that I could immediately find, that he is a 38-year-old graduate of Western Washington University.

Certainly, some of the metaphysical themes that the show tackles—morality, identity, free will—have preoccupied Nolan for years. Even visually—although Severance is clearly not shot on IMAX film—the show has the same fascination for antiseptic architecture and maze-like MC Escher interiors that we’ve seen in Nolan’s movies. It also has a mordant sense of humour, but what truly makes it special is the strong emotional core of Erickson’s writing, which Stiller and his directing partner Aaoife Mcardle are able to routinely tap into.

Here’s the premise: In a vaguely defined alternate reality, there exists a controversial surgical procedure through which people can separate their work memories from their personal memories, effectively creating two versions of themselves that have no idea about the other; what they love, whom they love, their ambitions and dreams and families. Mark is among the thousands of regular people who’ve undergone this ‘severance’ procedure, essentially sentencing his ‘work self’ to a life of (corporate) slavery.

At home, his decision to ‘sever’ his mind is a thorny topic; both his sister and her husband appear to disagree with the ethics of the procedure, but have come to begrudgingly accept Mark’s choices. The topic has also created political and societal rifts. Move over Adam McKay, Severance is the cleverest satire about our divided times that I’ve ever seen.

But really, it’s a paranoid thriller. Because in the first episode, Mark’s outside self—Lumon, by the way, has come up with cutesy (and slightly naughty) terms like ‘outie’ and ‘innie’ for a person’s two halves—runs into a hassled-looking man who says he’s his best friend from work. The stranger’s name is Petey, and somehow, he’s managed to un-sever his mind. Petey comes with a warning for Mark: Lumon isn’t what it says it is, and if Mark were follow the trail of clues that Petey has laid out for him, he’ll discover the truth about not just himself, but about a global conspiracy.

Severance will mean different things to different people—Mark’s Neo-esque hero’s journey might remind viewers of The Matrix, and the corporate culture commentary is there for all to see—but that would be a reductive reading of this dense material. More than anything else, the show is a takedown of blind faith and organised religion. Those who draw parallels between the inner workings of Lumon Industries and the Church of Scientology will be on the right track, but they’re probably also deflecting scrutiny from whatever religion they subscribe to.

One of the most fascinating characters, for instance, is Mark’s workplace colleague Irv, played by John Turturro. Irv is easily the biggest ‘bhakt’ of the lot, and has the Bible-like employee’s handbook memorised. He scolds Mark for letting his mind wander, and for ever doubting Mr Eagan’s commandments. His redemption arc across the season’s nine episodes is perhaps among the most stunningly beautiful things I’ve ever seen on television. Because underneath the show’s sharp social commentary and cold visual aesthetic, it’s a time-hopping, dimension-destroying love story.

Severance’s matryoshka doll structure never, ever relies on exposition dumps, which I count as a minor miracle. Firmly subscribing to the ‘show, don’t tell’ method of storytelling, Erickson’s writing invites the viewer to learn about the mechanics of the world practically. So, when a newly-minted ‘innie’ Helly wakes up with no memory of who she is, we watch as she flails about in the office, and tragically learns what her ‘outie’ has done to her. It’s so much more effective than having someone sit her down and explain the severance procedure to her. She wouldn’t buy it, and more importantly, we wouldn’t buy it. But by showing us how the world works, Severance successfully put both the viewers and Helly in a submissive position. It’s one step ahead of us, always.

Because Severance is going to debut with zero publicity on Apple TV+—a streaming service notorious for not promoting its shows—it will have to rely entirely on word of mouth. If it manages to organically crossover into the mainstream—perhaps a couple of weeks after its February 18 debut—it will prove that no matter what, great stories will always find a way of connecting with audiences. Which is a rather romantic notion, no? And I’m expecting the works: Reddit discourse, Twitter tirades, new fan theories daily, and even Reels made on the show’s trippy theme song. This is your chance to get in on the ground floor on this show—get that Apple subscription—because I’m betting big.

India Women vs New Zealand Women 3rd ODI Live Streaming: When and Where to watch?