The storytelling of Ramyug is disappointing as it proceeds in a non-linear manner. Actors Diganth Manchale as Ram and Aishwarya Ojha as Sita fail to leave an impact as well. 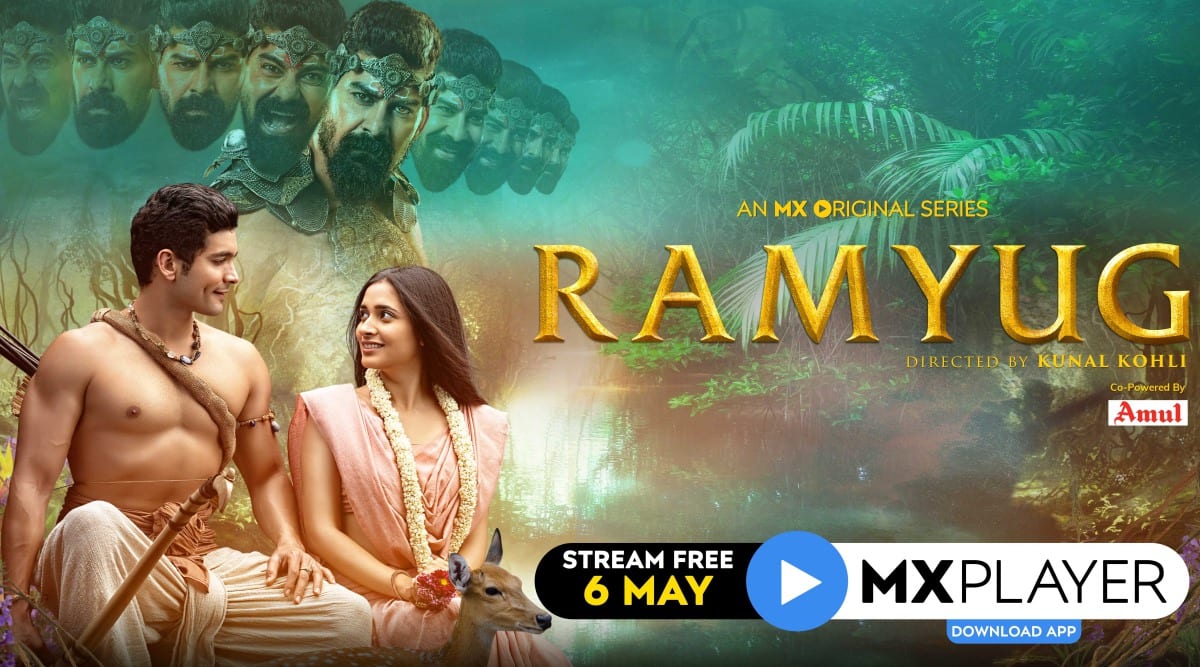 Ramyug is streaming on MX Player.

“The audience is very smart and will not accept everything that is dished out to them. However extravagant the product may be, they want to relate to it before accepting it wholeheartedly. Even if it is a remake, they want it to be at par or above the original, which rarely happens. Many times, it is done when the makers are fascinated or like a particular film and think they can make it better than the first one.”

Actor-director Satish Kaushik’s words ring true whenever a remake of a classic is on the anvil. That happened when Ramyug, which streams on MX Player starting today, was announced. Filmmaker Kunal Kohli wanted to “breathe life” into the story of Lord Rama for “younger audiences on an unparalleled scale.”

Much before the release of the magnum opus, the makers created hype by releasing its song “Jai Hanuman” in the voice of Amitabh Bachchan, with Ustad Zakir Hussain at the tabla. The actors of the 1986 original – Arun Govil, Dipika Chikhlia and Sunil Lahri – amplified the series.

Over the years, we have watched multiple versions of Ramyana — from Ramanand Sagar’s TV show to Siya Ke Ram on Star Plus (2013) and Gurmeet Chaudhary-Debina Bonnerjee starrer on NDTV Imagine. Kunal Kohli’s modernised version gets its target audience right as it is youth-oriented in its approach, but that is served along with awful CGI, ghastly acting and cringeworthy modification of the original.

From a web series that is mounted on such a large scale with probably a lot of money spent on the visual effects, the least you’d expect is that it would look picturesque. But, what you get instead is a lot of greenscreen work, which doesn’t blend with the human drama. Even the action sequences look clumsy.

The storytelling of Ramyug is disappointing as it proceeds in a non-linear manner. Lord Rama, Sita and Lakshman are in the jungle but it takes until the third episode to understand the ‘how’ and ‘why’ behind it. In one of the scenes, when we meet Ravana for the first time, we see his ten heads circling and talking to him. Instead of adding to the impact of the scene and the persona of this crucial character, Ravana’s introduction seems comic.

But that’s the challenge with replicating an epic, the comparisons are inevitable and sometimes unfair. If you are tuning to Ramyug just after watching the rerun of Ramanand Sagar’s original on Doordarshan, chances are you will miss the warmth, divinity and calmness of Ram brought to the character by Arun Govil. Here, Ram, played by Diganth Manchale, is not a divine figure. Rather, he has a chiselled physique who belongs to this era. Even Sita is not the serene figure that Dipika Chikhlia brought to life. But I wish actor Aishwarya Ojha would have taken a lesson or two on acting from her counterpart. Kabir Singh Dohan also fails to create that sinister aura of Ravana. It is only Vivaan Bhatena (Hanuman) and Akshay Dogra (Lakshman) who do justice to their roles.

Subscriber Only Stories
View All
ExplainSpeaking: How to evaluate a Union Budget
Mahesh Vyas writes: Why the job shortage is for real
Delhi confidential: Focus On Projects
Gandhi to Tagore: At old St Stephen’s campus, a glimpse into remnants of ...
Apply New Year promo code SD25
Also read |Streaming in May 2021: Radhe, Milestone, Toofan and more

In my opinion, if you are in a mood to indulge in some nostalgia or want your kids to revel in the mythological drama, choose between the 1986 Ramayan and Siya Ke Ram (2013). Hoping Ramyug gets on track in the remaining five episodes.