10 hilarious moments from Indian Matchmaking that left us in splits

Indian Matchmaking is just the kind of unintentional comedy that defines so-bad-that-it-is-good content. Here are ten moments from the show that left us rolling on the floor. Indian Matchmaking is just the kind of unintentional comedy that you need to have in your life.

Netflix’s latest reality show Indian Matchmaking has caught the fancy of the urban Indian crowd and they are simply loving the unintentional comedy that this show offers. The show has a huge ensemble of interesting personalities, starting with Sima Taparia – the matchmaker. Across the eight episodes of the show, we find it hard to believe that this was not designed as a comedy, especially with the appropriately placed awkward pauses and the choice of music.

While we understand that this show promotes a lot of archaic concepts, it works for a lot of viewers in an ironic way. Keeping that in mind, we list the ten funniest things that we saw in Indian Matchmaking.

2. When the face reader found everyone ‘stubborn’

We first meet Janardhan Dhurbe, the face reading expert, in the second episode of Indian Matchmaking. Now Dhurbe is such an expert that he will just look at someone’s photos and give us a detailed explanation of their personality but here, he had only one line for everyone he saw, ‘Yeh bahut ziddi hain’ (They are very stubborn).

3. When Aparna hated everything

I’m all for Aparna’s independent spirit and by no means do I support the aunties who expect her to adjust/compromise to get married. But, come on guys, who knows anyone who hates so many things? Well, now we all do, thanks to Aparna! “You know how I hate comedy” is now a meme and rightly so. From hating beaches, outdoors, comedy, relaxing, her job, Aparna needs to talk about everything she hates on her own podcast (even though she hates it). There’s a long list of things that Aparna hates, and that includes relaxing.

Soon after Aparna’s first date with Srini, there’s a scene where her family and Sima are discussing the bad date. Aparna explains why Srini is not the right fit for her and her mother chimes in saying, “Srini, the loser.” That statement had me look up at the screen with a confused expression, followed by laughter, of course. I felt bad for Srini because who is that direct while rejecting someone, that too on camera?

5. When Sima Aunty wanted Aparna to change her ‘talking pattern’

Aparna is quite disappointed after her date with Srini, and even though Sima Aunty is lining up more matches for her, she feels Aparna must change her “talking pattern.” The chemistry between Sima and Aparna’s mother was straight out of a saas-bahu show, and Sima proved it as she spoke about the latter’s ”bad vibes”.

6. Pradhyuman’s meeting with the life coach

The scene when Pradhyuman meets the life coach was strange, to say the least. While getting some obvious life advice, Pradhyuman asks the woman, “You meet so many people, what do the girls really want?’ To which, the woman replies, “Firstly, they want good looks.” As if the ‘pretty little rich boy’ wanted more ego boost, the woman went on to say that another thing a woman wants is “a man who is secure enough to allow the woman to be her own person.” Pradhyuman needs to grow up a lot more before he ends up with someone!

When Pradhyuman goes on the first date with Rushali, it had me laughing the whole time. Just the awkwardness of a first date, combined with some weird conversation, provides for some excellent cringe content. The line that took the cake here was when Pradhyuman asked Rushali if she liked animals, she replied in the affirmative and he says, “Mammals, or like sea life?” This hilarious line cannot be written even by the best comedy writers. The poor girl is so bowled over by the question that she just replies, “animals.” 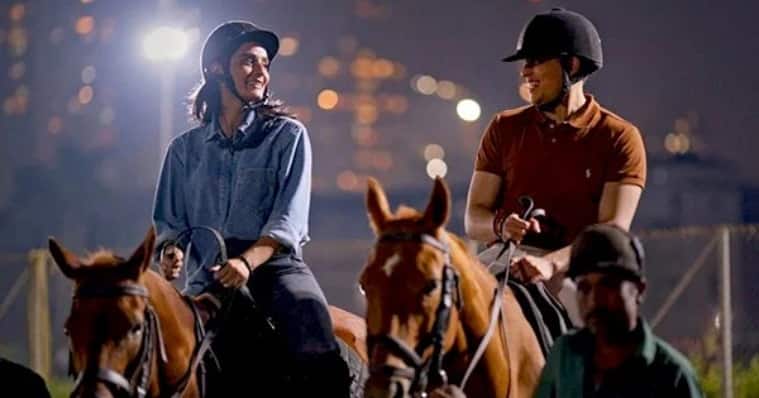 Pradhyuman and Rushali’s first date is the most cringe-worthy date of the entire show.

8. When Geeta turned out to be another Sima

Geeta, another matchmaker, enters the show in Ankita’s storyline and is introduced as the progressive matchmaker, if there is such a thing. We are given the impression that she is miles apart from Sima’s approach and believes in understanding a person rather than pushing them to ‘adjust’ but lo and behold, she is just the same. She shocked Ankita and us with her personality flip.

While the show was about men and women looking for partners, it was Akshay’s mother Preeti who had some of the finest lines. ‘This year you get married, next year, they have a baby’, had me rolling on the floor for a good ten minutes. By ‘they’, she meant her older son and daughter-in-law. Soon after Preeti said this, there was a shot of her daughter-in-law chuckling, which made me laugh even more. Preeti stole the show with her ‘outstanding’ lines.

Akshay is 25, and his mother feels he is already too late in getting married. Poor Preeti’s BP is out-of-control worrying for Akshay, but her son wants someone who is just ‘like his mother’. At one point Akshay says, “My mom is literally what I want to be looking at in a wife.” We can’t even begin to explain the tragi-comedy here.