On Wednesday's episode of Shark Tank India 2, Inside FPV co-founders Oshi Kumari, Arth Chowdhary, and Devyant Bhardwaj managed to secure Rs 75 lakh for 15 per cent equity in their company. 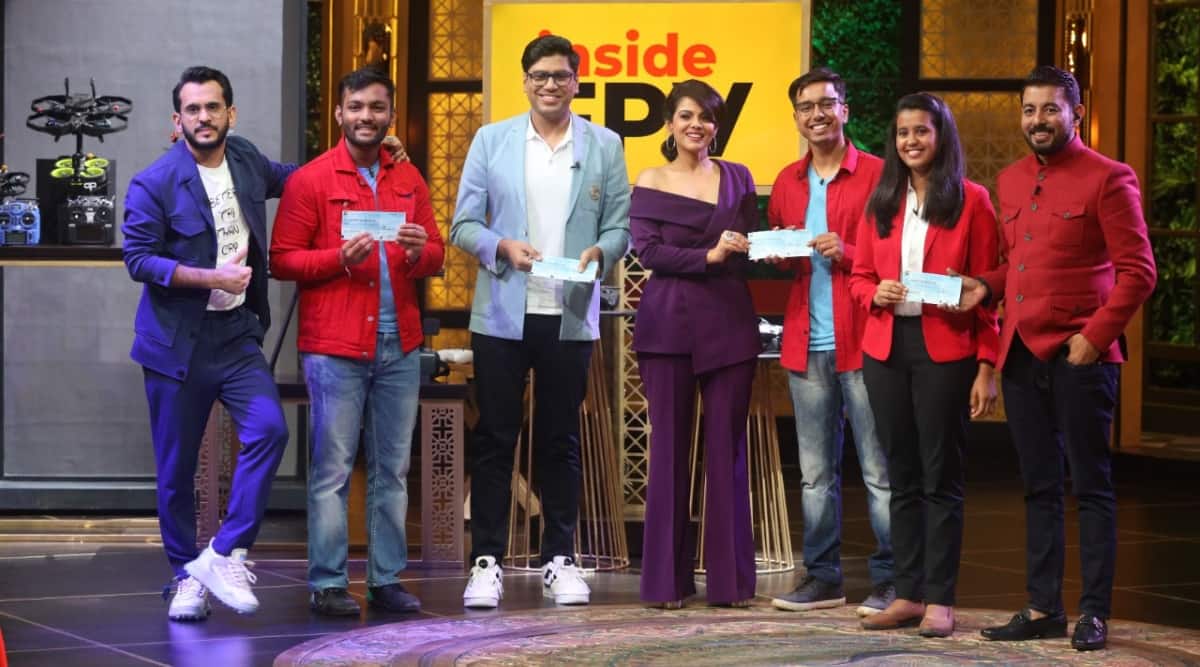 Three college students left ‘sharks’ impressed as they presented their company Inside FPV on Shark Tank India Season 2. The engineers from VIT Vellore presented India’s first consumer-based drone company and sought Rs 75 lakh for 4 per cent equity in their venture. After a long pitch, four ‘sharks’ Peyush Bansal, Amit Jain, Aman Gupta and Namita Thapar offered them the amount but took 15 per cent in return from the co-founders Oshi Kumari, Arth Chowdhary, and Devyant Bhardwaj.

In a chat with indianexpress.com, Arth shared that the team followed the response till late night after the episode aired. In three hours, their website saw 27,000 visitors and some ‘pretty good orders’. He said that as people will watch the episode, he is hopeful that there would be more sales. Giving details about what led them to fill up the Shark Tank India 2 forms, the young businessman said that he and his team have always believed in the power of manifestation. “After watching the first season, like many entrepreneurs, we too hoped to be in the tank someday. However, we didn’t know we will be there this year only. My co-founder Devyant was the one who took the initiative, and after a glitch, we actually managed to submit our proposal just a day before the last day.”

Arth Chowdhary further shared that while they were positive, they never imagined that four out of five ‘sharks’ will join them. He shared that each ‘shark’ brings different expertise and that would be beneficial for them in the long run. Stating that while Peyush and Aman were honestly on top of their list, after having meetings with Amit, they’ve realised how he is important for their business. “The bits of advice and suggestions he had for us have actually worked wonders. At the moment, we are grateful that all four of them trusted us,” he shared.

The young entrepreneur shared that their pitch went on for almost two hours, out of which 45 minutes were spent on discussion. He shared that they were sent out twice to discuss and make a decision. When asked to share some dos and don’ts for future pitchers, Arth said, “Particularly for young entrepreneurs like us, I want to say hojayega (it will happen). Build a strong team, have a solid pitch and it will be all good. Also, whatever may come, stay confident. Do your research well and answer all questions confidently. Know your brand inside out and face the sharks with a positive outlook.”

“Also, spit only facts. As they say, ‘hawa mein baat mat karna’ (don’t fake big numbers). And don’t get nervous, as sharks will be able to see through that,” he added.

Arth Chowdhary shared the road map ahead saying that they are working on manufacturing parts locally and also collaborating with brands. He shared that there are tech gurus and professors who have also been helping them. They also launched India’s first 3D drone interactive website, and plan to now create an ecosystem for drone users.

Given the three founders were still students when they formed the company, we asked them about their parent’s reactions. With a broad smile, he said, “I come from a Gujarati family, and was always clear that eventually, I will get into a business. I can say the same for Oshi and Devyant, who two were sure that a job was an alternate plan, but building a brand was what drove us. Honestly, for the first 16 months, no one even knew about the company. It was only in 2022 that we received grants and funds and awards. We started this with just Rs 5000 investment and post which we never put in any money. We are passionate entrepreneurs who work day-and-night to help our company reach bigger goals. Today, our team has the same objective and we can’t wait to grow in leaps and bounds.”