Priyanka Chopra has won her second consecutive People's Choice Award for Quantico. The actor looked ravishing in her peach dress and even did a wiggle while accepting the award. Trust Priyanka Chopra to always come back with a vengeance. After she had us all worried with her on-set injury last week, Priyanka was seen in action once again at the People’s Choice Awards 2017. And she not only won the red carpet — obviously, she won her second People’s Choice Award for Quantico as well. The actor defeated her ABC counterparts Ellen Pompeo, Kerry Washington, Taraji P. Henson, and Viola Davis to win in Favourite Dramatic TV Actress award.

Speaking about her injury on Quantico’s sets, the actor told media, “I was a little nervous… I didn’t know if I would make it, but I got so bored sitting on my couch for three days.” While shooting in New York on January 12, she slipped and fell, hitting her head. She had to be hospitalised after suffering a concussion. “I was supposed to be saving someone, as usual, Alex Parrish-style,” Priyanka added in the report, saying, “The doctors said another couple of days and I should be okay.” She also thanked her fans for sending their love.

However, at People’s Choice red carpet on Wednesday, Priyanka showed no signs of being under the weather.

Dressed in a peach ensemble by Sally LaPointe, she said in her acceptance speech, “I am really happy being a drama queen and this is how it is done… thank you to the people. As everyone has been saying, it has been an incredible journey. Every single woman who was nominated with me today, all these incredible actresses were the reason that I joined television. They were the reason that I am here today, receiving this award in the same category as them is so overwhelming. Thank you to all who have accepted me and liked my show… can I do a little wiggle? Sorry, that is the concussion talking. Thank you and this means the world to me.” She also thanked the entire cast and crew of “Quantico”, her first Hollywood project. 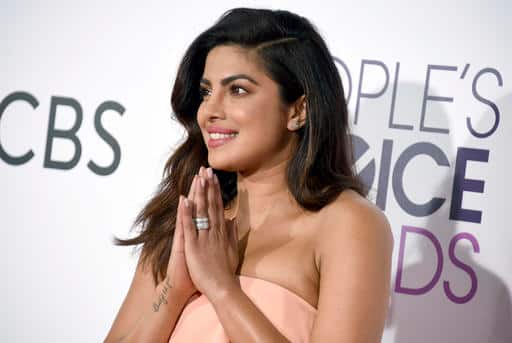 Priyanka’s mother and Baywatch co-star Dwayne Johnson was among the audience. Priyanka will make her Hollywood debut with Baywatch in summer this year.

Taking to Twitter after her win, Priyanka wrote to her fans, “Big ❤ to my #PCManiacs & all who voted. 🙏 for all the love you’ve given #AlexParrish. Tune in to @QuanticoTV now on Mondays, from Jan 23rd.”

Big ❤ to my #PCManiacs & all who voted. 🙏 for all the love you’ve given #AlexParrish. Tune in to @QuanticoTV now on Mondays, from Jan 23rd pic.twitter.com/2yKXEv9Os8