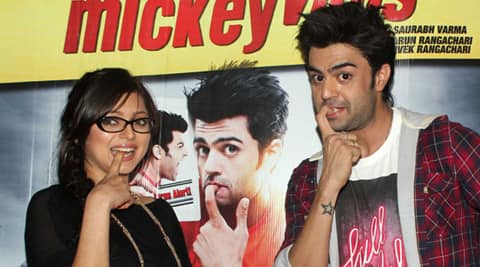 Popular TV anchor Manish Paul, who has replaced Drashti Dhami on ‘Jhalak Dikhhla Jaa 7’, says his comeback on the show has not affected his friendship with the ‘Madhubala’ actress.

The 32-year-old actor has taken over hosting job on the Colors show from Dhami from this week onwards.

“Our friendship is not affected at all by this. I spoke to Drashti before taking up the show. She is a very dear friend of mine. When I told her I will be replacing her she graciously accepted that and there was no problem as such. I don’t know why Drashti got replaced,” Manish told PTI.

Manish hosted the last two seasons of the celebrity dance reality show with Ragini Khanna and Kapil Sharma. Manish and Kapil garnered lot of appreciation for their comic antics on the show.

As Manish and Kapil got busy with other projects, the channel decided to introduce Dhami, last season’s winner on ‘Jhalak’, as the new host with Ranveer Shorey.

But the channel was forced to replace Dhami as she failed to strike a chord with the audience as a host.

Manish, who has shot two episodes so far, said his collaboration with Shorey was fun.

“I was not offered the hosting gig this time. But the channel contacted me recently. So far, I have shot just two episodes of ‘Jhalak…’. It was good working with Ranveer. We have a good comic timing on the show. Ranveer is a good host,” Manish said.

The ‘Mickey Virus’ star is happy that the audience is having a say about who they want on their favourite show.

“I got many messages and mails from people. They took to social networking sites to express their opinion about the show. I think it’s a good change because audience is an integral part of a reality show and apart from voting for the contestants they have full say on a host’s fate too,” Manish said.

After his successful stint as an anchor, Manish debuted as a Bollywood actor with ‘Mickey Virus’. He has now signed two films, a rom-com and a dark thriller.

Manish says he had to adjust his dates to return on the show.

“I am in negotiations for a rom-com. I had to adjust my schedule according to that. It wasn’t that tough because the show will only consume two days of my week and rest of the days I can shoot my film,” he said.

Manish’s second outing as an actor in ‘Tere Bin Laden 2’ is yet to hit theatres. The film was earlier scheduled to release by the mid of this year but it has been postponed.

“I don’t know why this delay. I feel some post-production work is still left,” he added.