In an interview, Helen Mirren discussed her admiration of the Potter canon, making a TV fashion statement, and female bonding on the set of the DC Comics-based film Shazam! Fury of the Gods. 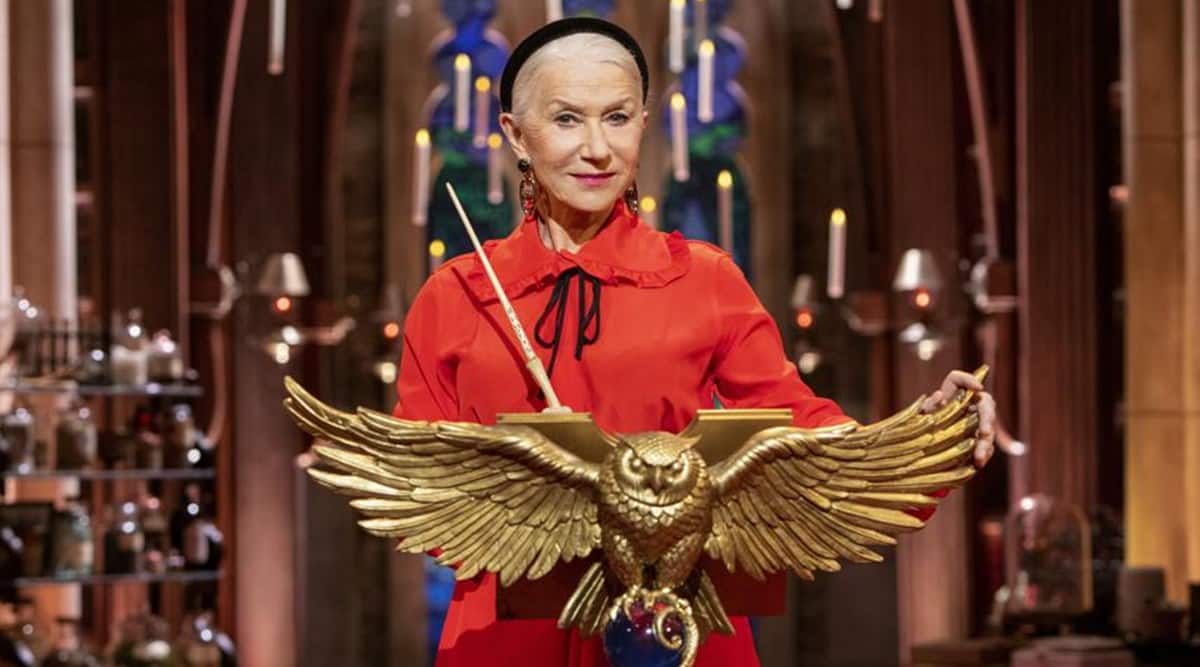 Helen Mirren is oddly absent from the Harry Potter film franchise that proved close to a full-employment act for Britain’s acting greats. But she’s found her own path into its magical world.

Dame Helen, as the Oscar, Emmy and Tony-winning actor is properly addressed, makes her debut as a quiz host with Harry Potter: Hogwarts Tournament of Houses. The weekly, four-part series begins 8 pm EST Sunday on TBS and Cartoon Network.

In episode one, contestants representing the Gryffindor and Hufflepuff houses field trivia questions about J.K. Rowling’s novels-turned-films in a bid to claim a championship trophy and prizes.

Helen Mirren left the cramming to the players and is unworried about being a novice game show emcee.

“I can certainly play a strict host,” she said, drolly.

Mirren’s willingness to take on something different shouldn’t raise eyebrows. She’s celebrated for her regal roles — including The Queen, Elizabeth I and Catherine the Great — but also counts the Fast & the Furious movie franchise among her varied credits.

Her return to a comic book-based project is upcoming: She plays a mythological goddess in Shazam! Fury of the Gods. Mirren’s baptism in the genre came with the film Red and its sequel.

In an interview with The Associated Press, Helen Mirren discussed her admiration of the Potter canon, making a TV fashion statement, and female bonding on the set of the DC Comics-based film. Remarks have been edited for length and clarity.

You’ve had an eclectic acting career, and now you’re adding your first game show to the resume.

Absolutely, which is why I signed up for it. I’m always up for a bit of an adventure. Also, of course, it’s a wonderful subject and at a great moment, the 20th anniversary (of The Sorcerer’s Stone, the first Potter film). And the very fact I was never in any Harry Potter movies — much to my chagrin, I might add. It was a great way to to be able to participate in the whole extraordinary phenomena that is Harry Potter.

Are you a fan of the stories?

What I remember very clearly was when the whole world of Harry Potter started rising. The most magical thing is the way the books were passed from hand to hand amongst kids, and adults sort of didn’t know anything about it. It wasn’t like it was published with great fanfare. A lot of the people who’ll be competing (on the show), they will be in their 20s, 30s, 40s, but they will have past experience with Harry Potter as a kid.

Have you watched any TV competition shows for tips or sought advice on hosting?

I thought I’d just play it by ear and be as natural as I could. I’m personally very excited about it, so hopefully I’ll communicate that. I’ll be probably as nervous as the contestants themselves, and I’ll try to hide that.

You aren’t playing a role with the costume dictated by your character, but was there a certain look you wanted as a host?

That’s an interesting question. The set, as you will see, it’s so extraordinary, it’s a beautiful, beautiful Harry Potter world that they’ve constructed. So I did want what I wore to reflect a slight costuming feel. And in a way, I’m playing a kind of a character. So, yes, I wanted it to be a sense of costume and presentation. It’s got a slight sense of vintage about it, and a sense of belonging in that world.

In the sequel to Shazam! you play Hespera, daughter of Atlas. Is she a hero or villain?

I’m not going to tell you the answer to that. You’re going to have to ascertain for yourself. I’m a member of three goddesses: Lucy Liu as Kalypso and the third goddess played by Rachel Zegler, who will be a huge star in a very short space of time. So there are three of us together, and that was really a great experience because it’s so infrequent that you get to spend a whole of a movie with two other women. So often you’re the only woman in the cast. Here we were a trio, and that was great. I loved it.