Mohanlal will share screen space with Suriya in the project, which is tentatively called Suriya 37. The Malayalam superstar started shooting for the Tamil film, after finishing his first schedule for Lucifer 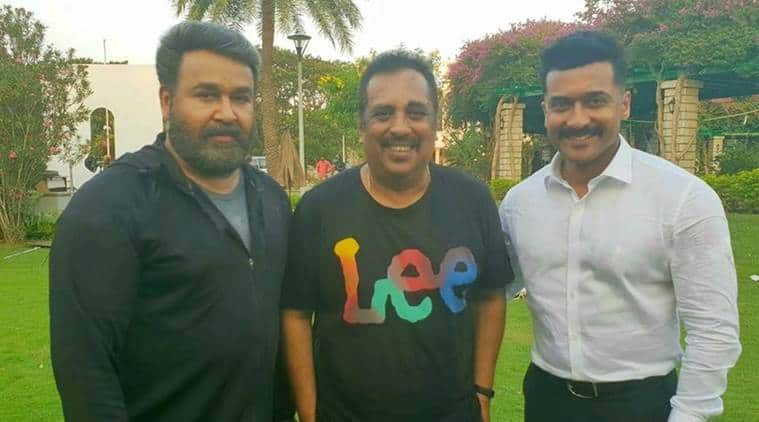 The social media is flooded with pictures from the sets of KV Anand’s film revealing the look of Suriya.

Malayalam superstar Mohanlal joined the sets of director KV Anand’s upcoming multi-starrer in Chennai recently. Mohanlal started shooting for the Tamil film, after finishing his first schedule for Lucifer, which will mark the directorial debut of actor Prithviraj.

Mohanlal will share screen space with Suriya in the project, which is tentatively called Suriya 37. The film’s crew returned from London after completing a schedule recently.

Anand has put together a solid star cast for his third outing with Suriya after Ayan and Maattrraan. Apart from Mohanlal, the film also stars Arya, Boman Irani, Sayyeshaa and Samuthirakani among others.

Suriya 37 has composer Harris Jayaraj, cinematographer Pattukottai Prabhakar, and art director DRK Kiran in the crew. And Lyca Productions is bankrolling the project.

The social media is flooded with pictures from the sets of Anand’s film revealing the look of Suriya. The Singam star is sporting a crew cut, suggesting that he might be playing the man in uniform in his forthcoming movie. The pictures of Suriya dinning with Mohanlal is also doing the rounds on the social media.

.@Suriya_offl back to his Kaakha Kaakha days with his new makeover for #Suriya37. He just refuses to age! #Mohanlal too, with his sophisticated look! pic.twitter.com/Whlk6NaiSy

Stunning looking @Suriya_offl from #Suriya37 shooting spot who is back to his ‘AnbuChelvan’ kinda getup. Refreshing to see him in a such a stylish way. Probably the best in the recent times for a big star?! pic.twitter.com/mw2nyCLw13

Meanwhile, Suriya is also shooting for his maiden collaboration with director Selvaraghavan titled NGK-Nandha Gopalan Kumaran. The film was initially set for a Diwali release. The filmmakers, however, recently announced that the release will be postponed due to production reasons. The film has Sai Pallavi and Rakul Preet Singh as female leads, and Jagapathi Babu in an important role.