Penguin is one of the most interesting projects I’ve worked on, says Keerthy Suresh

Excited to watch Keerthy Suresh-starrer Penguin? Follow this live blog for all the latest updates about the Amazon Prime Video release.

Keerthy Suresh-starrer Penguin was made in Tamil and Telugu simultaneously.

Keerthy Suresh’s latest movie Penguin is set to release on Amazon Prime Video on June 19. The film, which was made in Tamil and Telugu simultaneously, is touted to be a mystery-thriller.

Written and directed by debutant Eashwar Karthic, the plot of the movie revolves around the kidnapping of a child and follows the struggles and agony of a distraught mother. Keerthy, who won the National Award for her role in Mahanati, will be playing such an intense character for the first time in her career.

As theaters remain shut during the lockdown, many filmmakers are opting for a direct OTT release. Following in the footsteps of Jyotika’s Ponmagal Vandhal, Penguin is the second high-profile Kollywood movie to release on Amazon Prime Video.

Penguin is jointly produced by Karthik Subbaraj, Kaarthekeyen Santhanam, Sudhan Sundaram and Jayaram. The technical crew of the film comprises Kharthik Phalani and Anil Krish for cinematography and editing, respectively. Santhosh Narayan has composed the music for Penguin.

Follow all the latest updates about Keerthy Suresh's Penguin

Keerthy Suresh shared some behind-the-scenes photos from her upcoming film, Penguin, on Twitter. 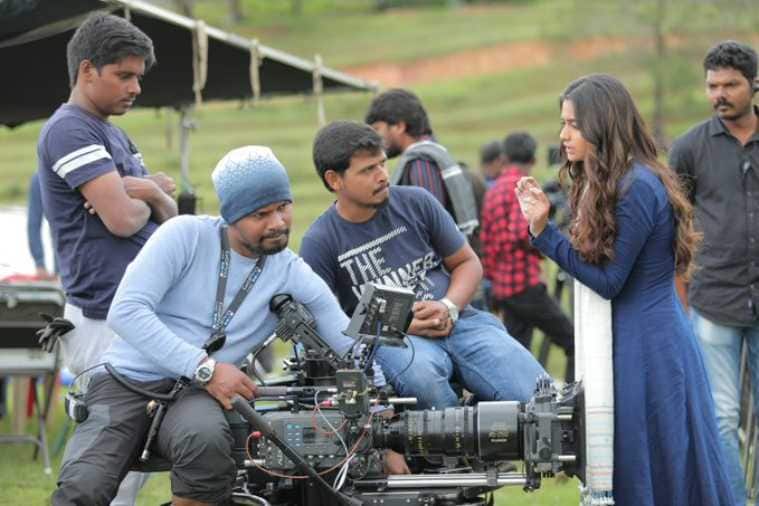 Here's the teaser of Penguin:
Kaarthekeyen Santhanam: Fantastic to collaborate with Amazon Prime on such an important project

One of producers of Penguin, Kaarthekeyen Santhanam, expressed his happiness over collaborating with Amazon Prime for the movie. He said, “We are so happy to be a part of Prime Video’s ever-growing global community. While we’re not new to working with digital platforms, it’s fantastic to have collaborated on such an important project with a global partner like Prime Video.”

Check out some stills of Keerthy Suresh from the much-awaited upcoming film, Penguin.

In an interview with The Federal, Penguin director Eashvar Karthic discussed the backdrop of a hill station in the film. “I waited for the monsoons to capture the beauty of the locations, which had been shot by DOP Kharthik Palani. Since I belong to the area, I was familiar with every nook and corner in Kodaikanal and that helped me shoot in good locations,” he said.

He also explained the meaning behind the title ‘Penguin’. “The penguin is the most protective mother after the orangutan. It is the perfect mother in the animal kingdom and I’ve introduced a few elements related to it in the film that justify the title,” he added.

Karthik Subbaraj, who is bankrolling Penguin under his Stone Bench Films banner, praised Keerthy Suresh and debut director Eashvar Karthic. “At Stone Bench Films, we are committed to telling unique stories, while ushering a new wave of Southern cinema, backed by fresh voices and perspectives. This marks the incredibly talented Eashvar Karthic’s directorial debut, on a script that he has written. Prepare to watch the powerhouse performer Keerthy Suresh in a completely different avatar,” he said in a statement.

Watch the Penguin trailer here:
Keerthy Suresh: Penguin is one of the most interesting projects I've worked on

In a statement, Keerthy Suresh spoke about taking on the role of a mother in Penguin. She said, “Penguin has definitely been one of the most exciting and interesting projects I’ve worked on. As a mother, Rhythm is both gentle and caring, but also fiercely determined. She’s complex, but authentic, and I think that will really strike a chord with audiences. I had a wonderful time working with the incredibly talented Eashvar Karthic to bring the story to life.”

User @sridevisreedhar shared her excitement for Penguin release on Twitter. She said, “#Penguin countdown starts!  The trailer gave us the chills,  Music is superb and that the extremely talented @KeerthyOfficial is the protagonist makes the wait worthy. FDFS on @PrimeVideoIN  June 19 #PenguinOnPrime @EashvarKarthic.”