Singer-lyricist Arunraja Kamaraj of Kabali fame has turned director with Kanaa. Based on women’s cricket, the film has Aishwarya Rajesh playing the titular role.

Though the storyline revolves around the life of a woman cricketer, it also explores the relationship between a father and his daughter. For the uninitiated, Kanaa means dreams.

Arunraja, for a long time, was in search of a female actor who could play cricket and finally zeroed in on the Kaaka Muttai girl. While Sathyaraj plays the protagonist’s father, newbie Darshan also plays an important role in the film.

Read all the updates from Kanaa press meet in Chennai.

The whole shooting experience was like attending a university, says Arunraja Kamaraj

"The whole shooting experience was like attending a university. There was so much exchange of learning. I have to thank all my friends who wanted me to become a director. Their hope is why I am here today. Music director Dhibu is also my college classmate. Dhibu has put in his 100 per cent hard work. He is so much passionate about music," says Arunraja Kamaraj.

My friends have directed me, says Arunraja Kamaraj

“Dream big - this is what the film is all about. Siva once asked me if I had some story in mind. I told him three lines. Siva likes cricket. And not many films have come out on women s cricket. I had my friends helping out on the story. They had helped me out with many things in life. And when everyone calls me a director, I feel happy. But the truth is, my friends have directed me. They play quite an important role in my life. The first half involves a different style of narration. The second one, vice versa. We shot the entire film like how a cricket match happens. Sivakarthikeyan never discussed money with me though I asked him many times. He was so helpful and cooperative. ‘Kaasa paththi laam neenga kavala padadheenga,’ he said. I think I blabbered something to Sathyaraj sir during the script narration. Glad he understood what I meant. Because I knew I was not a good story narrator. Then I met him with the bound script and he was very satisfied. We shot once around 2 am. He was that involved,” says Kanaa director Arunraja Kamaraj.

Kanaa should also be a hit like Dangal, says Sathyaraj

“It is not usual to invite sound artiste of the film during the press meet. I am happy the crew has invited him to the stage. Aishwarya Rajesh is an extremely hard-working artiste. It is not easy to learn something and perform. Without knowing cricket, Aishwarya has mastered the game. And now she can bowl on par with an Australian bowler. Kanaa should also be a hit like Dangal. Because it has a universal theme. I am sure everyone is going to shed a tear during the climax. Arunraja is a filmmaker with a social conscience. We have discussed many things on the sets. When a society driven film wins, it is good for both cinema and society,” says Sathyaraj.

"We have attempted something different and I hope Kanaa will garner positive reviews," says Aishwarya Rajesh.

I saw my father in Sathyaraj, says Aishwarya Rajesh

"Usually I talk a lot, but for Kanaa, I don't know where to start. Thanks to Arunraja the director. Though I had an intention to work hard, team Kanaa made me do this. Without them, I would not have done anything. They pushed me to work really hard. My dad passed away when I was 10. I saw my father in Sathyaraj. I had many pleasant experiences while shooting. Blessed to have a co-producer like Kalai. Darshan has performed really well. Ramdoss is a fantastic actor. Thanks to him as well," says Aishwarya Rajesh.

“It is an important film for me. And I can't thank Sivakarthikeyan enough for the opportunity. The film was a huge learning experience. Aishwarya had put in a lot of hard work for Kanaa. She got hurt while shooting. The makers made me feel comfortable. Siva anna told me I had performed well. And that was a huge compliment. Sathyaraj sir is like a teacher and a guide," says Darshan, who makes his debut as a lead with Kanaa.

"So relieved that Kanna is hitting screens on December 21. Because I quite liked the concept. Happy that I travelled with Sathyaraj for Kanaa. The film explores a sensitive idea - like how a girl from a village background thinks big and wants to become an acclaimed cricketer. Aishwarya Rajesh should become famous like Aishwarya Rai, because she deserves it,” says Ilavarasu.

"I am proud of having shared screen space with a veteran actor like Sathyaraj,” says Ramdoss.

Kanaa will make you laugh and cry, says Editor Ruben

"I thank Arunraja and Siva for their trust in me. At first, I thought it was going to be difficult. Because I told them I didn't know both cricket and farming. Then they told me Aishwarya herself didn't know cricket. She learnt the game. All actors were like a family and shot for the film. Kanaa will make you laugh and cry. For different reasons, everyone has given their best. Had I got a father like Sathyaraj's character in the film, I would have become a editor in my 20s. We are all a part of Arunraja's dream. And I am glad I am involved in Kanaa,” says Editor Ruben. 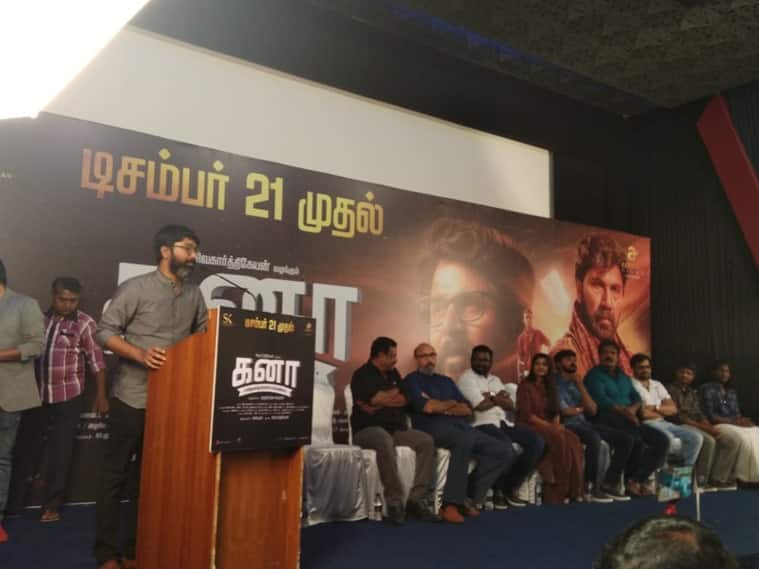 The trailer of Kanaa is being screened for the press.

ODI captain Mithali Raj in a video speaks about sports and gender bias. “Women aren't being given equal opportunity to shine. The society also doesn't encourage women to play the sports,” says Mithali.

Kanaa producer Sivakarthikeyan is not present at the press meet as he is abroad shooting for his upcoming project.

In a video, the crew offer insight into the making of Kanaa. Real women cricketers were involved in training Aishwarya Rajesh.

According to sources, Kanaa actor Aishwarya Rajesh was trained for three hours every day by multiple coaches.