Kalaga Thalaivan movie review: Yet another generic story about a protagonist taking on a corporate monster, the film is bearable thanks to its well-though out action sequences. 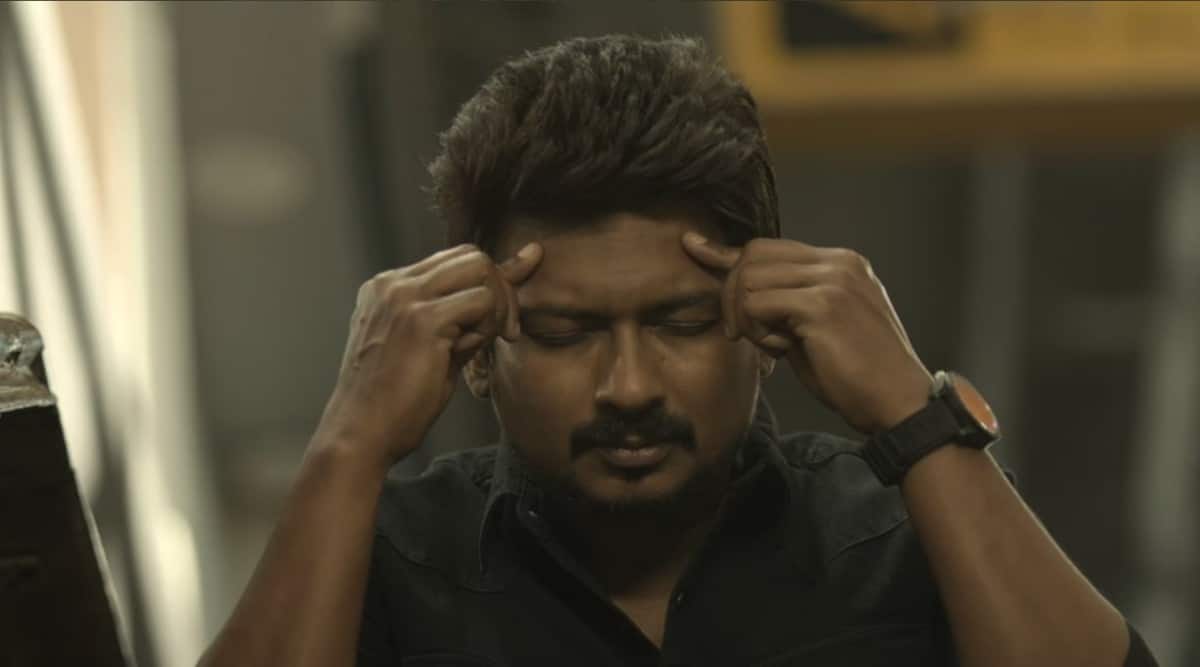 Kalaga Thalaivan’s director Magizh Thirumeni wants his film to be perceived as intelligent, but he doesn’t hold the audience in the same regard. He conveniently forgets the dictum, ‘Show, not tell’, as he offers us an exposition-rich feature where everything is shown and explained, and then underlined. It’s not as if the story is complex, and warrants explanation. Kalaga Thalaivan is a generic story of a hero trying to take down a ‘corporate monster’. Yes, there are some interesting ideas, but the screenplay and dialogues hit you on the head with them till you can take no more. Instead of a film taking you on a journey, Kalaga Thalaivan has the director snatch you by the hand and walk you through a maze that he has created. Along the way, he marvels at his creation as you look on.

His tour starts right from the introduction scene of Thirumaaran (Udhayanidhi Stalin). A middle-aged employee at a corporate office is tasked with something that he is clueless about. His boss breathes down his neck –literally–asking him to do the job under his supervision. He looks helpless and anxious. The moment his manager walks away to take a call, the poor employee lets out a sigh, “Aandava (Dear lord!)” Suddenly, his computer starts to work automatically and does the work swiftly. Though we get that the hero is remotely helping him out, Maghizh shoots the scene at an excruciatingly slow pace so that everything is spelled out. That doesn’t end there. Later, the employee meets Thiru and spells out to us that he used TeamViewer to help him out. He makes such a big scene out of a TeamViewer; imagine how the rest of the film about corporate espionage would have panned out.

Thirumaaran is depicted as indulging in corporate espionage as he sells secrets of his employer, a heavy-vehicle manufacturer. When it is revealed that the company’s vehicles don’t pass the emission test, the corporate villain hires a team of nameless sophisticated hitmen to find and terminate the rat. Thus begins the cat-and-mouse game between the formidable hitman Arjun (Arav) and Thriumaran, which is the only rewarding portion of Kalaga Thalaivan. There are two brilliant stretches in the film. One comes just before the interval and the second one is the climax. It feels like the whole film was written around them or just for them. If only the director had put the same amount of writing and effort into the rest of the film, Kalaga Thalaivan would have been a far more engrossing affair.

As far as the rest of the film goes, it shuffles between sequences of torture porn and a sheepish romance between Thiru and Mythili (Nidhhi Agerwal). On one end, Arjun keeps coming up with creative methods of torture to make his suspects spill the beans. On the other hand, you get some uncreative courtship of the lead. However, both end up being irksome and seem like fillers before the end credits can roll. What ends up making the film passable are the innovative ideas (though sporadic) and a well-cast villain (Arav is brilliant). Despite playing a formulaic role, Arav’s character works mainly due to his physical demeanor. I wish the film was only about his hunt for the protagonist. Clearly, that seems to be the strong zone of the director. But in an attempt to create what is generally called the “emotional core”, he ends up delivering a formulaic backstory that ends up being counterproductive.

Vasan Bala unpacks why Monica, O My Darling is his toughest film