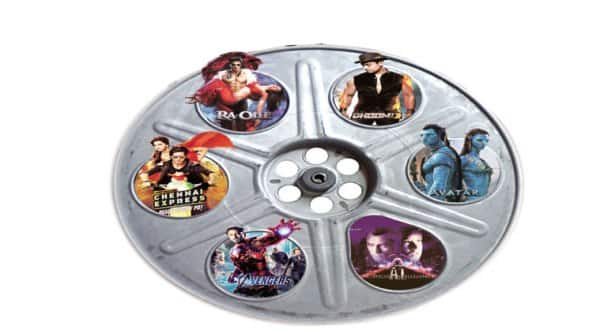 The marketing mastermind that Shah Rukh Khan is known for — he strategically planned every activity around both his films Chennai Express and Ra.One. From promoting the films across television channels on different shows, and launching differentiated products around them to planning the best on-ground marketing strategies, he did it all.
After the success of Chennai Express in 2013, in a Press Trust of India (PTI) interview, Khan remarked that he promoted Ra.One fanatically because it was a new genre in India. “I have been talking about Chennai Express a lot because many think it’s an action film, but it’s an out and out comedy,” he explained.
The promotions of CE involved the launch of a game, Chennai Express: Escape from Rameshwaram that was developed by Disney-UTV’s digital wing. As far as Ra.One is concerned, being a superhero film it created enough buzz from the day it was announced. The launch of the teaser trailers during the ICC Cricket World Cup gave the film an added advantage. Games, digital comics featuring characters from the movie, and Khan’s extra effort to connect with his fans through platforms like Google Plus were other things that were a part of the marketing strategy.
Dhoom 3, however, decided not to follow the convention. Instead of the promotional blitzkrieg that every film was becoming a part of, the third film from the Dhoom franchise, rode more on Aamir Khan’s stature. Rather than spending the moolah, the marketing team of the film created curiosity around it by not revealing everything to the audience. Malang, a song that became hugely popular after the film’s release, was not uploaded completely on YouTube even after few days of the film’s release. Aamir, in interviews during the release of the film, said he wanted to whet the audience’s appetite by creating a certain mystery around the film. While the team opted for a subtle promotional strategy, it rode high on brand tie-ups for its merchandise that included Hot Wheel bikes, dolls etc, besides a game for a Windows phone.
Even in the case of Hollywood movies, the promotions on the digital platforms worked really well.
For its 2012 release, The Avengers was promoted at the 2010 San Diego Comic-Con International, during which a teaser trailer narrated by Samuel L. Jackson was shown. Later, a global Twitter chat, comics around the six superheroes in the film and games were launched. In India, the trailers of The Avengers (that was distributed by Disney-India) was promoted in a big way across various media platforms like Hindi movie channels, etc.
Followed by a buzz-generating trailer launch, Twentieth Century Fox collaborated with The Coca-Cola Company to launch a worldwide marketing campaign to promote Avatar, the highlight of which was the launch of a website AVTR.com. The marketing campaign was followed by the launch of multiple games across platforms and also a 224-page book Avatar: A Confidential Report on the Biological and Social History of Pandora (James Cameron’s Avatar).
In the case of Artificial Intelligence, a 2001 film, the marketing bug was still catching up. Still, an alternate reality game titled The Beast was launched around the film, besides a premiere at the Venice Film Festival and of course the repeated trailers on television.
The best way to promote a film is by repeatedly running its commercial trailer, believes Karthik Lakshminarayan, COO, Madison Media. “Various interactive appearances on TV shows and at other places are the other things that work,” says Lakshminarayan, according to whom the presence of any film on the digital platforms in a big way also works in favour of the films.

Interestingly, the three Hindi films that have topped the charts in terms of marketing, have stars to boast of. For that matter, even the three Hollywood movies have either the franchise (The Avengers), which is no less than a brand that is working in its favour; or famous directors like Cameron and Spielberg who are associated with it.
Marketing strategists believe that the association of a big name with a film plays an important role. Yusuf Shaikh, Head – Distribution, Acquisition and IPR Management, Percept Picture Company, Percept Limited thinks there’s a reason why a film like Artificial Intelligence that released in 2001 has a recall value even in 2014. “It’s a Steven Spielberg film with a unique plot. That works in its favour even today. The name sells,” he says.
That’s the major reason for each of these six films to have generated the right buzz. “The magic of the Khans works amid the Indian audience. Clubbed with the aggressive promotions that they opt for, and it just adds more value,” says Deepak Netram, Vice President at the media agency Lodestar UM.

According to Netram, however, besides the brand name, another thing to have worked is the series of firsts associated with each of the Hindi films. “Ra.One was the first film to have Shah Rukh as a superhero. In Dhoom 3, Aamir was playing a double role as well as a negative character for the first time, while Chennai Express rode big on the association of director Rohit Shetty and Shah Rukh, which was also happening for the first time,” he explains.
According to Shaikh, another thing to have worked for these movies is the release date — a Diwali release for Shah Rukh’s film and a Christmas release for Aamir’s. “Nothing can work better than a holiday release,” he says and adds that Indian families, even across the globe, are pulled by this strategy.
However, Lakshminarayan thinks that the best thing to have worked for CE and Ra.One was communication across media channels. “It included TV, radio, cinema halls that worked exceptionally well,” he says.
Netram, talking about AI, points out that what would have brought AI at the top would be its well-planned television premieres. “That really helps a film. In fact, that’s the reason why a film like The Mummy still gets a good viewership,” he says.
The promotions around Cameron’s Avatar weren’t that great in India, believes Shaikh. “But there was a lot of interest around the film, keeping in account its relation to the Indian mythology. As it is, both Avengers and Avatar are curated products that would catch the fancy of the audience because of its differentiated content,” says Shaikh, who also believes that sometimes marketing over-drive kills the product. He praises Aamir Khan as the actor took the subtle path during Dhoom 3, and let the audience create the hype by putting out just what was needed. “He didn’t raise the expectations of the audience for the film. He let it build on through word-of-mouth publicity,” remarks Shaikh.
As Netram concludes, “It’s not the money spent that helps a product, it’s the idea and how well one integrates the product on the mediums it is being promoted.”

It is important to change with times