On the rocks from the roll

As AC/DC drummer Phil Rudd faces charges of ‘threatening to kill’ plus possession of methamphetamine and cannabis, he faces an uncertain future. 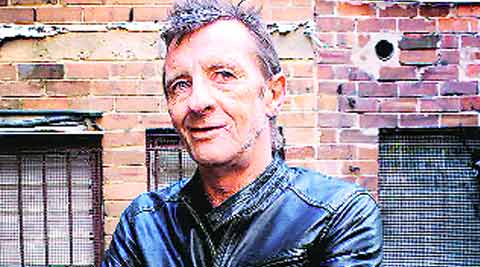 The 60-year-old has become a virtual prisoner in a town that for years had seemed to accept him and his excesses with a knowing wink.

AC/DC drummer Phil Rudd was the toast of Tauranga, a quiet New Zealand coastal community, when he celebrated the launch of his surprise solo album at his marina restaurant, Phil’s Place. Even the mayor was there.

Less than three months later, posters promoting the album plaster the windows of his waterfront home, protecting his privacy, after police raided it earlier this month and filed serious charges against him. The  60-year-old has become a virtual prisoner in a town that for years had seemed to accept him and his excesses with a knowing wink.

He’s avoided serious consequences from previous brushes with the law, but the stakes are higher this time: He’s charged with threatening to kill, which comes with a maximum prison sentence of seven years, as well as possessing methamphetamine and marijuana. An even more serious charge that alleged Rudd tried to hire a man to kill two people was dropped due to lack of evidence.

There are also questions about Rudd’s future with the Australian band he’s been part of on-and-off for almost four decades. AC/DC guitarist Angus Young said he hasn’t been in touch with Rudd since his arrest and that his behaviour had been erratic when they were recording their new album, Rock or Bust, which is due to be released December 2.

“He’s got himself in a pickle,” Young said, adding that the band’s tour next year will go on with or without him.

Rudd has long tried to live out the male adolescent dreams that form the fabric of the straightforward rock songs of AC/DC. But surprisingly he’s done in it in a place that has long attracted retirees, drawn by the pleasant weather, the nearby beaches and the quiet. Tauranga is home to just 1.15 lakh people, although boosters like to point out that it will soon be New Zealand’s fifth-biggest city.

Rudd has described how he spent his first big paycheck on a Ferrari. He’s collected many more toys since then — a hangar at the town’s airport to fit in his luxury sports cars and his helicopter, a motorboat moored near his restaurant.

The person police claimed in documents was the would-be hit man works in an industrial neighbourhood. Colleagues say he’s disappeared and is laying low. He earlier told Fairfax Media that Rudd felt unsafe after disputes with hookers over payments.

That Rudd’s lifestyle was taking a toll on him became apparent when he ventured out of his preferred seclusion in August to promote his solo album, Head Job. He seemed to have aged years, his face appearing hollow and sunken.

In interviews, he didn’t bother wearing dentures and mumbled his way through answers. “I’ll give up smoking when I die,” he told TV3. “Until then, I’m gonna have a good time. All the way.”

Rudd’s home is modern and luxurious but not ostentatious.

Neighbour Malcolm Young, 70, who is no relation to AC/DC’s co-founder with the same name, said Rudd laughed when he first introduced himself because of the coincidence.

He said he sees the young women coming and going, but otherwise isn’t much bothered by his famous neighbour. And he says Rudd, who has six children, has brought his cars to charity events over the years to help raise money.

“We knew he was the drummer, but it didn’t make a difference,” said Tauranga Mayor Stuart Crosby.

In 1988, an English judge ordered Rudd to pay model Lorraine Irish about $26,000 after Rudd took her for a spin on a speedboat and crashed into a yacht.

In 2010, Rudd was caught with 25 grams of pot on his boat but convinced a judge to cancel the conviction after arguing it would prevent him from touring with the band. This year, he was accused of lying after he tried to renew his pilot’s licence and said on a form he had no history of drug use. A judge said he was very suspicious of Rudd’s answers, but that wasn’t proof enough to convict him.

Born in Australia, Rudd has lived in the region since 1983, when he had a blow-out fight with Young and left the band. He rejoined 11 years later.
“He was a very quiet person,” said Tony Currenti, AC/DC’s drummer before Rudd. “He did his talking through his drumming.”

But AC/DC was also a band with big ambitions. “It was mainly Malcolm who would say, ‘Forget Australia. We are going to be a worldwide band’,” another former band drummer, Noel Taylor, said.

And Rudd enjoyed the ride.

“We nailed it. Conquered the world, mate, that was the idea from the start. A little Napoleon in all of us,” he said while promoting his solo album.

There were signs things weren’t right with Rudd and the band even before his arrest. Jesse Fink, who wrote the book The Youngs: The Brothers Who Built AC/DC, said he was “gobsmacked” Rudd had done a solo album given the total commitment demanded by AC/DC.

Rudd, meanwhile, is due to appear again in court on November 27. He will again face the glare of publicity he has long sought to avoid in the quiet town he’s made home.

Maharashtra: CM, ministers to gather at RSS headquarters in Nagpur on December 2 for ‘guidance’