BTS’ V protected Jimin from bullies in school, told Big Hit to take him in the band: The VMin friendship 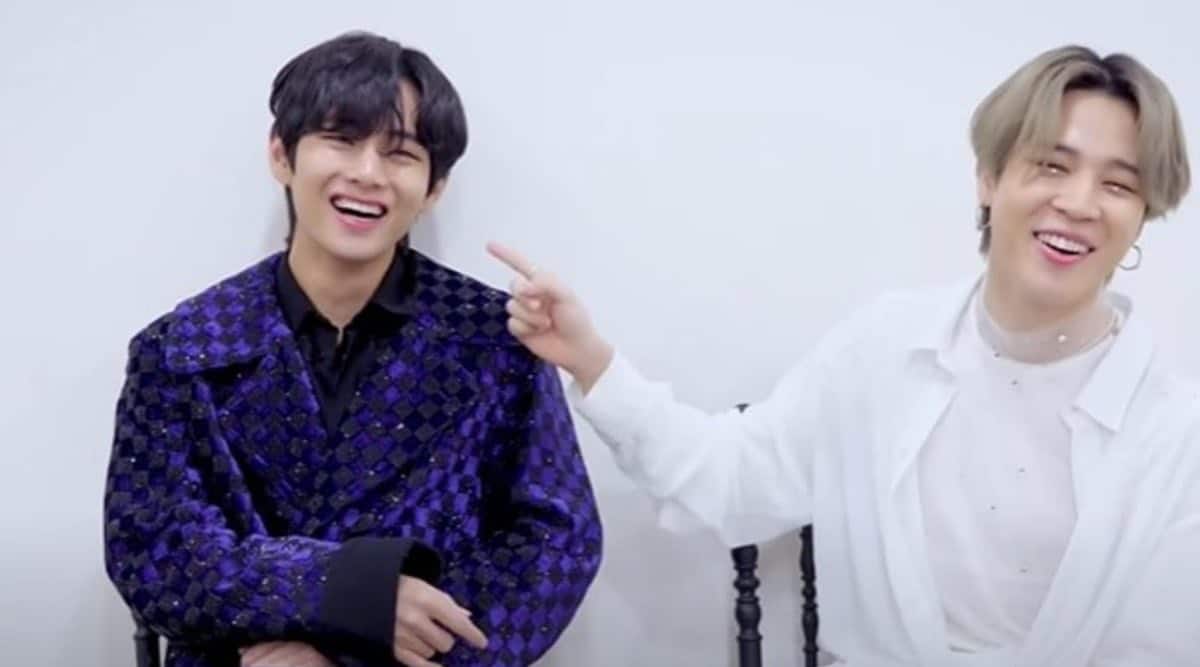 BTS members and their ARMY have previously expressed their need to protect Kim Taehyung aka V. RM, Jin, Suga, Jimin and Jungkook have often waxed eloquent about his playful innocence and ‘untainted vibe’, as well as his childlike behaviour.

Several of V’s iconic honest moments have been caught on camera—be it shutting down Ellen DeGeneres on her own show when she asked about BTS’ affairs with fans, or declaring that he was too perfect to forget dance steps, or just talking earnestly about his goldfish in serious interviews. It’s no surprise that ARMY as well as other BTS members cherish the Maknae (young brother in Korean), even if they have to reprimand him gently on occasion.

Also Read |When BTS’ V cried after a heated argument with Jin during a concert, RM comforted him with a hug

While V celebrates a close friendship with all his brothers spawning numerous ships such as Taekook, Taejin or Taejoon, on his birthday, here’s looking at his complex friendship with Jimin, the band member he has known since school days.

‘Happy to debut with you’

Both the band members were close friends before they became bandmates. When Jimin and V joined Big Hit before BTS, they were eventually transferred to new high schools in their second year. Owing to his Busan accent, many of Jimin’s classmates in Seoul mocked him. V supported Jimin throughout this time and they became close friends.

During their show Bon Voyage, V read out a letter to Jimin, which mentioned that he praised Jimin in front of Big Hit executives, who were reluctant to select him for the band. He wrote, “Before our debut, you once got anxious about it. At the time, I had a meeting with the company and they asked me what I thought of you being on the team. I thought it over and said that you were there for me through the ups and downs. You were the one who laughed and cried with me. So I said that it would be good if such a good friend could debut with me. It felt good to say that and I was happy to be able to debut with you.”

He also added in the letter, “When I cry in the bathroom, you’re there to cry with me. You come at dawn to laugh with me. You care about me and have me in your thoughts. I love you buddy.” This letter left Jimin in tears.

Jimin said, “I don’t know what others might think. I actually learn a lot from him. He makes me feel good and touches my heart often. That’s when I’m grateful to have Taehyung as my friend. So I want to say I’m grateful.”

During the Carpool Karaoke with James Corden, the other BTS members revealed that V and Jimin are the two members who tend to squabble the most. Their friendship is fraught with many fights, some which the duo has laughed over later. However, things weren’t particularly easy in the early days. In 2019, during Bangtan Attic, V revealed Jimin would be more sensitive as he had anxiety issues since his trainee days and differences would crop up between the two. V revealed that Jimin would argue with him a lot. Jimin justified it by saying that they were two different individuals with a different mindset.

“He was sensitive about the differences we had, so it was hard for me to reach him,” V said. Jimin added to it saying that he would just flare up every time and hence one day, Jungkook and V had to have a conversation with him about controlling his temper.

Small tensions aside, several fights between the two have left ARMY amused. One particularly famous fight is when they squabbled for two days over dumplings. The incident first came to light with the song “Friends” released as part of Map of the Soul: 7. The song featured the line – “Our memories are each a movie on its own/The dumpling incident would be a comedy movie yeah yeah.”

In June 2020, the singers revealed that they were at loggerheads over when they should eat. While V wanted to eat dumplings in between the practise, Jimin suggested that they eat once they’re done since the members too hadn’t eaten at that point.

“We didn’t talk for two weeks. That’s when I was working on that drama (Hwarang) so if I craved something, I had to eat it. I was so young. So I said I want to eat during practice but he said ‘none of the members have eaten yet, it’s not nice if you eat first so let’s eat after we’re finished.’ So I said, ‘Hey! I’m hungry! I have to eat first! It won’t take that long. Just wait.’ It was this. We got touchy over this. We were all touchy back then. All the members,” V said in an interview shared on BTS’ YouTube handle.

This got the rest of the members frustrated, and they told the two to take it outside instead. Apparently, this fight lasted for two weeks.

Their other squabbles include fighting over a bunk bed, and a packet of chips—which have all been detailed in their V-Lives and other videos.