Wonder Women movie review: It seems as if Anjali Menon has reached a plateau in her ability to psychoanalyse the problems of modern city dwellers. She repeats the obvious facts about human suffering and deliverance, with little to no perception. 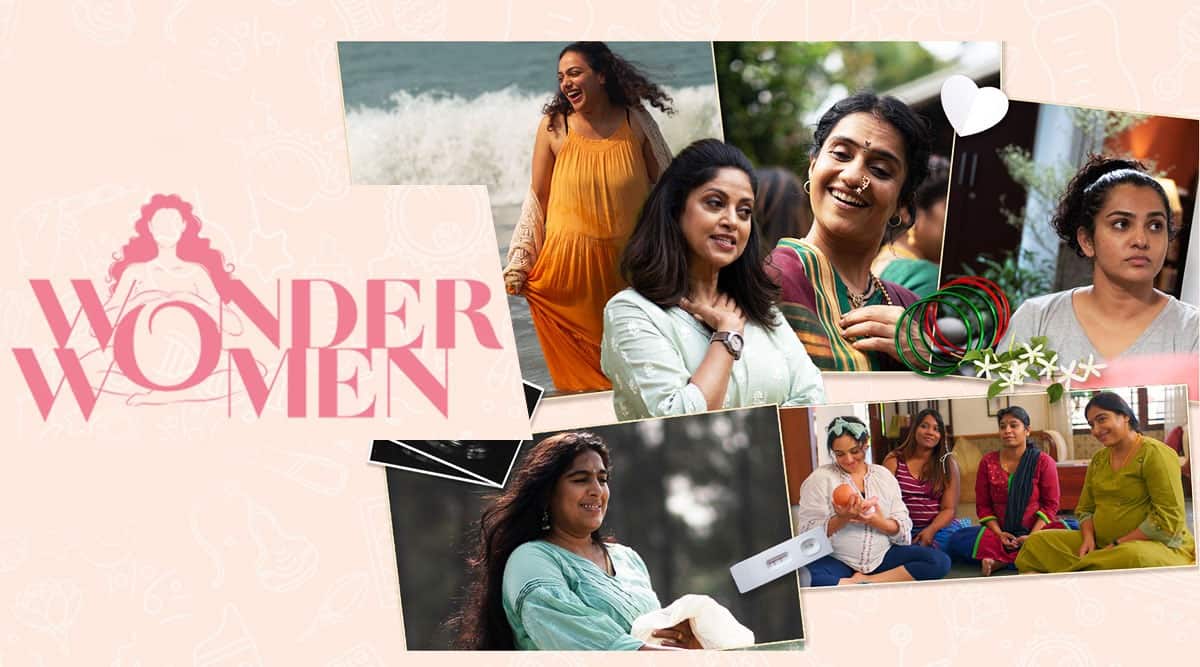 Filmmaker Anjali Menon’s latest film Wonder Women tells the story of a group of expectant mothers, who meet each other at an upscale home to practice breathing exercises and yoga, and get their daily fill of gossip. This very personalized experience is led by Nandita (Nadiya Moidu), who offers moral and emotional support to expectant mothers. And for some reason, Anjali thinks it is perfectly fine not to explain to us what Nandita’s gig is all about. She probably believes, we all know a place where wealthy pregnant women go to feel loved and protected?

Does Nandita offer her counselling services for free? Does she charge a fee? What are her credentials? If she does it as a public service, why does she seem to cater to the emotional needs of just a certain social class? Anjali must have assumed that all people need to use such services when they are pregnant. A bit elitist, is it not?

The narrative focuses on the relationships that these women – Nora (Nithya Menen), Mini (Parvathy Thiruvothu) Veni (Padmapriya Janakiraman), Saya (Sayanora Philip), Gracy (Archana Padmini), and Jaya (Amruta Subhash) – forge at Nandita’s wellness centre. Sumana becomes a place for these women to find the strength to deal with their personal and emotional struggles. We only get hints about the problems each of them faces in their personal lives, and the film wants us to fill in all the details.

Also Read |After Ponniyin Selvan 1 and Kantara success, production houses are scouting South India for the next big pan-India hit

The ensemble of main characters is so familiar and they all behave in predictable ways. The emotions the film tries to evoke seem so forced; and some of the sequences are unrealistic. In a pivotal scene, Nandita organises a session for all the prospective parents she mentors. She has them sit in a circle and asks the husbands to open up to their wives. And they surprisingly follow her instruction by pouring out their souls. For some reason, the husbands who had trouble connecting with their pregnant wives in the privacy and security of their homes, shed their inhibitions at Nandita’s command and reveal some very intimate details about their thought processes. Anjali should have found a better way to get the husbands to open up about their fears of fatherhood, the risk of losing their wives and accepting the quantum transformation that comes with the arrival of a child in their lives. Anjali takes the shortcut to cover a range of emotional turbulence, both subtle and overt, that one faces from the moment one learns of pregnancy.

The whole set-up of Wonder Women feels a little off and definitely half-baked. The narrative feels as if it was improvised scene by scene on the set with no solid script or vision behind it. Most of the conversation happens in English as all the characters are from different backgrounds. Even though the film has a cosmopolitan character, it takes a bit of adjusting to the film’s language style. At times, the language feels pretentious rather than emotional. Even if you look past these problems, it is still very hard to identify with the characters and what they are going through.

It seems as if Anjali has reached a plateau in her ability to psychoanalyse the problems of modern city dwellers. She repeats the obvious facts about human suffering and deliverance, with little sense of balance. Is it because the film only shows the women and not their problems, thus ruining any potential for drama? The only time this film raises the pulse rate is when these pregnant women cross busy streets.

Nadiya Moidu goes into her role as a middle-aged wellness provider like a fish in water. She seems too comfortable in this role. Perhaps, this awareness of the audience also affects the chances of connecting with the film. Nithya gets more to do than Parvathy, who spends the entire film with a poker face, and the burden of inexplicable sadness. Parvathy adds nothing to the experience or adds little meaning to the narrative. Padmapriya is charming as a good-natured and very considerate companion.

Anjali must have had only one goal in mind when she wrote and directed Wonder Women – to make this film sweeter than her other films. If you know her filmography, Bangalore Days and Koode, you know that feel-good is the default mode of her films. Her films are designed to trigger happy chemicals in our brains. Her goal is to deliver films that are like a warm hug, that release oxytocin, and make us feel calm, safe and loved. Her films tell us that despite all the terrible things happening around us, we can still find a place in the sun if we connect with those around us on a spiritual level. But Wonder Women, alas, is just not that film.

Wonder Women is streaming on SonyLiv.