There is one thing going for Last Christmas, apart from the generous use of Michael's peppy hits. It poses a question regarding the world's obsession with "being special", and wonders, why can't one just be.

Last Christmas movie review: Emilia Clarke tries to be her effervescent best, and her million-watt smile does make it all go down easy.

Emma Thompson is the writer/screenwriter/co-producer, plus one of the main cast members, of Last Christmas. Emilia Clarke was one of the multiple-award-winning members of The Game of Thrones. Henry Golding and Michelle Yeoh still bear the halo of the success of Crazy Rich Asians. Paul Feig is the director behind hits like Bridesmaids, Spy, and the new Ghostbusters. Last Christmas calls itself “inspired” by George Michael.

That all must add up to something.

Let’s just say the film is a long way from ‘must’. Its protagonist Katarina or Kate (Clarke) is the kind of selfish, snarky and smug London-dweller who only a Phoebe Waller-Bridge can pull off — before they all find their way. She crashes at friends’ homes, only to either kill their pets or destroy stuff accidentally, sort-of works at a shop which sells Christmas trinkets all year round, dressed as an Elf, and fancies herself as a singer of George Michael songs and Christmas carols. The shop is owned by Yeoh, who calls herself Santa, just to complete the experience. And, in one of the film’s many silly jokes, Kate believes her Chinese employer’s name is actually that.

One fine evening, Kate looks out the shop window and sees whom but Tom (Golding) loitering around, looking up. He takes her for a stroll around the city during the course of which he shows her a “secret garden”, points out the fairy lights twinkling in London’s “narrowest” alley (which won’t seem very narrow to you), teaches her ice skating on a deserted rink — while cycling around delivering stuff as a courier, and working as a volunteer with people suffering from stress and at a homeless shelter. Yes, it’s as dreamy as that.

Clarke tries to be her effervescent best, and her million-watt smile does make it all go down easy. However, Golding is much too insipid to hold up the other end, not to say the disappointing plot which meanders from the mundane to the silly.

Thompson does lift up the proceedings a bit as an immigrant from former Yugoslavia who is still scared the Communists may come looking. However, the film only introduces this strain for a laugh, making short shrift of the immigrants in the time of Brexit, as much as it does of its homeless. Unlike Kate, her sister Marta is a successful lawyer (parallels to be drawn to Fleabag again).

There is one thing going for Last Christmas, apart from the generous use of Michael’s peppy hits. It poses a question regarding the world’s obsession with “being special”, and wonders, why can’t one just be. Or, in this case, why can’t one just not be. 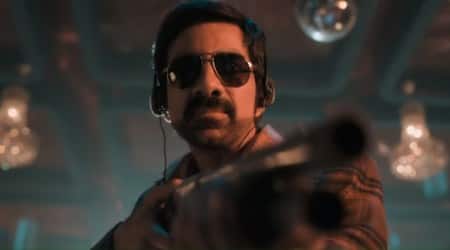