Kaalakaandi movie review: Akhsat Verma’s directorial debut is very much of the it-happened-one-night format, where all kinds of people are on the move, and stuff happens. Saif Ali Khan makes the most of his part, even though you wish it had a little more heft. 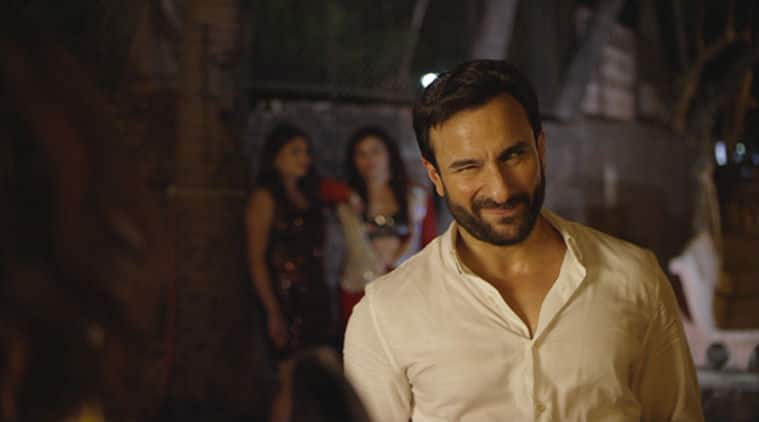 Saif Ali Khan is at his funny best in Kaalakaandi.

What would you do if you are faced with some terrible news? If you are Saif Ali Khan’s buttoned-down character in Kalaakaandi, you gulp down something small and red, and get slung out into the night.

A clean-cut fellow unraveling in messy ways is a great, if familiar, hook. Akhsat Verma’s directorial debut (he wrote ‘Delhi Belly’) is very much of the it-happened-one-night format, where all kinds of people are on the move, and stuff happens. Is it fun? It is, in bits and pieces. Do you stay with it? Again, intermittently.

Here’s your from-all-walks-of-life assortment crisscrossing the dark , rain-washed streets of Mumbai: Saif’s reeling-under-psychedelic-substance character, his about-to-get-married-but-developing-cold-feet brother (Oberoi) and his pretty bride, a red-lipped, large-bosomed, big-hearted transperson (Nary Singh), a young couple figuring out relationship goals (Kapur and Dhulipala) while hanging out with birthday gal (Treasurywala), a good-looking wedding photographer (Talwar), a bunch of goons (Dobriyal, Raaz, Bhoopalam and co), and a bunch of cops.

The whole joy of a film like this is to keep us guessing while pushing boundaries: I expected a little more in the nice-guy-trans hooker encounter, even if was the right degree of warm fuzzy. Except for the moments where there’s freshness, you can see the film mark the beats: the smart-talking ‘f’-word using party animals, the foul-mouthed ‘ma-behen’-spewing gangstas, and the in-between people (many of these actors were in Delhi Belly), doing pretty much what you expect them to do.

Saif Ali Khan makes the most of his part, even though you wish it had a little more heft. Still, it’s good to see a performer with innate style and panache working in tandem with an ensemble.

A particular set piece has Saif (coloured rubber-bands sticking up in hair, a faux yellow grubby fur collar around his neck, raccoon eyes) putting himself out there, reminiscent of Birdman, and you think, okay now, something strange-and-life-affirming is about to happen. But it peters out, and you’re left savouring a what-might-have-been sequence, and film.

Kalaakaandi is a Marathi term for ‘mayhem’ (no, it has nothing to do with the sweet ‘kalaakand’), but there’s not enough of it, resulting in the film being more a no-stakes stroll, rather than a breathless roller-coaster. You know that ‘iss raat ki subah ho jayegi’.