Ek Villain movie review: Sidharth Malhotra is watchable, he just seems so nice and wholesome all the time. It is Riteish Deshmukh who sweeps the stakes. 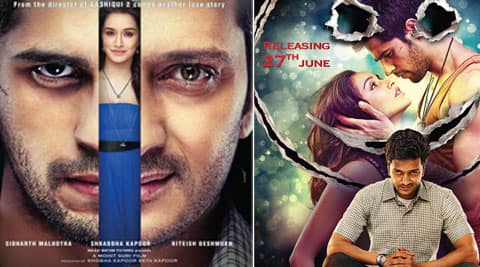 Ek Villain movie review: Sidharth Malhotra is watchable, he just seems so nice and wholesome all the time. It is Riteish Deshmukh who sweeps the stakes.

There’s one in every love story, says the tagline of Ek Villain, and the film strains every sinew to justify it. The three main characters — Guru the loveless orphan grown into a gun-toting goon, Aisha the pretty girl busy ticking off items from a to-do list, and Rakesh the smarting-under-daily-humiliations-working-stiff — ricochet off each other, resulting in a film doused in schmaltzy romance and creepy violence.

Mohit Suri has a gift for vivid characterisation, even if some things are underlined a tad too much. He also does a good job with weaving high-octane moments around his characters. So you don’t really twig on to the plot’s hokeyness to begin with, as Guru (Malhotra) encounters the sprightly chatterbox Aisha (Kapoor), and the grimness dissolves into softness, and as Rakesh (Deshmukh) becomes increasingly aware of his oppressed state from one day to another. Then begin a spate of killings, and a race to the bloody finish.

But soon you start noticing the wooliness of the story, which has more than a passing resemblance to a Korean cult slasher film, as it weaves confusedly back and forth in time, from the singing lovers to the ghastly murders. The tone becomes inconsistent. Ek Villain’s swinging between drama and melodrama is its weakness: the portions  I bought into kept me engrossed, and then I was back in those in which I couldn’t suspend disbelief. A cop says: “Usne usi jagaah panaah li hai jahaan usne gunaah kiya”: at a mushaira, even a policeman can turn poetic, but alliterating, in the heat of the moment, panaah and gunaah?

This was fine for the ’80s Bollywood, when dialogue writers lavished couplets upon cops and robbers and lovers, when heroes slowed down their punches for villains to recite their pun-laden lines for our enjoyment. But now the device smacks of artifice. And it takes away from the performances in this film: apart from the leads, there is a lecher (KRK) firing off tips on how to “keep wives in control”. He is effective enough for you to want to keep him away from all women.

Shraddha Kapoor is getting better slowly, and has a couple of high points when the audience laughs with her. Sidharth Malhotra is watchable even if he has a hard time doing menace — he just seems so nice and wholesome all the time, even when he is crunching bones. It is Riteish Deshmukh who sweeps the stakes, his eyes dead and speaking at the same time. Deshmukh has played second and third wheel in fourth rate comedies, and always managed to stay visible. Here, he made me sit up and watch.

Suri is an innate story-teller, and can keep things moving. All he needs is a strong, all-the-way credible, original plot.