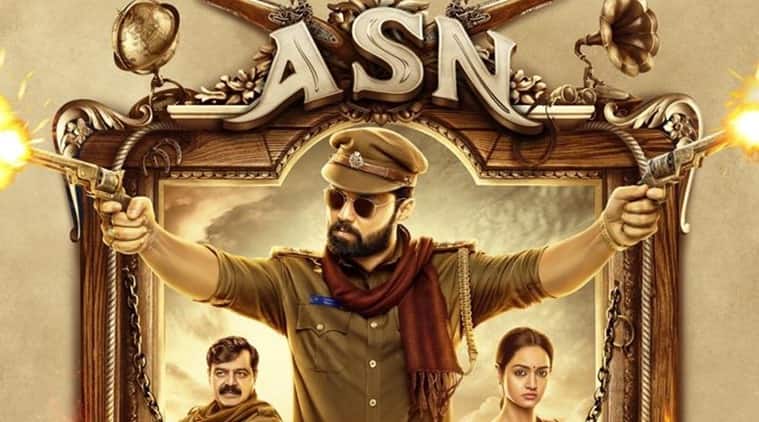 Avane Srimannarayana, the title of Rakshit Shetty’s latest film, has a very fond place in the history of Kannada pop culture. It is the line that causes Hiranyakashipu (Dr Rajkumar) to fly into a rage in the mythological movie Bhakta Prahlada. And hence, the writers and director Sachin Ravi did not shy away from including the iconic scene from the 1983 movie while introducing Narayana (Rakshit Shetty), the inspector of the god-forsaken village called Amaravati.

People enjoying Bhakta Prahlada in a tent theater suggest the story is set in the 1980s. Amaravati is a lawless land haunted by a ruthless tribe called Abhira. The members of the community identify themselves as Abhiras or you can simply call them dacoits. The seasoned tribe of armed robbers get outfoxed by seemingly innocent members of a drama troupe. The head of the troupe gets greedy and robs government treasure, which had caught the imagination of the tribe’s chief Rama Rama (Madhusudhan Rao). Rama catches all the responsible artistes and slaughters them. But, in a rush, he makes a grave mistake. He kills the first-time thieves assuming he has the treasure within his reach. But, he was wrong. And thus begins the long and gruelling hunt for the hidden treasure.

Avane Srimannarayana is set in a distinctive space which feels familiar and yet far removed from the world we know. On the one hand, the film presents Narayana as a prophesied saviour who is destined to liberate the honest people of Amaravati from the evil clutches of Abhira tribe. And on the other hand, Narayana himself doesn’t believe in his legend. He is a selfish cop with flexible morality. And this conundrum helps the film in more than one way. Firstly, it prevents the filmmakers from indulging in non-stop worshipping of its protagonist (like KGF: Chapter 1). A hero who doesn’t take himself seriously is a welcome relief. Next, it gives a distinctive and lively quality to the protagonist in a place, which is largely populated by people who move and talk like they were heavily sedated.

The way Rakshit Shetty and his team of writers have written Narayana, however, has problems. The over-smartness of the hero doesn’t develop into something bigger and significant. The film promises that there is more to the hero than meets the eye. And we wait. We wait for the hero’s true nature to leap out at us like Narasimha avatar from the movie Bhakta Prahlada. We wait for the hero to elevate his intelligence and surprise us with his lesser-known skills. But, it never happens. Make no mistake, these are not my unmet expectations from the film. These were the promises made by the film in the process of narration. The film leads us to believe that the protagonist has a bigger motive and greater good behind his actions.

I think the major setback was the writers’ decision to reveal too many details too early in the film. I am talking about Narayana confessing his deeds while re-telling the history of the treasure. That was avoidable as it only adds to the run-time without serving any greater purpose.

The performance of Balaji Manohar as Jayarama is a big plus for Avane Srimannarayana. He is the main antagonist, and he poses a massive challenge to the protagonist. Usually, the villains are dumbed down in mainstream movies to make the heroes look more appealing. But, Jayarama is determined, clever and physically stronger. The scene when Jayarama is overcome by his affection and decides not to go ahead with the killing of his father Rama Rama for the throne was a real surprise. It subverts how the filmmakers use patricide to underline the evil nature of power-hungry villains.

In spite of its flaws, Avane Srimannarayana is an important Kannada film. To put it like Narayana, the history of Kannada cinema could be divided into before and after Avane Srimannarayana. It could be even termed as Kannada cinema’s first big motion picture of the 21st century. Not only because of its budget but its intention to push the envelope and explore various genres and styles of filmmaking as opposed to sticking to worn-out formula.